“A person who was doing rural work about 30 miles south of Jacinto Arauz observed a couple of weeks ago the unusual commuting of a pair of unknown lights in the sunset sky, at very low height. ′′ The Solo Man ′′ was at the place where he had installed his camp. From there he could see a dim light moving beneath another brighter object that was suspended in the air. Shortly after both lights melted into one and walked away from the scene at high speed.” (Google translation)

Jorge Gabriel Román uploaded this report to his Facebook page, where it was picked up by La Arena and other media sources. La Pampa is a sparsely populated province in central Argentina and Jacinto Arauz is a small town there that's dependent on agriculture. The witness didn’t appear to have reported his UFO sightings to anyone at this point. However, what he saw the next day caused him enough concern to report both incidents.

“The following day he resumed his work and about 500 meters from the camp he found a mutilated animal, like so many others around the world. The man was accompanied by his dog, who at that time began to bark. He brought his pet closer to the body of the dead cow to eat some of his meat, but this one didn't want to approach. Images give account of the typical cuts that are made in these mutilation cases.” (Google translation)

Román points out that the photos (see them here) resemble other mutilations he has seen, both in pictures and in person. Román appears to be a local, if not national, authority on cattle mutilations and he reiterates that these incidents and UFOs often go hand-in-hand (or hoof-in-hoof?), causing many to conclude aliens hare harvesting body parts for inspections. This is obviously difficult to prove and raises many questions. Why would ETs travel all this way and only take samples of cows? The UFOs in this case were bright lights, which can belong to helicopters and drones – the witness does not report hearing any sounds. 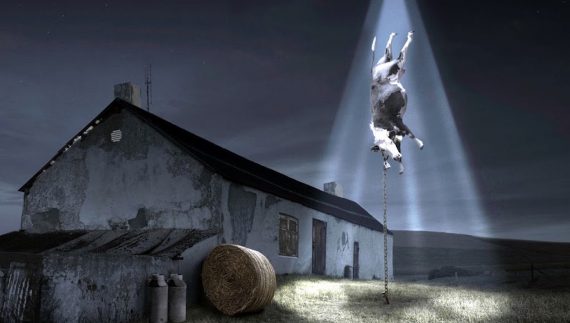 On the other hand, Román reminds us of the strangeness of these mutilation deaths – the animals appear to have simply fallen down dead, other animals show fear of the corpse (as the witness’ dog did). This case had another strange characteristic of animal mutilations.

“A few days later, following his activities in the surroundings, the worker was able to find that the animal's body was still exactly the same.” (Google translation)

The corpse showed no decomposition from decay nor by scavengers or insects. That trait often puzzles veterinarians brought in to investigate, with no reasons given for it. It doesn’t appear that a vet checked this one, but Jorge Gabriel Román did.

“Returning to the field where "The Solo Man" met the enlightened sky, I imagine him waiting for the silent flight of another unknown light of go one to know who, choosing which animal to maim, go one to know why.” (Google translation)

He’s a poet too. Too bad that doesn’t help solve the mystery of cattle mutilations.

Ghosts and Hauntings of Ancient Egypt