When an asteroid struck Earth near Mexico’s Yucatán Peninsula around 66 million years ago that killed off the dinosaurs, tons of destruction was left behind, such as the huge Chicxulub crater, a blanket of dust that blocked out the sun, lowered temperatures, and a massive tsunami. While it was previously known that a tsunami would have happened after the impact, new research has provided more details such as its massive size.

The tsunami would have occurred in the Gulf of Mexico and was thought to have sent a huge tidal wave into North America. The tsunami was believed to have been almost a mile in height (1,500 meters) that was followed by several smaller pulses.

A discovery of fossilized megaripples from the massive tsunami that were found in sediments in the central part of Louisiana has shed new light on this highly debated topic as noted by Sean Gulick who is a geophysicist at the University of Texas, Austin, but was not involved with the study, “It’s great to actually have evidence of something that has been theorized for a really long time.”

Over ten years ago, seismic imaging data was collected by Gary Kinsland who is a geophysicist at the University of Louisiana. After studying the data – specifically a layer that was approximately 1,500 meters beneath the ground – he and his colleagues discovered the fossilized megaripples. Incredibly, the ripples were each separated by about a kilometer (0.62 miles) and had an average height of 16 meters (52.5 feet).

It is believed that the megaripples were left behind when the waves of the tsunami came near the shore in 60-meter-deep water which ultimately disrupted the sediments on the seafloor. He backed this up by drawing a perpendicular line that ended up exactly at the Chicxulub crater. “The water was so deep that once the tsunami had quit, regular storm waves couldn’t disturb what was down there,” he explained. (A picture of the megaripples can be seen here.) 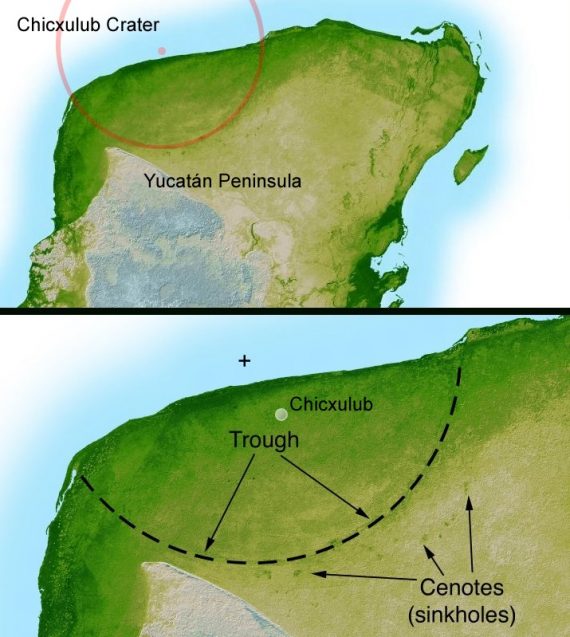 This is just the latest information regarding the devastating impact that killed off the dinosaurs and caused massive amounts of damage to Earth. Alfio Alessandro Chiarenza, who is a paleontologist at the University of Vigo but was not involved with the study, weighed in by stating, “We have small pieces of the puzzle that keep getting added in.” “Now this research is another one, giving more evidence of a cataclysmic tsunami that probably inundated [everything] for thousands of miles.”

The study was published in Earth and Planetary Science Letters where it can be read in full.