Ever thought of the possibility of people being replaced by eerie, evil lookalikes? Well, admittedly, yes I have, but not seriously. In saying that, though, I have to say that the original black-and-white 1956 version of Invasion of the Body Snatchers, starring Kevin McCarthy and Dana Wynter, is one of my all-time favorite productions. It's one of those films that make you think: "Could it really happen?" No, not in the real world, it couldn't. Despite that, the fact is there are those who aren't quite sure this is all just nonsense. Back in the mid-to-late 1990s, several British-based UFO investigators (including some from the now-defunct newsstand publications of that era, such as UFO Magazine and UFO Reality) were given the details of a bizarre story that, they were assured by their Deep Throat-like sources, was absolutely true.

So the tale went, late one night, at some point around 1991 or 1992, a number of animal-rights activists broke into Porton Down, Wiltshire, England – one of the most secretive installations in the UK, whose work focuses to a very significant degree on matters of a chemical and biological nature. If a real-life zombie apocalypse ever erupts, none should be surprised if it begins at Porton Down. When the activists were actively searching for all the many and varied animals they were intent on freeing – mice, rats, monkeys and so on – they entered a room which was filled with dozens of approximately 8-foot-long containers, all carefully positioned on sturdy tables and all containing seemingly lifeless, or sleeping, duplicates of famous, then-current British politicians. The terrified activists fled Porton Down, never to return. Of course, the outlandish tale has never been verified, and as for the activists, there’s not a single one who has gone on the record. 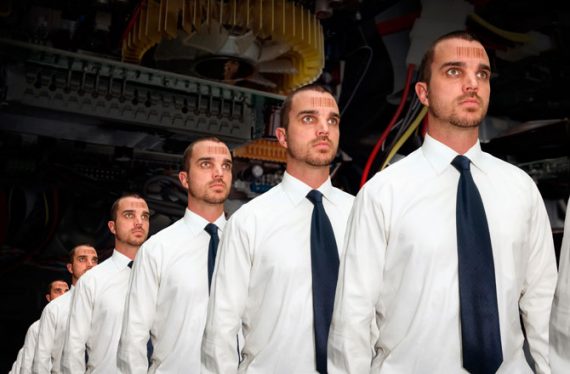 It's inevitable in an article like the one above there is going to be a discussion of doppelgangers. The Britannica website says of the Doppelganger, that it is "… in German folklore, a wraith or apparition of a living person, as distinguished from a ghost. The concept of the existence of a spirit double, an exact but usually invisible replica of every man, bird, or beast, is an ancient and widespread belief. To meet one’s double is a sign that one’s death is imminent." The BBC have addressed this issue, too: "Folk wisdom has it that everyone has a doppelganger; somewhere out there there’s a perfect duplicate of you, with your mother’s eyes, your father’s nose and that annoying mole you’ve always meant to have removed. The notion has gripped the popular imagination for millennia." Consider these words, too, from Atlas Obscura: "Doppelgänger encounters continued in the U.S., with several cases following a pattern of three sightings preceding death. Soon after his election in 1860, Abraham Lincoln saw his reflection doubled in the mirror, with one face beside the other with a ghostly pallor. He tied to show his wife the apparition, which appeared two more times when she was not present. While Mary Todd was at first worried about this behavior, she took the vision as a sign that he would serve two terms, but would die before the end of the second."

The story above brings us to the matter of politicians in the weird world and, bizarrely, supposedly having been replaced by the dreaded "THEM." In December 2018, The Wall Street Journal ran an article titled "Nigeria Gripped by Whether President is a Clone. 'It's the Real Me, I Assure You." In part, it said: "Is Nigeria’s president really Nigeria’s president? At a news conference this month, Nigeria’s septuagenarian head of state, Muhammadu Buhari, sought to refute a bizarre claim that has come to dominate his bid for another term leading Africa’s most populous nation: that he has been replaced by a body double or clone."

Then, there's the 2017 story that the U.K.'s NME published with the title of "Imposter Alert! Nine ridiculous conspiracy theories about celebrity changelings." The NME said: "Fact: conspiracy theories are stupid. Also fact: conspiracy theories are mostly pretty funny. Come then, as we explore nine celebrities whom theorists claim are dead and have been replaced by changeling imposters, based on pretty much no evidence whatsoever!" The famous faces were (in their order) Paul McCartney, Megan Fox, Miley Cyrus, Avril Lavigne, Beyoncé, Britney Spears, Eminem, Taylor Swift, and Katy Perry. Of course, this angle of people being replaced is all just good fun and entertainment. And, that's all it will ever be. Apart in the world of fun fiction.

UFOs in Space: NASA and the Search for Unidentified Aerial Phenomena