Dinosaur Populations May Have Been Struggling Prior to the Asteroid Hit

While an asteroid wiped out the dinosaurs 66 million years ago, a new study has suggested that their numbers were drastically declining for millions of years prior to the deadly impact. The study has stated that extinctions were exceeding the appearance of new species; therefore, making dinosaurs “particularly prone to extinction”.

The experts then created a model that represented the diversity and extinction rates of the groups. Their results indicated that some groups were declining in numbers faster than others. For example, ankylosaurs and ceratopsians were declining in much faster numbers over their last 10 million years on Earth while troodontids didn’t have much of a decrease in numbers in the last 5 million years. Furthermore, the older species seemed to have declined much faster than the newer species. Ankylosaurs’ numbers would decline by 0.6% and ceratopsians by 9.1% when a new hadrosaur species would emerge.

As for what caused the decline in dinosaurs numbers prior to the asteroid impact, climate change was probably a significant factor as temperatures in the North Atlantic dropped 12.6 degrees Fahrenheit during the late part of the Cretaceous Period. When the temperatures dropped, the number of herbivorous dinosaurs started declining.

In an email to Live Science, Fabien Condamine, who is a research scientist at the French National Center for Scientific Research (CNRS) and the Institute of Evolutionary Science of Montpellier in France, explained this further, “Herbivores are keystone species in ecosystems, and their disappearance leads to cascade extinctions.” He went on to say, “This cooling is directly involved in the increase of the extinction of dinosaurs 10 million years before the fall of the asteroid.” “Indeed, dinosaurs were mesothermic [halfway between warm and cold-blooded] organisms and therefore depended largely on the temperature of their environment for their activity.”

On the other hand, he did mention that since only six dinosaur groups were analyzed for the study, “...it is possible that some groups are not in decline.” The study was published in the journal Nature Communications where it can be read in full. 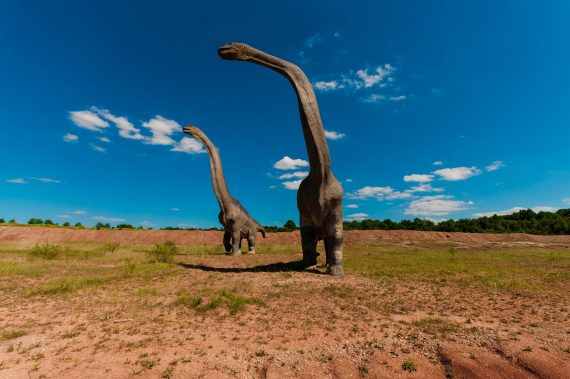 And not everyone is convinced of this new study as David Černý, who is a doctoral candidate in the Department of the Geophysical Sciences at the University of Chicago but wasn’t involved with the study, told Live Science in an email, “I have reservations about how much stock to put in these findings, especially for a group like dinosaurs, whose fossil record is rather limited compared to, say, North American mammals or marine invertebrates.”

While this is very interesting information, more research needs to be done in order to know for sure whether any or all dinosaur species were definitively on the decline prior to the extinction event.