Japan’s UFO Mystery Mountain and its UFO Museum and Lab

There seem to be many places interspersed throughout the world that serve as beacons for UFO phenomena. For whatever reasons these places seem to attract strange things in the skies, and this can be found from New Mexico's Roswell to Australia's Wycliffe Well, very often with local economies springing up to take advantage of the weirdness. One similarly strange place lurks off in the country of Japan, involving  a mysterious mountain which has become a hotbed of UFO phenomena, and which has spurred on the creation of a UFO museum and UFO lab.

Fukushima is the capital city of Fukushima Prefecture, Japan, and tragically the name is known to many as the location of the 2011 Tōhoku earthquake, which was the most powerful earthquake ever recorded in Japan and led to a massive tsunami. The earthquake and subsequent tsunami devastated vast swaths of area, killed an estimated 19,747, with a further 2,556 people missing, caused hundreds of thousands to lose their homes, many of them still displaced to this day, and led to immeasurable economic damage. The tsunami also caused the Fukushima Daiichi nuclear disaster, which was the worst nuclear accident since the Chernobyl disaster in 1986. Yet while to many Fukushima may be synonymous with death and tragedy, many both outside and even within Japan may not be aware that it is also the “UFO Capital of Japan,” and also has what is claimed to be Japan's only research institute for unidentified flying objects. 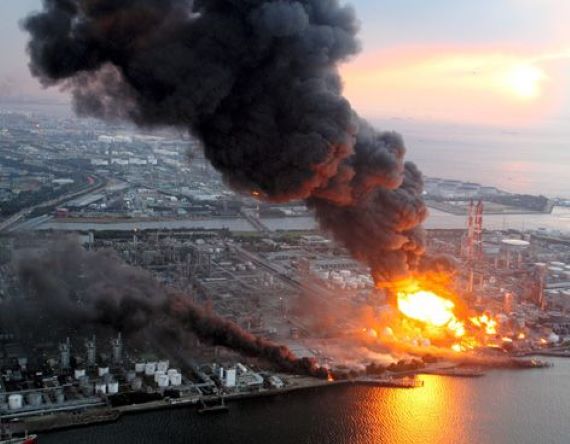 Located within the Date District, Fukushima Prefecture, is what was once the town of Iino, now incorporated into the larger Fukushima City. It is a picturesque, mountainous rural area on the very outskirts of Fukushima City, and is known for the prominent Mt. Senganmori, which looms over the landscape and has a long history of being regarded as an enigmatic place. The mountain has the rather strange quality of being shaped like an almost perfect pyramid, giving it a very mystical ambience that has helped launch plenty of local legends and lore. One of the legends is that the mountain is actually artificial, holding within it a system of tunnels and bases. Other stories tell of the habit of electrical equipment to stop functioning here, as well as tales of people disappearing into thin air, or hikers coming back with stories of missing time. The mountain is also a UFO hotspot, with sightings of strange things going on in the skies here going back decades, only furthering the idea among many that there is an underground alien base here.

Because of this reputation as a UFO magnet, in 1992 the “UFO Fureaikan” was built right on the side of Mt. Senganmori. The UFO Fureaikan is a public facility built with funding from a regional development fund, which serves as a museum for all things UFO. Within the hexagonal building, which itself looks like a UFO that has come down to land on the mountainside, are numerous exhibits on UFOs, including about their history, notable UFO incidents, photo panels, a 3-D virtual theater, and approximately 5,000 items related to UFOs on display, many of them donated from the collection of Kinichi Arai, who was a pioneer in Japanese UFO research, founder of Japan Flying Saucer Research Association (JFSA), and one of the most prominent UFO researchers Japan has ever seen. Among the many photos and other items is the museum’s prized possession, a collection of classified documents claimed to be from the CIA and outlining all manner of top secret sightings and research done by the agency. Arai claimed to have gotten the documents from an American on the inside, and the fact that there are seals and CIA symbols on them adds to the idea that they are authentic. These priceless documents are only very rarely put on display, just one day a year on June 24, which happens to be World UFO Day. On all other days of the year they are mostly kept in the museum’s vault to keep them safe from theft. Toshio Kanno, 70, director of Iinomachi Promotion Corporation, which funded the building of the UFO Fureaikan, has said of this place:

There are many ways, even for the non-enthusiasts, to enjoy the museum. There are those who deny the existence of UFOs and there are those who see the romance and dream in them. It’s okay to have different opinions. Isn’t that what’s nice about it? I think they do exist. I believe in UFOs. Senganmori is no joke. They (UFOs) really show up in the area.

After the Tohoku disaster, the area doubled down on its reputation for UFOs in order to stay afloat in all of the mayhem. The museum and UFOs of Mt. Senganmori were heavily promoted to bring in tourists, with the UFO Fureaikan presently drawing over 30,000 visitors a year. The museum has also expanded, and one of the newer additions is a facility called the International UFO Lab. Founded on World UFO Day, June 24, 2020, and directed by UFO researcher and editor-in-chief of the popular Japanese paranormal magazine Mu, it claims to be the first full-fledged Japanese research institute for UFOs, located right at Japan’s premiere location for UFO sightings. The purpose of the lab, which was set up at the museum’s UFO Interactive Hall, is to “collect, analyze and disclose information on sightings of unidentified flying objects around the world,” and is staffed by locals, officials of a local chamber of commerce and industry, and UFO researchers, as well as accepting online applications for additional researchers, both scientists and UFO nuts alike, to join the team. Mikami has recently said of the International UFO Lab:

Until now, even if UFOs were discovered, the information was shared only on an individual level. I hope the research lab will serve as a base receiving information, and lead to new discoveries. I'd like to get to the bottom of their identity. Particularly during quarantine, look up at the sky and see if you can see anything. I hope the research institute will be a base for receiving more information on UFOs so we can get to the bottom of what they are.

It is all a very mysterious place that has attracted great attention in Japan. It is unclear what is going on here, or why such forces might be drawn to this place. It there something about the mountain itself that holds some power that makes these UFOs gravitate towards it? Is there perhaps an alien base under it as it widely thought? Or is this all just misidentifications and local lore? Whatever the case may be, you can be sure that the UFO Fureaikan and its International UFO Lab will be on the case.

Black Cats of the Paranormal Kind: Mysteries and Manipulation