One of many unanswered questions in the eyewitness accounts and testimonies of military personnel encountering UAPs near their aircrafts or the warships they’re in place to protect is why none of them took any sort of aggressive action and fired upon those UFOs. This question looms even larger after the recent release of the Pentagon’s UAP report, which goes out of its way to emphasize that the government deems this unidentified but seemingly sophisticated objects risks to national security. We may finally have an answer … and it comes from a pilot who himself encountered these UAPs and claims to have first coined the name ‘Tic Tac’. His answer may shock you.

"Once I got the target of interest on my radar I took a lock and that’s when all the kinda funky things started happening. "The erratic nature of the tic-tac. The air speed was very telling to me. Then we started seeing what we call jam strobe lines. Strobe lines are vertical lines that show up on your radar that are indications that you are being jammed."

The tic-tac UFO was jamming the radar of Lieutenant Commander Chad Underwood, the pilot who filmed the now famous encounter in 2004 between his F/A-18 Super Hornet and the USS Nimitz carrier group that was in exercises off the coast of southern California. For the first time since then, he revealed to Jeremy Corbell, the filmmaker responsible for making so many of these videos public, that his jet, and most likely the rest, had its radar jammed by a “target of interest.” If you haven’t figured it out by now, Corbell explains on his Twitter feed how serious this action was.

Corbell promises the release of his entire interview with Underwood is “imminent.” This appears to be his first interview since he talked to New York magazine in December 2019. Until then, David Fravor, commanding officer of the Black Aces group which Underwood was part of, was the media spokesperson for the encounter. Fravor also mentioned the radar-jamming in another interview but did not refer to it as "an act of war." That 2019 interview was where Underwood made his own big reveal.

“The term “Tic Tac,” I actually coined that. So, any time you heard the term, “It looked like a ‘Tic Tac’ out there in the sky,” I was the one that kind of coined that.” 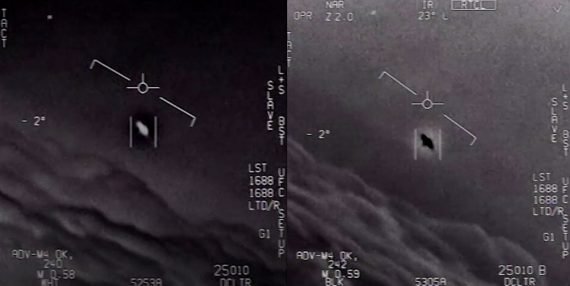 While the look of the UAP was candy-like, it’s performance was anything but sweet to the eyes of a trained fighter pilot.

“The thing that stood out to me the most was how erratic it was behaving. And what I mean by “erratic” is that its changes in altitude, air speed, and aspect were just unlike things that I’ve ever encountered before flying against other air targets. It was just behaving in ways that aren’t physically normal. That’s what caught my eye. Because, aircraft, whether they’re manned or unmanned, still have to obey the laws of physics. They have to have some source of lift, some source of propulsion. The Tic Tac was not doing that. It was going from like 50,000 feet to, you know, a hundred feet in like seconds, which is not possible.”

At that time, Underwood said he didn’t want to call the craft anything but a tic-tac – he had no opinion on “alien beings” and “alien aircraft.” Has he changed his mind since the Pentagon report came out? That seems to be what Jeremy Corbell is implying as he teases with his pre-release of the interview, where disabling weapons is the starting point. What more will Underwood reveal? We’ll be waiting.

Robodog and Robocop: The Future of Law Enforcement?