Philip Corso and the Roswell UFO Crash: Why He Lied About the Real, Terrible Truth – Part 1

Over the last few days I've made mention of the extremely inflammatory story of Philip Corso and his 1997 book, The Day After Roswell. He was a particularly controversial, even mysterious, player who, with Bill Birnes (of the now-defunct television show, UFO Hunters), wrote one of the most hotly-debated books in the history of Ufology.  According to Corso, while working with the U.S. Army’s Foreign Technology Division in the early 1960s, he personally handled much of the supposed alien technology retrieved in New Mexico, back in 1947. More controversially, according to Corso he didn’t just see and handle the materials: he secretly oversaw a project to share the alien technology with some of the United States’ most powerful companies involved in the research and production of advanced technology.

Corso claimed that such technologies as fiber-optics, transistors, night-vision goggles, and certain computer-based materials were all given significant kick-starts thanks to those who studied and – to a degree – somehow managed to replicate the extraterrestrial discoveries. As I said previously, although I was willing to at least address and muse upon Corso's claims, I certainly didn't endorse any of them. I still don't. And, I never will. According to Corso, he saw one of the Roswell bodies at Fort Riley, Kansas in the summer of 1947. He recalled: "At first I thought it was a dead child they were shipping somewhere. But this was no child. It was a four-foot human shaped figure with arms, bizarre-looking four-fingered hands - I didn’t see a thumb - thin legs and feet, and an oversized incandescent light bulb shaped head that looked like it was floating over a balloon gondola for a chin."

Corso added: "I allowed myself more time to look at the creature than I should have, I suppose, because that night I missed the time checks on the rest of my rounds and believed I’d have to come up with a pretty good explanation for the lateness of my other stops to verify the sentry assignments. But what I was looking at was worth any trouble I’d get into the next day. This thing was truly fascinating and at the same time utterly horrible. It challenged every conception I had, and I hoped against hope that I was looking at some form of atomic human mutation. I knew I couldn’t ask anybody about it, and because I hoped I would never see its like again, I came up with explanation after explanation for its existence, despite what I’d read on the enclosed document: It was shipped here from Hiroshima, it was the result of a Nazi genetic experiment, it was a dead circus freak, it was anything but what I knew it said it was - what it had to be: an extraterrestrial." 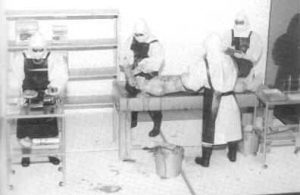 For some people in Ufology, the Corso-Birnes book was just what they wanted to hear: dead aliens and a found Flying Saucer. Others, meanwhile, thought that the whole thing was just too good to be true. As for the Air Force, it kept silent on the matter of Corso – respectfully or angrily, we don’t know. There can be little doubt, though, that the Pentagon found itself in a very awkward position in 1997, when Corso surfaced with his yarn-of-all-yarns. After all, at the very same time that one of their own – Corso – was championing the alien side of the story, the Air Force was doing all that it possibly could to convince people that crash-test dummies were responsible for much of the talk of aliens. With that said, it’s almost time to address the life and career of a certain Major General Charles Willoughby – who just happened to be a good friend and colleague of Corso. Now, we come to the situation I presented in my 2005 book, Body Snatchers in the Desert - and that I expanded on in the sequel, The Roswell UFO Conspiracy of 2017.

In Body Snatchers, I shared information with my readers concerning specific data on experiments undertaken by one of the most evil, deranged, insane organizations that ever existed: Japan's Unit 731. It was a terrible group of people who performed high-altitude experiments on people. People were exposed to chemical warfare and biological warfare. Those behind it all were easily as fucked up and crazy as all those Nazi scientists/scum. Then, at the end of the Second World War - when U.S. military personnel moved into Japan - a variety of classified Japanese military documents were captured and revealed plans for new, huge balloons - far larger than the "Fugo" balloon-bombs of the War, as they were known. More files on terrible experiments were found, too. Much of the material was secretly flown to various military facilities in New Mexico. Several high-altitude, balloon-based experiments took place (also in New Mexico), and using the same plans for those aforementioned, massive Japanese war-balloons. They had the ability to carry a crew of around five people.

Some of those balloons crashed. One them came down on the Foster Ranch, Lincoln County, New Mexico. It's better known as the crash site of the "Roswell UFO." It's a complicated story that led to that famous "Saucer crash" and those "dead aliens." The fact is, though, there were no aliens. But, there were several huge balloon arrays that fell to the ground killing the Japanese crews, and that showered tough balloon material that fell to the ranch floor, and provoking a plethora of wild rumors that still exists to this very day. In part 2, I'll share with you an even more controversial part of this story that no-one in Ufology will want to hear. Certainly, Corso didn't want to hear it. That's why he smothered it all in a story of a crashed UFO.