Remnants of a 4.6-Billion-Year-Old Meteorite Found in a Horseshoe Imprint

Resting neatly inside of a horseshoe imprint in Gloucestershire, England, were the remnants of a 4.6-billion-year-old meteorite from the birth of our Solar System. In fact, the meteorite was around before the planets even began forming. The remnants of a charcoal-black object (approximately two inches in width) were discovered in a field close to the village of Woodmancote by a chemist named Derek Robson.

It is believed that the meteorite came from over 110 million miles away in its “primordial home” in the main asteroid belt that’s located between the orbits of Mars and Jupiter. This is a very significant discovery as it is a type of meteorite called carbonaceous chondrite and belongs to an incredibly rare group of meteorites that have fallen to Earth (less than 5% of meteorites). “Carbonaceous chondrites contain organic compounds including amino acids, which are found in all living things,” explained Robson, adding, “Being able to identify and confirm the presence of such compounds from a material that existed before the Earth was born would be an important step towards understanding how life began.”

Scientists at Loughborough University are analyzing the meteorite fragments with X-ray diffraction and vibrational spectroscopy in order to figure out its composition and structure. Additionally, they are using electron microscopy to analyze the surface morphology and they took some pretty interesting pictures in incredible detail and precision (the photos can be seen here).

What they have discovered so far is that the meteorite wasn’t involved in powerful collisions when the Solar System was first born which is incredible as there were countless collisions that ultimately created the planets and moons. Furthermore, it could have “previously unknown chemistry” (or a physical structure) that is unique compared to previous meteorite samples. 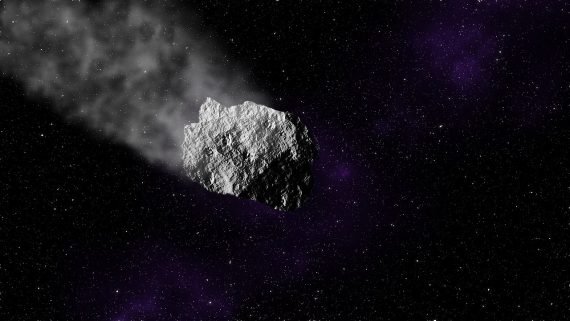 Shaun Fowler, who is a specialist in optical and electron microscopy at the Loughborough Materials Characterisation Centre (LMCC), explained this in further detail, “The internal structure is fragile and loosely bound, porous with fissures and cracks.” “It doesn't appear to have undergone thermal metamorphosis, which means it's been sitting out there past Mars, untouched, since before any of the planets were created meaning we have the rare opportunity to examine a piece of our primordial past.”

He went on to explain the composition of the meteorite, “The bulk of the meteorite is comprised of minerals such as olivine and phyllosilicates, with other mineral inclusions called chondrules, which, for example, can be minerals such as magnetite or calcite,” adding, “But the composition is different to anything you would find here on Earth and potentially unlike any other meteorites we've found.”