Robodog and Robocop: The Future of Law Enforcement?

Back in July 1987, Orion Pictures produced a movie that quickly became a mega-hit just about everywhere. Starring Peter Weller, Nancy Allen, Miguel Ferrer and Kurtwood Smith, it was Robocop. Situated in the U.S. city of Detroit, Michigan in what, back then, was the future, the movie eerily managed to predict what, one day, was to come. As you will soon see. As for the story of the blockbuster movie – that reaped in more than $50 Million – it revolves around a gigantic, powerful organization called Omni Consumer Products. Its staff have an incredible challenge to create a next-generation police officer to deal with the rising chaos and anarchy that has completely overwhelmed Detroit. If the regular police are no longer able to keep control, then clearly something else has to work alongside them – or, maybe, even become the dominating law-enforcement officer from then on. As the title of the movie suggests, Peter Weller’s character – Officer Alex Murphy, who is transformed into something beyond human – becomes something akin to The Six Million Dollar Man meets The Terminator. Welcome to the new breed of cop; one that is half-human and half-machine. And that takes on the bad guys in fine, fierce fashion. A witty, exciting, ultra-violent movie, Robocop, back in 1987, was just a fine piece of well-made science-fiction. More than three decades later, however, what was seen just as fantasy is now on the cusp of becoming all too real. That’s right: in the near future, the police of the decades ahead of us may not be entirely human. They might well be nothing less than fully-functioning cyborgs. If you think I’m exaggerating, I assure you I’m not. Read on. 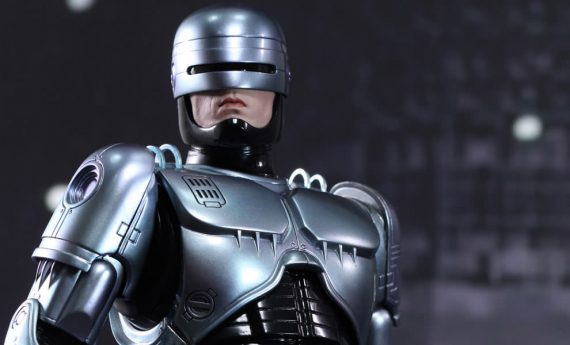 In 2017, Forbes said that: "The Dubai police force is hoping to replace a quarter of its human cops with droid cops by 2030. Should visions of a trigger-happy robot cop be terrorizing your imagination, rest assured this is more of a policeman-shaped help vestibule on wheels than a killer robot with a badge. The uniformed bot cop may be able to read human faces and identify possible miscreants, but it disturbingly lacks a mouth, and its face is a white spread of emptiness embedded with two darkly sunken eyes. Talk about a chilling effect on crime." EDI Weekly expand on this incredible development: "Apart from being able to communicate with people, the Robocop can also shake your hand and offer a military salute. It cannot only identify hand gestures from a distance of up to 1.5 meters, but can also detect people’s emotions and facial expressions. It can figure out when you are happy, sad, smiling or frowning and will itself respond accordingly."

And, there are these words from HuffPost: "Alan Winfield, Professor of Robot Ethics at the University of the West of England, argues there are some serious moral concerns. ‘There are big ethical problems,’ he told CNN. 'If you’re asking a robot to apprehend criminals, how can you be sure that the robot would not injure people?’ He adds that guaranteeing a robot can safely intervene in crime-related scenarios 100 percent of the time is ‘extremely difficult.' 'Of course, when humans make mistakes they are held to account,' Winfield said. 'The problem is that you can’t make a machine responsible for its mistakes…How do you punish it? How do you sanction it? You can’t.' We’re not quite done. Let’s not forget that every police officer needs their dog. In the near-future it may be a robo-dog." ACLU addressed this issue in 2012: "The New York Police Department is receiving a lot of attention for testing robot 'dogs,' which it has deployed in several situations, including to deliver food in a hostage situation and to scout out a location where the police feared a dangerous gunman might be lurking. The state police in Massachusetts have also experimented with these robots, as our ACLU colleagues there uncovered, and police in Hawaii have acquired one. What are we to think of these robots from a civil liberties perspective?"

Newfound Exoplanet is Full of Water and Has “No Known Equivalent”