Seeing the Real Faces of the Aliens? Nightmarish Situations

My previous article was on the subject of Philip Corso's controversial claims in relation to the July 1947 "Roswell UFO Crash" in Lincoln County, New Mexico. The article was mostly on the possibility that the "bodies" found at the crash site were what we might call, in simple terms, "biological robots." And, that they were constructed, rather than born. This makes me wonder if - should the theory have any merit to it, of course - that the mysterious makers of those biological robots might also be behind the likes of the Men in Black, the Women in Black, the Black Eyed Children, and so on - all of who look creepily odd. There's a reason why I specifically say all of this. There's no doubt there are a lot of accounts of people who have encountered strange-looking people and that we might call "semi-humans." And there's no doubt that most of the witnesses to these things have said that it's the faces that gave them away - which is hardly surprising. After all, it's largely our faces that define us. With that said, let's take a look at the cases of a few, really creepy-looking people who might not even be human. 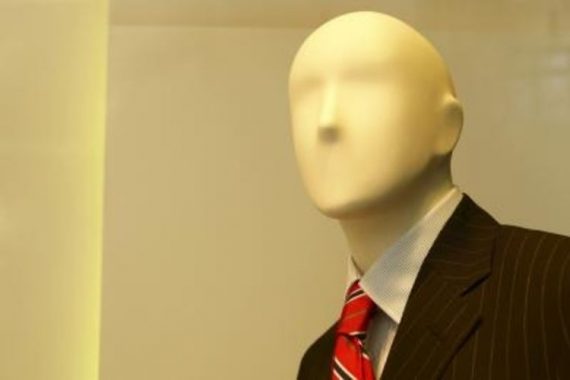 Denise Stoner, co-author with Kathleen Marden on The Alien Abduction Files, told me a bizarre but fascinating story. It involved her husband and occurred in Florida only  a couple of years ago. Denise said: "My husband’s run-in with a possible WIB [Woman in Black] was a few days ago when he decided he would take a bike ride around a lake he travels around on a regular basis and knows it well. If he is feeling pretty energetic, he begins near a pool and park complex, rides the trail nearby and then turns into an area that has a Vet memorial then on around the lake that used to be part of the Navy Base - now new housing. When he entered the path, there was a woman jogging with one of those jogging strollers but the top was down so he could not see a baby inside. This woman had sunglasses on that wrapped around her head and looked way too large for her head. She was thin and about 6 ft. tall. She smiled at my husband as he passed on his bike. She was very thin and pale skinned. He still did not feel uncomfortable because not much scares him. He just thought she was a weird person. As he approached her, she dropped her sunglasses to show him huge black eyes that we at least 4X human size and they wrapped around the side of her head. She grinned again and this time he noticed she did not have a real nose; plus her mouth was long and thin with no teeth - only a dark gap." Denise's husband quit the area - quickly.

The Black Eyed Children are very much the same: at first glance they look like us, but the closer you get, the weirder things get. Their skin is, to say the least, nothing like ours. It's plastic-like. One called it "kinda like wax." Their faces are often like those of a mannequin. Plain, bland, lacking in emotion, and as if sculpted. Or, right out of a factory. One witness said: "His face was so thin and his skin was strange and almost a see-through milky color, no hair that I could see." Others have said that the BEC seem to have come out on conveyor-belts. In other words, the witnesses got the feeling these things were machines, rather than real children, and being dispatched to perform particular tasks. What those tasks might be, it's hard to know, since the BEC are elusive on almost every occasion. One other thing regarding the BEC: it's almost always their not-quite-normal faces that give them away.

In 2015, Dr. David M. Jacobs’ book, Walking Among Us: The Alien Plan to Control Humanity, was published. As the title alone suggests, this is an extremely controversial book. Although it is heavily focused on so-called "alien abductees," it is not actually about abduction events, at all. Rather, its focus is on how abductees are allegedly being used to assist alien-human hybrids whose role it is to infiltrate human society. And, yes, that word "infiltrate" is intended to suggest that nothing good can come from all of this. Or, from any of it. We’re talking about the way in which potentially hostile aliens – with no real regard for us, the Human Race – are working towards a certain, fateful day. A day when the Earth will be so heavily infested with these part-ET/part-human things that the invasion, take-over, and/or extermination, will be completed before we’ll have even a single chance to do anything about it. Yes, I said it was controversial. Even Jacobs notes this when he says: "My research has uncovered a substantial presence of hybrids living on Earth..."

Are all of these strange-looking characters something along the lines of a biological robot? It sounds totally nutty. Just maybe, though, it's not.

The White Rock Mystery: What is This Odd Feature at the Center of a Martian Crater?