Strange and Sinister Characters Who Popped up in History

The theme of today's article is a very strange one: odd and creepy characters who surface at crucial times in history. Who are they? I'll say right away that I have no idea. But, they're out there, for sure. We'll begin with the world's most famous UFO case: the Roswell affair of July 1947. The late Frank Joyce was a key figure in the story of Roswell. When the "whatever-it-was" crashed to the ground on the Foster Ranch, Lincoln County, New Mexico, Joyce was a radio announcer with the KGFL station. Not only that, Joyce was the first to speak with rancher William Ware "Mac" Brazel, the man who stumbled on the huge field of strange debris. And, some have suggested, Brazel may have even seen a damaged body or two on the ranch. Joyce, Jud Roberts and Walt Whitmore, Sr. were all part of KGFL. And they were all threatened not to talk about the incident. It wasn't long at all - around forty-eight hours - before Whitmore, Sr. asked Joyce to go with him to the ranch. Now, we come to our first creepy, weird character. When Joyce got in the car, he couldn't fail to see there was someone else in the car - on the back-seats. It was a man who came to be known as "The Traveler." Here's where it gets really weird. The man in the back was wearing a bright gold outfit. It was somewhat akin to an outfit that a military pilot would wear. The strangeness progressed: on the drive, Joyce popped a soda. There was, however, something strange about that soda. Very strange.

It became clear to Joyce, and quickly, that he had been dosed with, well, with something. The story gets even more bizarre: Joyce was sure he and the Traveler were communicating via something akin to psychic phenomena. Of course, Joyce - high on that mind-manipulating drink - was toasted to the gills at the time. So, it's hard to know how much of that part of the story was real or not. On finally getting to the ranch, Whitmore and Roberts went inside the home. Joyce, though, was told to wait in a nearby shack on the property. Suddenly, a very worried Brazel entered the shack, warning Joyce to stay silent about the now-famous incident. Joyce, although still not in his right mind, agreed to say nothing. When Joyce got back to the vehicle, The Traveler in gold was nowhere in sight. In their 2016 book, The Children of Roswell, Tom Carey and Don Schmitt reveal something incredible: that the military was "…still not sufficiently convinced by Joyce's pledge not to say anything, as he was shortly thereafter gathered up and physically removed to a military hospital in Texas for the next year." The whole thing occurred under very strange circumstances and never really resolved. Moving on, let's take a look at Umbrella Man.

"As Kennedy’s presidential limousine passed by, carrying driver Agent Bill Greer, Agent Roy Kellerman, Governor John Connally, Nellie Connally, President Kennedy and Jackie Kennedy, onlookers waved and attempted to get the president’s attention. Some had small flags, some had handkerchiefs, but most waved their own hands or hats. One onlooker, however, had something far more interesting. As Kennedy’s limo rolled past, the onlooker opened a black umbrella and lifted it into the air. As the limo continued on, he seemed to wave the umbrella in a clockwise motion, as if signaling something. Coincidentally (or perhaps not at all) the opening and waving of the umbrella seemed to coordinate perfectly with the shots fired at the president." Those are the words of Katie Serena in an article on Umbrella Man. Now, it's time for another strange saga.

Within the field of Ufology there are longstanding rumors that the May 22, 1949 death of James Forrestal – the first U.S. Secretary of Defense – was linked to the UFO phenomenon. So the story goes, while suffering from severe depression and anxiety, and ultimately spiraling into a complete nervous breakdown (as a result of his exposure to what the U.S. Government knew about UFOs), Forrestal was on the verge of revealing his knowledge of an alien presence on Earth. The theory continues that powerful figures decided such a thing simply could not be allowed to occur. The result was that Forrestal had to go. And "go," he certainly did: out of a window. In the early hours of May 22, Forrestal plunged to his death from the 16th floor of the Bethesda Naval Hospital. The big question is: was he pushed or did he jump? That's a question for another day. However, we are not short in strange characters in the saga of James Forrestal.

Just a few days before he ended up in the hospital, Forrestal had a curious experience which had distinct Men in Black overtones attached to it. On the day in question, Forrestal received a visit from one of his friends, a man named Ferdinand Eberstadt, someone who was deeply concerned about Forrestal's fragile and paranoid state of mind. Eberstadt (a lawyer, a banker, and the author of a historic 1945 document, "Task Force Report on National Security Organization") was floored by what he saw when he arrived at Forrestal’s home. All of the curtains were closed. Forrestal told his friend – in hushed tones – that listening-devices were all over the house. Sinister characters were watching his every move. His life was in danger. To demonstrate this to Eberstadt, Forrestal carefully opened one of the blinds and pointed, knowingly, in the direction of a pair of shabbily-dressed men on the street-corner.

"They" were a part of a deadly plot, Forrestal assured Eberstadt. In no time at all, the doorbell to Forrestal’s home was heard ringing. The last thing Forrestal wanted to do was answer the door. Fortunately, one of his staff was on hand to do exactly that. A brief conversation took place, but which neither Forrestal nor Eberstadt were able to hear. The facts, however, quickly came to Forrestal from his houseboy. According to what the two men were told, the visitor at the door was trying to generate support that would hopefully allow him to become postmaster in his hometown. Could he come in and speak with Forrestal and have him offer some help and advice? Due to Forrestal's fraught state of mind, the man was sent packing. Eberstadt and Forrestal watched carefully as the man walked directly towards the two badly-dressed men that already had Forrestal in a state of turmoil. It was even more evidence of a conspiracy against him, Forrestal grimly concluded, when he saw the three clearly engaging in conversation. The strange trio was quickly gone. And, in a very different way, Forrestal himself would be gone very soon. 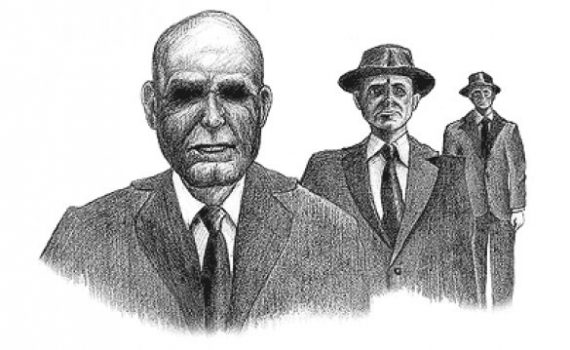 Finally, there are the mysterious Men in Black who descended upon Point Pleasant, West Virginia in the 1960s. Mothman appeared, too, of course. A woman named Mary Hyre played an integral role in the series of 1960s-era events that led John Keel to write The Mothman Prophecies. As an example of many, in January 1967, Mary was visited by a creepy, bowl-haired MIB of around 5-feet in height and who had oddly hypnotic eyes. Throughout the encounter, the black-clad "man" kept staring at Hyre’s ballpoint pen. To the point where Hyre told him he could keep it. He took it, laughed loud in a strange fashion, and vanished as mysteriously as he first arrived. As The Demoniacal notes: "Mary Hyre was the Point Pleasant, WV, correspondent for the Athens, OH, newspaper titled, The Messenger. Hyre documented strange occurrences happening in Point Pleasant in 1966-1967 and was well loved by locals due to her professional and open-minded take on the subjects. In one weekend alone, Hyre received 500 reports of UFO sightings from locals. Hyre’s fascination with flying saucers stemmed from her own sighting of a UFO which she claimed flew over her backyard."

Connected characters? Creepy figures with their own, separate agendas? And why did all of these strange people arrive at specific, notable times in history? The questions could go on and on. The answers, unfortunately, are few.

The Erratic Enigma: A Few of These Ancient Geological “Orphans” Remain Mysterious