Taking a Look at the Manipulative “Trickster” Phenomenon – Part 1

Today's article is focused on the strange phenomenon of the Trickster. Here's a perfect example that defines it: "A Trickster is a legendary supernatural creature that features in the stories, myths and legends of the different tribes of Native American Indians. Tricksters are mythical creatures that are mischievous supernatural beings who take the form of animals such as the coyote, spider, ram, hare and raven. The trickster, who is almost always male, represents uncertainty. The trickster disobeys normal rules and conventional behavior. The trickster loves to upset things and spread confusion. The Trickster can be fun, like a clown, but they can also have a cruel side. The Trickster can be a hero in one tale and a villain in the next tale. His outrageous and totally unconventional behavior might include lying, cheating, tricking, and deceiving. These traits might be unconscious due to the Trickster being a fool lacking in intellect or may have the deliberate actions of a spiteful spoiler who lacks morality."

Now, with that said, let's look at some "things" that have fallen into the category of the Trickster. The Djinn clearly enjoy taunting and tormenting us, too. Sometimes, this can be to a mild degree, and even relatively innocuous in nature, with Djinn moving items in the home of their target, and placing them in other rooms. This is an issue that mirrors the odd antics of so-called Tricksters like elementals, who enjoy manipulating us – chiefly for their own warped amusement. More often than not, however, the Djinn display highly dangerous activity. That very often begins with disrupting electrical equipment – everything from microwaves to refrigerators, computers to telephones, and electric lights to ovens. Sometimes a Djinn will perform a favor for its target – which is specifically where the concept of the “Genie” and the “three wishes” derived its origins. 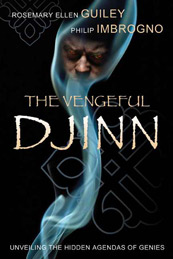 Perceived almost unanimously by Native Americans as a trickster-like animal, the coyote is said to have the ability to control the weather, specifically rain and storms. And, like so many other trickster entities – such as fairies and goblins - the coyote can be friendly, playful, and helpful. But, and also like all tricksters, the coyote has a dark side: it can be manipulative, deceitful, and even deadly, and as the mood takes it. As for what Native American lore says of the shapeshifting abilities of the coyote, we are told that the animal can take on human form – usually in the guise of a man with a large mustache. Coyotes are said to be able to transform into the forms of birds, fish and cats. Also according to Native American mythology, witches and those familiar with magical rituals can transform themselves into coyotes. Thus, a coyote seen running wildly late at night may well be a shapeshifting witch or wizard, embarking on some dark and disturbing mission.

Japan has its very own equivalent: the Kitsune. It is a word that means "fox." Japanese lore has long maintained that each and every fox that lives – and which has ever lived – has the ability to take on the appearance of a human, whether that of a man or of a woman. And, like many of the shapeshifters that we have focused on so far, the Kitsune alternates from being a malevolent creature to a placid and helpful entity. Mostly, however, it acts as a classic Trickster – manipulating people, and playing endless mind-games. I'll leave the last words to The Encyclopedia of the Great Plains. They say: "Ultimately, the trickster is disturbing, not because of his difference but because of his lack of difference. As purely a cultural construct, the trickster's body is a cultural body–our body. He is always a part of us, and he exists only to be interpreted. And when we interpret trickster, we interpret ourselves. Even though we often attempt to alienate ourselves from the trickster–by making his body grotesque, indistinguishable–wherever we are, there is trickster, laughing at what we've become."

Anomalous Precipitation: A Closer Look at Cases of Odd Fortean Falls, Part One