The Bizarre Case of the Teleporting Nun

Of all of the supposed powers of the mind and alleged displays of strange abilities, ranking high amongst these are those cases that seem to actually involve teleportation. Although rare, such cases do crop up from time to time, and they rank among the oddest of the odd. These tales tell us of people jumping vast distances in the blink of an eye, and while it may seem to be firmly planted in the realm of science fiction, there are actually accounts of this happening throughout history. One of these was a humble nun, who resided at a convent in Spain and seemed to be able to freely shift back and forth across the vast ocean to visit the New World instantaneously.

Mary of Jesus of Ágreda was born in 1602 in Ágreda, a town located in the Province of Soriaunder, Spain, under the name of María Coronel y de Arana. From a very early age she had been raised to be a devoutly religious, in part because her family, who were nobles, had close ties with the Franciscan friars of the Friary of San Julián, just outside of town. When she was just a child she began to display some rather strange behavior and abilities. Not only was she exceptionally mature and rational for such a young age, as well as exhibiting a remarkable selfless compassion for others for her age, but her mother claimed that she had certain gifts, hearing voices and speaking to invisible friends, and having intense visions in which she believed that God was instructing her about the sinfulness of the world. In addition to this, she showed a great interest in spirituality and spiritual acumen, and all of this likely contributed to her at the tender age of 12 deciding to join the Discalced Carmelite nuns in Tarazona.

She diligently made these preparations, but a potent vision experienced by her mother changed things, during which she was commanded with a powerful voice to end her family’s nobility and give themselves over to the church, giving their possessions to the poor and turning their castle into a convent for the Franciscan Order of the Poor Clares, to be called the Franciscan Convent of the Immaculate Conception at Ágreda. The family truly believed this to be a message from God, and since it was so compelling they felt they had no other choice but to obey. Due to this sudden change of fortune, María decided to stay there and join the convent that her own home was to become, becoming Mary of Jesus of Ágreda and agreeing to remain within the convent’s walls for the rest of her days living a pious and chaste life of poverty and prayer. During this time, her visions and hearing voices from God would continue, and it was in 1620 that her life would take a turn for the truly strange.

It happened one day as she was knelt down in prayer at the chapel, something which she spent much of her day doing, and which was not particularly unusual in and of itself, but this day was different. At one point, her face grew pale and she fell unconscious. Although she had thought she had been alone, there was actually a beggar nearby who had seen this, and this beggar would later claim that after Mary had slumped over she had been enveloped in a bright blue life and had then hovered several feet over the ground. After this mystical experience, her mysterious visions would become more intense, and she would reportedly go into frequent trances for up to several hours a day. When asked about what she had seen during these trances, Mary of Jesus claimed that she had been spirited away by angels and God to a faraway land of “bronze-skinned people” with primitive weapons and who used torches for light. She had been told by God that these people were called the Jumano Indians of New Spain, in what is today Texas and New Mexico, and that she was tasked with spreading His word amongst them to convert them. She claimed that during these visions, she was being actually transported to the New World and was actually interacting with the Indians, which raised some eyebrows because not only because was this an ocean away, but she had not left the convent and was witnessed to be there in her room during these trances. Nevertheless, she gave incredibly detailed reports of what she saw and experienced during these mysterious excursions.

Over the coming decade, she would claim to make more than 500 of these spiritual visits to the Indians, sometimes two or three a day. At first these claims were met with skepticism by the Catholic Church, which called her delusional, but missionaries in the New World, as well as the Indians themselves, gave testimony that seemed to substantiate the fantastical claims. For instance, in 1622, a New World missionary named Father Alonzo de Benavides wrote a letter to both Pope Urban VIII and Philip IV of Spain claiming that someone had already been actively converting the Jumano Indians since before he had even arrived. When the Indians were asked where they had learned about Christianity they claimed that it had been shown to them by a European “lady in blue,” who could also allegedly heal the sick and float through the air. This mysterious woman had also apparently given them crucifixes and a chalice that also appeared to have come from Mary’s convent. The Jumano were even shown a small painting of Mother Luisa of Carrion, another convent of Poor Clares, and the Indians insisted that the Lady in Blue had been wearing the same thing but had been much younger. It looked very much as if this mysterious woman in blue was Mary of Jesus just as she claimed.

Not only that, it would turn out that the countless details that Mary of Jesus had given on the Jumanos' appearance and way of life were completely accurate. How could she have known any of this? At the time, Benavides knew nothing of the claims that Mary could allegedly teleport back and forth over the ocean, and he would not hear these stories until he returned to Spain. So fascinated was he by the accounts that he personally interviewed Mary and supposedly found her to be quite sincere, as well as demonstrating an intimate, detailed knowledge of the Jumano Indians, their language, and the geography of the areas where they lived far beyond what she could have possibly studied through books alone.

In the meantime, Mary was continuing these spiritual journeys and being witnessed by not just the Indians, but also by other missionaries and explorers. Interestingly, the journals kept by these various witnesses would sync up very closely to the times when Mary was supposedly going into her trances, and sometimes it seems as if she may have been actually physically teleporting there because there were claims from other nuns at the convent that Mary would sometimes vanish from her quarters and be nowhere to be found, and that it was during these absences that she was described as being “off with the Indians.” There were even accounts by other disparate tribes vast distances away that gave reports of a similar mysterious European woman, and which were nearly identical despite these tribes sometimes being thousands of miles apart.

The stories of Mary of Jesus and her amazing mystical journeys to the New World were soon making the rounds all over Spain, inciting much discussion and debate, as well as attracting the attention of the Spanish Inquisition. Although she was investigated by the Inquisition for possibly charges of heresy, she was never prosecuted, likely because she had long had a correspondence with the Spanish King Philip IV, for whom she would eventually become a spiritual and political advisor. Mary’s trips to the New World would end in 1631, and she would continue her duties as the abbess of her convent until her death in May of 1665, going on to be posthumously declared “Venerable” by Pope Clement X, in honor of her "heroic life of virtue,” marking her path towards beautification. This was further pushed forward when her casket was opened in 1909 to take a medical record, but when the casket was opened again in 1989 it had not allegedly not deteriorated at all, signifying that it was an “Incorruptible body,” or a corpse that defies rot and decay because of the spiritual power of the dead. 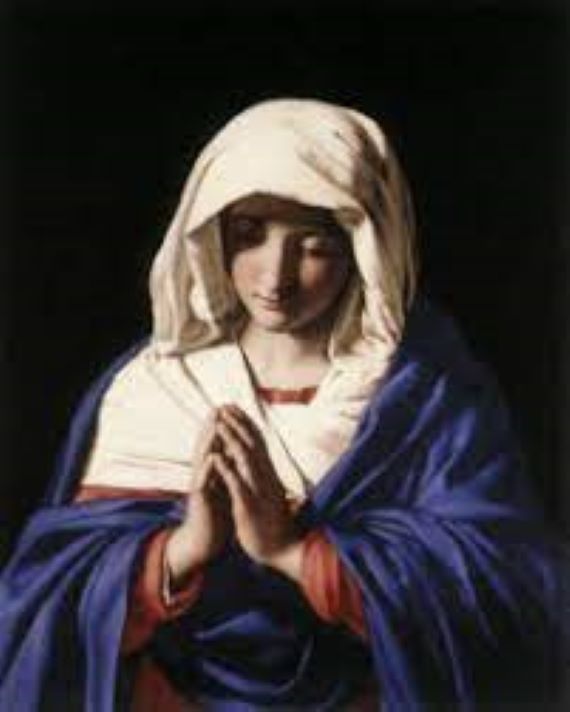 Interestingly, although Mary of Jesus died in 1665, she seems to have begun her bizarre expeditions to the New World even in death. The Indians of the regions where she had visited were telling stories of still seeing her well into the 1680's, with these sightings investigated by the Spanish and helping to establish their presence in what is now Texas, spurring on colonization of the region in the process. Some of the reports were fairly spectacular, with one such report by the Indians related to the Jesuit missionaries Fray Eusebio Kino and Fray Juan Matheo Manje saying:

A beautiful white woman carrying a cross came to their lands. She was dressed in white, gray, and blue... She spoke to them, shouted, and harangued them... The tribes of the Río Colorado shot her with arrows and twice left her for dead. But coming to life, she left by air.

In modern times, the body of Mary lies at a small, nondescript crypt at the very same convent she belonged to in Ágreda, and any truth to all of the stories is murky. There seems to be a lot of historical evidence to prove that something anomalous was going on, but just what are we looking at here? One area of speculation is that she had actually managed to propel herself vast distances across the sea, perhaps using teleportation or a phenomenon known as "bilocation," in which a person allegedly appears in two places at once, which would explain why her body was seen in the trance in her room even as she was out among the Native populations of the New World. Is that what was going on here? Some mysterious power we can scarcely comprehend? Or is this just legends, myth, and misunderstandings that we have yet to unravel into something that makes sense? Whatever the case may be, the case of Mary of Jesus of Ágreda remains a curious historical account that still inspires wonder and debate.

A President Killed for What He Knew About UFOs? Or Complete Nonsense?