The Buckwheat Beast: A Curious Legend of a Chinese “Monster”

Tales of the Yeren, a purported Asian counterpart to America’s Sasquatch, have long proliferated throughout parts of the remote mountains of China. For several centuries, folk traditions from around the Hubei province have told of manlike beasts said to haunt the rugged forests and stony cliffs. Sightings of the creatures—in the few instances where they are seen at all—mostly occur at night, though more often the creatures announce their presence at a distance by issuing loud, shrill whistles.

Another of the regions in China where such stories have been collected is around Changshan County, where a very curious story was recorded in the 18th century by the Qing Dynasty writer Pu Songling (1640-1715), as recounted in his classic collection of stories entitled Strange Tales from a Chinese Studio.

The story in question occurred in the Autumn one year, when an elderly Changshan County farmer named An had been out cutting his buckwheat. Around this time, many of the man’s neighbors had complained of a thief that had been stealing from crops in the nearby villages, and so the man and his men decided to load their buckwheat into carts that evening and remove it from the fields, rather than letting it remain there overnight.

As they finished their work for the day, the farmer remained behind as his men carted away their produce, deciding to keep watch over the remaining crop throughout the evening. Positioned in the center of his field with a spear nearby, just as sleep began to overtake him the man heard what sounded like footsteps nearby, crunching the buckwheat stalks.

Suspecting the neighborhood thief had arrived, the man looked up to see “a huge monster bearing down on him, more than ten feet tall, with red hair and a big bushy beard.” Startled by the creature’s appearance, the man struck it with his spear, causing it to flee into the night, howling as it went.

An ran back in the direction his men had gone, spear in hand, and met them on the road where they traveled. Although he shared the details of his strange encounter, the men were skeptical about what the old man had seen, supposing he might have drifted off and merely dreamed that this had all occurred.

The following day, as the men went back to work in the buckwheat fields, they were startled by a strange animal call, one which An clearly recognized from the night before. 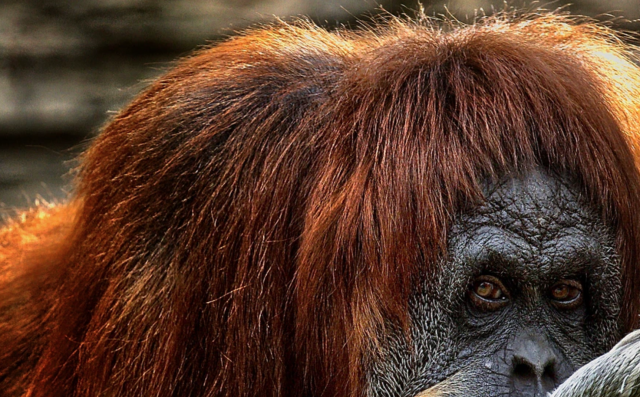 “It’s the monster again!” he cried, and at the sight of the beast, he and the others fled back up the road. Having been convinced of the creature’s existence, An had his men join him that night in the field, armed with bows and arrows, and early the following morning when the creature made its next appearance, they fired their weapons at it and drove it away. The strange, red-haired beast was not seen again for several more days.

After about three days, An and his men were working at his granary when from the top of a tall straw rick, the old man saw the creature approaching, quickly closing the distance between them. He alerted his men, but before they could arm themselves with their bows, the beast had sped toward the rick and attacked An, knocking him backward and biting his head.

“The men climbed up and saw that a whole chunk of the old man’s forehead, a piece the size of a man’s palm, had been bitten off, bone and all,” Songling’s account reads. The old farmer, already unconscious, died shortly after the attack.

“The monster was never seen again,” Songling’s account concluded, adding that “Nobody could even agree on what sort of creature it was.”

Tales throughout parts of China have long told of sightings involving large, hairy primates in various regions, particularly around Shennongjia. Traditionally known as Yeren (meaning “wild man”), many accounts of these creatures describe their hair as having a reddish coloration, with the creatures essentially matching descriptions in terms of size and behavior to that of the North American Sasquatch or Bigfoot.

Of course, it is worth noting that Songling’s writings covered a wide variety of different monstrous beings, ranging from ghosts and vampires, to tales of magic and other supernatural themes. Is it possible that the beast told of in the account of the farmer who was attacked at his granary is anything more than just a legend?