Has the Earth undergone periods of violent change throughout its long history? If so, what had been the result of these changes and, of equal significance, what instigated them in the first place?

Many ancient texts appear to describe great cataclysms that have affected our planet in various ways, although debate remains as to whether all of them describe real phenomena or are in some cases just myths and allegories conjured from the minds of ancient commentators.

Arguably, the most famous of all these is Plato’s account of the destruction of the fabled Atlantis. While modern scholars generally accept that Plato’s dialogues recounting tales of Atlantis had been aimed at having an instructive purpose, even some of Plato’s early followers were said to have considered the story to have historical roots. Chief among these had been Crantor, a Greek philosopher of the Old Academy and one of the earliest scholars to write commentaries on Plato’s works.

Modern science holds a different view on the matter, however. To date, there has been little evidence come to light that supports the existence of a literal island continent that sank into the Atlantic some 9000 years or so before Plato’s time. However, this is not to say that there weren’t incredible changes that the Earth underwent during this period which, although they may be coincidental, certainly have caused some academics to wonder about narratives like the ones Plato offered.

Around 12,700 years ago, as Earth was transitioning from the last major ice age into the modern era (or Holocene) several changes were underway, for which there is an abundance of modern geological evidence. As the glacial formations around the polar regions began to melt and the ice sheets that extended over parts of North America and Eurasia began to slowly thaw, meltwater runoff gradually flowed into the Atlantic Ocean, disrupting the circulation of ocean currents and causing temperature changes lasting for hundreds of years.

Some modern evidence—primarily in the form of concentrations of rare-earth elements in geological strata coinciding with this period—points to even more potentially catastrophic phenomena that might have occurred, having possibly instigated some of the other changes Earth underwent around this time. One emergent theory that had once been ridiculed, but in recent years had increasingly gained support among scientists involves a possible impact event that occurred as Earth exited the Pleistocene, which triggered a period of cold reversal known as the Younger Dryas.

Many modern catastrophists point to this not only as possible evidence of a cataclysmic period in the late Pleistocene but also note the similarity in its timing and the period during which Plato said Atlantis sank beneath Atlantic waters. If nothing else, it might be possible that legends that range from Atlantis to the idea of a “great flood” prevalent in mythologies from all over the world could have been born from what were once actual memories of such events in Earth’s past.

Over time, catastrophism has seen sympathy from a range of scholars. These include the Harvard-trained professor and one-time member of the Office of Strategic Services Charles Hapgood, who went on to become a proponent of rapid pole shifts, as well as a champion of the idea that the famous Piri Reis map detailed not merely the coastline of the Americas, but perhaps Antarctica too. Most of Hapgood’s theories, while entertaining (and perhaps not all of them entirely without merit) have nonetheless failed to withstand scientific scrutiny over the ensuing decades.

Nonetheless, others have appeared to champion the catastrophist cause. A 1978 paper by P. Warlow titled “Geomagnetic Reversals?” in the Journal of Physics A: Mathematical and General, Volume 11, Number 10, revealed a comparatively fresh take on the matter (at least when compared with earlier theories proposed by the likes of Hapgood).

“The enigma of geomagnetic reversals and their apparent link with other phenomena,” Warlow wrote, “such as faunal extinctions, is shown to be explicable by treating these reversals as a relative rather than an absolute effect.” Rather than to suppose that mere magnetic reversals occur, Warlow posited the idea that an actual shift of the Earth’s rotation might periodically take place. Such an idea, he believed, “is sufficient to account for the behaviour of the field in detail during a reversal, and for explaining the links with the various other phenomena.”

Warlow cited information “not only from modern geological and related investigations, but also from astronomy and from ancient sources.” Among the sources he examined had been peculiar accounts from ancient Egypt that appear to describe the sun rising in the West, rather than in the East, a mystery which has been revisited more recently by author Scott Creighton in books like The Great Pyramid Void Enigma. 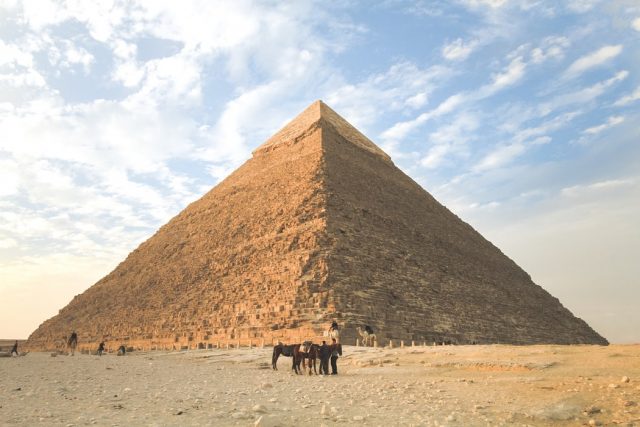 Of course, geomagnetic reversals certainly have occurred in the past and are widely recognized phenomena, although ideas about the range of effects they may cause remain varied. Geologists have long understood that changes in Earth’s magnetic field resulting in the reversal of the positions of magnetic north and south occur periodically throughout time, leading to alternating periods (known as chrons) where these polarity reversals occur.

As far as what leads to these changes, there are no definite patterns. While geomagnetic reversals appear to occur randomly, a total of 183 have occurred within the last 83 million years, meaning that on average such reversals occur once every 450,000 years or so. Some geomagnetic shifts appear to be far less widespread, which geologists call excursions. One interpretation is that these excursions could be the result of incomplete or failed geomagnetic shifts. Another possibility is that these shifts are instigated by cataclysmic events, and at least some data appears to correlate geomagnetic phenomena with periods like the Younger Dryas.

Will there be another geomagnetic reversal any time soon? Since the last one occurred around 780,000 years ago, some have noted that we appear to be overdue for the next one, which could occur at almost any time given our limited understanding of the mechanisms that might facilitate such changes. However, one thing that remains clear is that they do occur… and gaining a more complete understanding of why and how could be beneficial both in terms of understanding past changes our planet has undergone, as well as those which may await us in the future.