The Cursed Fishing Boat of Massachusetts

Some places just seem to be steeped in strange mysteries and weird lore. The idyllic seaside city of Gloucester, Massachusetts, located in a protected harbor of Cape Ann and part of Massachusetts's North Shore, has a long history of being a fishing port, situated on rich fishing grounds near the Georges Bank and other thriving fishing spots off Newfoundland and Nova Scotia, and indeed it is often called America’s oldest fishing community. For hundreds of years fishermen have toiled away in the picturesque scenery to make it the center of a thriving fishing industry, passing along their trade from generation to generation right up to the present. It was always a dangerous profession in these stormy waters, with the Fisherman's Memorial standing as a reminder of the thousands who lost their lives at sea harvesting the ocean, but they always kept at it to forge the city into what it is today. Considering the deep roots of the city in the ways of sailors and the sea and how they perceived and reacted to its dangers, many traditions and superstitions that are intertwined with the life of fishermen and sailors have found themselves inextricably woven into the lore of the area, and one of these is the tale of a cursed fishing vessel that gained great infamy in its day.

In 1869, a 65-ton cod fishing vessel called the Charles Haskell began its life at the Cape Ann, Massachusetts shipyards. It was a handsome vessel owned by one Samuel Haskell, but before it even had a chance to shine it had dark clouds hanging over it. It began before the ship even left dry dock, when it was reported that a workman had a freak accident, slipping to fall and break his neck and die during a final inspection. At the time this was considered a very bad omen, and before long there were whispers that the Charles Haskell was cursed before it had even set out to sea. The people of the area were extremely superstitious about such things, and as such there could not be found anyone willing to man the newly minted ship, with everyone scared that dark forces were swirling around it, to the point that the original owner washed his hands of it. 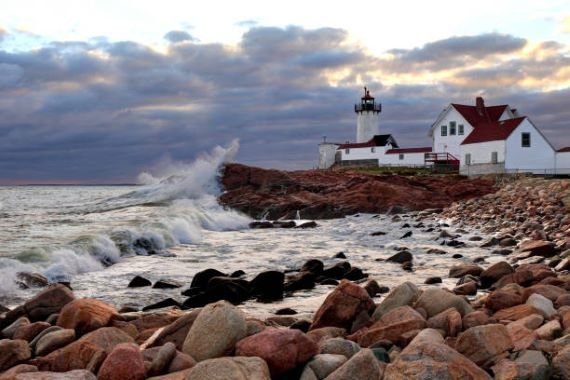 The supposedly cursed fishing boat then sat abandoned for some time, and eventually another buyer purchased the vessel, who actually found someone willing to test their luck on it, a Captain called Curtis. He was somehow able to find a crew of either brave or crazy sailors to join him, and he set off on the ship’s maiden voyage on March 6, 1869. Yet, although the ship left in favorable conditions, the infamously unpredictable weather of the area soon acted up, and before long there was a storm brewing. Now, considering that it was the Charles Haskell that was supposedly the cursed one, it would actually turn out that the vessel would be a curse for others, in particular another fishing ship, a massive 937-ton rig called the Andrew Jackson. A report of the odd incident would read:

The details of a particular experience were given me by one of the crew of the schooner “Charles Haskell” which had a very narrow escape while on the fishing grounds. In company with several other vessels, this craft was caught in a sudden gale of great fury, in the midst of which she began to “drag”, a menace to those vessels anchored about her. Seeing their danger and having given up hope of their anchor holding, they finally got some sail on the craft, cutting their cable, and thus endeavored to work clear of the fleet about them. The snow was falling in great clouds and the wind was blowing with terrific fury, as borne on the wings of the gale, they dashed on through the night. Now the form, of a vessel would appear in the blinding snow ahead and be gone in a moment; now a craft went drifting by, or perhaps having “cut”, was seeking safety like themselves. Then a light was seen in the darkness ahead, the form of a vessel appeared, the outline of a schooner under sail, even as they were. With all the fury of the gale driving them on, with terrific impact they struck the unknown schooner amidships; there was a sound of rending plank, a fleeting glimpse of men upon her deck running aft, sharp outcries heard even above the roar of the wind and sea, and the Haskell, bowsprit gone, drifted clear, while the other no doubt sank beneath the waves, every man of her ‘crew going to a watery grave.

The Andrew Jackson and its entire crew was lost, but somehow the Charles Haskell had made it out in one piece, limping back to port for repairs. It was considered an extreme stroke of luck, as considering the size disparity between the two it was practically a miracle that the Charles Haskell had survived. Indeed, there had apparently never been such a collision in that area in which one of the vessels survived, with one report reading, “This is the only instance known where two vessels have collided on Georges and one has escaped foundering.” 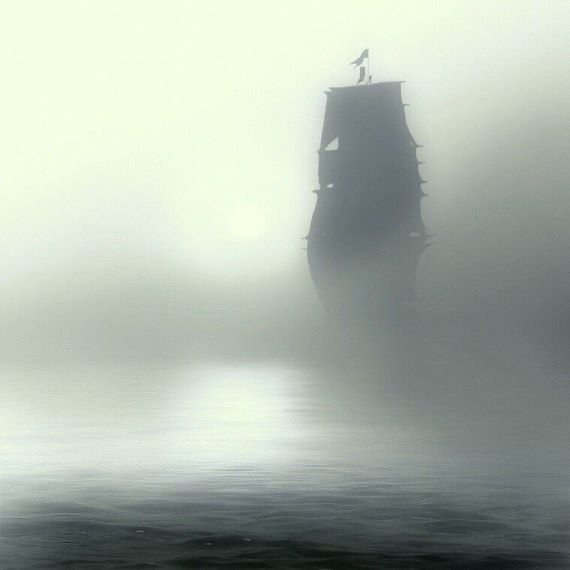 Although it was good news that the crew of the Charles Haskell had been spared, this unfortunate fact only furthered the whispered rumors that it was a cursed vessel. Nevertheless, the Charles Haskell underwent repairs and set out yet again, undeterred by the talk of curses, and this was where things would get weird. At first, they had great fishing, pulling in haul after haul, but then on the 6th evening, a ghostly phantom ship allegedly approached them, which appeared to be a spectral version of the doomed Andrew Jackson. From the ghost ship sprung spectral crewmembers with eyes that were  “nothing but empty, black sockets,” who apparently climbed up onto the decks of the Charles Haskell one by one to spread out and go about the motions of fishing, feverishly working their ghostly lines and ignoring the startled living crew around them. After some time of this, the phantom crew climbed over board again to disappear into the waves, with some later versions of the account describing the heads of these dead sailors bobbing about in the froth below. This ghostly crew would appear on several more occasions, and the terrified Captain Curtis and his crew finally abandoned the vessel to leave it once more alone in the harbor. Subsequent crews would also report encountering the ghostly crew, until the Charles Haskell was renowned for being haunted. Then one day the ship sailed off to never return, its fate unknown. One of the last surviving members of the 1869 crew of the Charles Haskell would later tell this tale in a report that read:

Winters was the last survivor of the crew of the Gloucester schooner, Charles Haskell, which in a storm in March 1869, ran down and sank a Salem schooner and its entire crew on Georges fishing banks.  He died at the Fisherman’s Snug Harbor in his eighty-second year, repeating almost to the last the tale of the ghost ship supposed to have pursued the Haskell throughout its career as a fisherman. Once off Eastern point, at the entrance of Gloucester harbor, Winters said, a schooner ran down the wind, hove alongside the Haskell, and its phantom crew climbed the rigging, declaring themselves the ghosts of the Salem fisherman. Winters and others of the Haskell’s crew refused to fish in the ship again and a new crew was taken on. These returned with a similar story of ghostly visitations at sea, took their dunnage bags and quit. Another and still a fourth crew were shipped, but each came to port with a renewal of the story of a ship shrouded in white and a specter crew, and the Haskell was hauled up, unable to get men. It finished its seagoing as a sand freighter and the Salem ship was not heard from again.

Is there anything to this tale, or is this just superstition and legend? The vessel Charles Haskell really did exist and really did have a rocky start, so we are left to wonder whether it was the victim of a curse or just bad luck and some sensationalist press. We will probably never know just what was going on here, but whatever it is, it is a perplexing historical oddity and mystery that still echoes through the region today.