The Hairy Giants of Hubei: How Reports of a Red-Haired “Monster” Once Launched a Chinese Scientific Expedition

Since the early decades of the 20th century, reports of large, hirsute humanoids have been widely recognized in Canada and the United States. Best known by names such as Sasquatch, the anglicized name given them by Irish-Canadian J.W. Burns in 1929, and Bigfoot in the United States since 1958, these North American representations of the ubiquitous “wild man” also have counterparts in other parts of the world.

China’s Hubei province has long been regarded as a possible home for some variety of humanlike creatures equivalent to the North American Sasquatch, with legends and folktales dating back to at least as far as the Warring States Period which appear to recount such observations.

Such traditions hold that areas in parts of the mountainous region of Shennongjia, caves exist where the Yeren is purported to have existed in times past, if not still today. Acknowledging this tradition, one famous cave that remains a cultural landmark in this region bears this name for the creature above its entrance, emblazoned on the stone in bright red paint as a reminder of the long-held beliefs about wild people said to inhabit the mountains.

However, the stories about China’s Yeren are not relegated to past eras and traditional beliefs. Sightings of the creatures have also occurred in recent decades, which included a flurry of reports around Hubei province in 1976 that even saw attention from the venerable New York Times.

The series of incidents began in 1976 with sightings of a hairy creature in Shennongjia around the border between Hubei, Shaanxi, and Sichuan. Described as being covered in reddish, wavy hair, the stories proliferated to the point that the Chinese Academy of Sciences organized an expedition in March 1977, sending 110 biologists, zoologists, and photographers in pursuit of the creature. They were provided backup too; soldiers accompanied the team of scientists, armed with tranquilizers, rifles, and dogs to lend support in the search for Hubei’s mysterious red-haired monster.

Theories about the creature ranged from it being some undiscovered large primate, to being a possible descendant of Meganthropus, a Pleistocene hominid ape recognized from little more than jaw and skull fragments recovered an archaeological site in Central Java, Indonesia. Teeth were also recovered at the time of the discovery of these remains.

It was a thrilling prospect, especially on account of the descriptions of the animal. One of the earliest notable sightings from this period involved a group of county officials who were traveling together in a jeep along a back road at approximately 1 AM local time when their journey was halted by the presence of an object in the road ahead of them. Described as a “large animal with reddish hair,” the creature appeared to be laying in the road asleep, and the officials were able to approach to within six feet of the sleeping animal.

Unsure of whether it was injured or not, one of the men elected to toss a stone at the animal’s buttocks, and upon startling the creature from its slumber, it rose slowly and stumbled off into the forest and out of view. 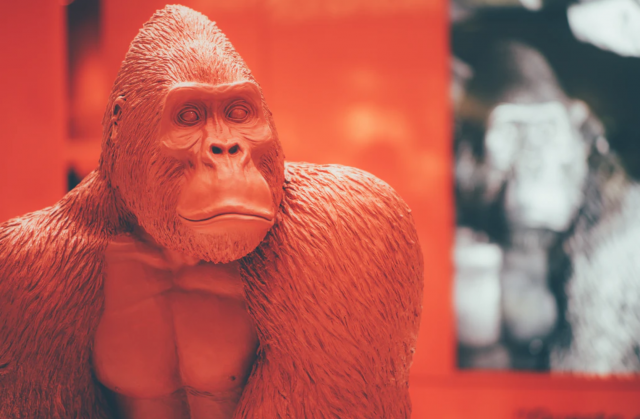 The officials had been so startled—and amazed—by what they had seen that they sped back to their station at the county seat, and immediately sent an telegram to the Academy of Sciences in Peking, an incident which became the catalyst for the organization’s eventual investigation into the creature’s presence in the region. In fact, a team of scientists was immediately dispatched to the area where the nighttime encounter had taken place, but by this time there was no sign of the creature, although footprints and even droppings believed to have belonged to the creature were located near the vicinity. This, in addition to hair samples found on tree bark nearby that appeared to suggest the presence of a primate, but what kind?

One thing researchers with the Academy of Sciences could discern was that the creature was fairly large, with many of the footprints it purportedly left behind measuring from anywhere between 12 and 16 inches. Eyewitness testimony was also collected from locals in the area who had claimed to see it, which included one resident who said she observed the animal fleeing while carrying a small pig under one arm. Based on descriptions of the creature, it was believed to be approximately 6 feet, six inches tall. Some descriptions also noted that along with the red hair covering its body, the creature also possessed long hair on its head, which fell to just above the waist.

Although the search for this possible “living fossil” had been unsuccessful, it nonetheless marks one of the largest official expeditions mounted to go in search of a Sasquatch-like creature anywhere in the world in recent decades. Indeed, if the reports from around that time are to be believed, perhaps some relict population of large manlike creatures could still thrive in remote Shennongjia even in the present day.