The Haunting of the Haw Branch Plantation

The historic plantation house known as Haw Branch lies out in Amelia County, about 35 miles south of Richmond, Virginia, and back in its day it was quite a grand place. Built in 1745 and named after the hawthorn trees growing along a stream that meanders through the property, the stately Georgian-Federal style house was erected upon a sprawling parcel of 15,000 acres by one Colonel Thomas Tabb and his wife Rebecca, and from there it would be expanded over the years and gather quite the colorful history. During the Revolutionary War it housed soldiers, during the Civil War its lead roof was used to melt down to make bullets for the Confederate soldiers, and over the years the plantation passed through several owners, steadily expanding to include a smokehouse, a schoolhouse, a weaving room, a moat, massive chimneys, gardens, and numerous outbuildings, as well as two cemeteries, before finally being abandoned to slowly devolve into a feral, weed-choked state, slowly deteriorating and being reclaimed by the land and become a beacon of creepy stories. It would not be until 1965 that it would be resurrected from its doom, and this is where its many mysteries began to be known. Thus would begin a strange odyssey of hauntings and bizarre phenomena that have not seen any clear answer.

When William Cary McConnaughey and his wife Gibson first saw the property in 1964, it was little more than dilapidated ruins poking out of the brush. Haw Branch was at the time a shadow of its former self, nothing but a husk of crumbling walls, sagging floors, and coughing up weeds, but Gibson had a special interest in this property because she was a direct descendant of Colonel Tabb, and her grandmother, Harriet Mason Jefferson, had once lived there. She had indeed visited often when she was a girl, and remembered it as it once had been in its prime, an opulent estate with Federal-style interiors and ornate furnishings. Seeing the once proud estate reduced to nothing more than a dead skeleton saddened her, and so she had come here with the intent of purchasing it and fully renovating it with her husband. 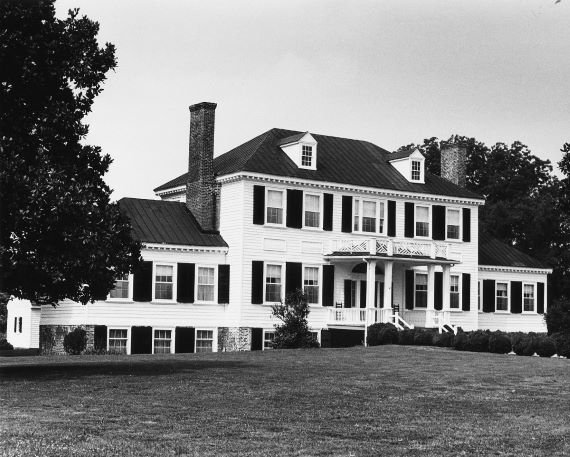 The McConougheys had a monumental task ahead of them, but slowly they started to breathe life into the old, decayed building, and little by little some of its former glory began to shine through the dust-encrusted façade. It was as this renovation was going on that they would have the first of many strange paranormal encounters, when one evening in November of 1965 they were awakened in the middle of the night by a loud, bloodcurdling scream that reverberated throughout the entire house. When they investigated, they found that the ominous screaming seemed to be coming from up in the attic, but when they went up there expecting to find someone in trouble, there was no one there and no explanation at all for where the screaming had come from. This anomalous screaming would become a regular feature of the house, exploding out from the attic every 6 months, always on the 23rd of November or May, like clockwork, but this was not the only weird phenomenon that they would have by a long shot.

After these initial screams from the attic, all manner of strange things began going on around the house. The McConougheys would hear the sounds of footstep, heavy thuds as if something was falling, scratching noises in the walls, and the sound of something heavy being dragged around in the attic, although when they looked up there they would find everything undisturbed and as dust-frosted as ever. The basement was also a wellspring of weirdness, with whispering heard down in the gloom and dark, loud bangs, and a section of wall that seemed different than the rest, and which their cat and dog would stare at intently as if mesmerized. They would also sometimes smell what they took to be rose perfume throughout the house, which would waft through only to vanish as quickly as it had materialized, and then there were the apparitions.

The first time they encountered one of the house’s phantoms was when Gibson was awoken one night by her dog whining out in the drawing room. When she got up to see what was going on, she claims that she saw there standing in front of the fireplace “a luminous figure” of a woman wearing a flowing white gown, and with dark hair and eyes. The lady in white allegedly smiled at her before vanishing. After this, the enigmatic Lady in White would occasionally be glimpsed walking through the halls and disappearing through walls, often leaving the small of rose or orange-scented perfume in her wake. Other apparitions would make themselves known as well, including a skinny shadow figure with a limp, and old man with a lantern who would hang around the barn, and a bird-like creature with a 6-foot wingspan lurking in the yard. However, perhaps the strangest phenomena of all orbit a supposedly haunted portrait on the property. 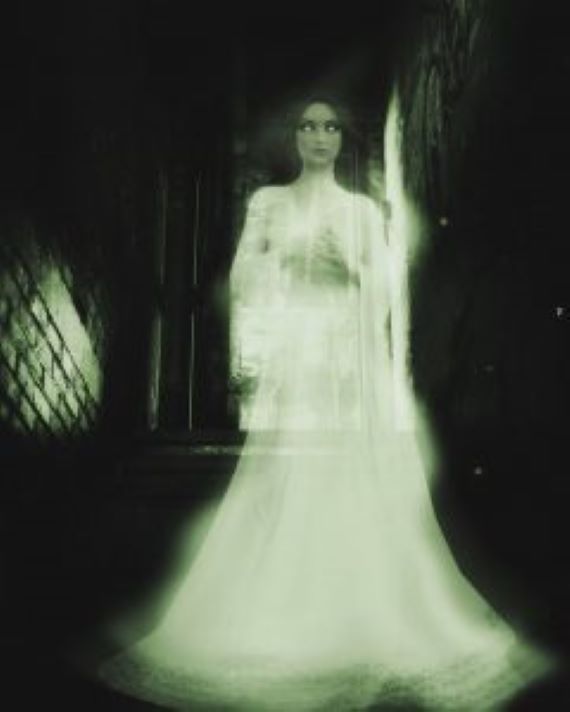 In 1969, a cousin of the McConougheys gave them a pastel portrait of a young woman named Florence Wright, who was a distant relative who had apparently passed away before the portrait was finished. It was kind of a creepy gift, but they nevertheless put it up in a gilded frame in the library over the fireplace. After a few months, one day they were in the library and noticed that the painting looked different, and when it was inspected, they found that the woman in the portrait now had lighter hair and her cheeks were flushed, as if blushing. After this, people would regularly claim that the eyes followed them around the room, and one day the painting was found to be a black and white charcoal color rather than pastel for no discernible reason. It then gradually changed again until it was even more colorful and vibrant than before. The phenomenon was so surprising that the McConougheys had it looked at by art specialists, but there was no reason found for why it should have changed colors.

Other phenomena hovered around the portrait as well, such as a disembodied woman’s voice whispering, and desperate for answers a psychic was brought in, who came to the conclusion that the spirit of the woman in the portrait was somehow attached to it, possibly because she had died before its completion. The psychic explained that the ghost could change the colors of the painting according to her mood, and so while she had been sad at first, hence the charcoal grey, she had come to like Haw Branch, and so the colors had returned. One day, the portrait mysteriously fell off the wall to crash to the floor and smash the frame. After which a note was found in the back explaining that Florence had died from a stroke while playing the piano at the age of 24. Even eerier, the signature of the artist was found, a J. Wells Champney, and it would turn out that he himself had met a terrible demise when he had fallen from an elevator shaft in New York City.

The site went on to be added to the National Register of Historic Places in 1973 and has become a recurring feature upon the world of paranormal investigations, but there are few answers as to what is going on here. The identity of the Lady in White has never been determined, nor has the possible identities of the other apparitions shambling about here. To this day they apparently remain, and one wonders just what is going on and why they might be tethered to this place. Whatever the answers may be, Haw Branch is certainly a creepy place with more than its fair share of spooky going on.

Philip Corso and the Roswell UFO Crash: Why He Lied About the Real, Terrible Truth – Part 2