The Mysterious Vanishing of the SS Waratah

Throughout our history of pushing out past the horizons of the oceans of our world, the seas have very often seemed to be, in a sense, hungry. There is no shortage of accounts of vessels sailing off the face of the earth to never be seen again, lost to time and the realm of the unknown. Such cases have persisted right up into modern times, with the sea swallowing up whole ships and their passengers and crews to leave little trace of where they have gone, and these remain some of the most perplexing mysteries of the deep. One such infamous case is that of a massive, supposedly unsinkable ship that one day sailed off past the horizon and into the unknown, to leave behind many mysteries and questions that have never been solved.

Back in its day, the SS Waratah was a marvel of ship design and a technological wonder. Built in 1908 for the Blue Anchor Line in order to make trips between Europe and Australia, it was a colossal 9,339-ton, 500-foot long behemoth, decked out with the most cutting edge technology available, including a distillery capable of producing 5,500 gallons of fresh water per day and an innovative hull design made up of eight watertight compartments that made it widely regarded as unsinkable. At the time of its launch, the SS Waratah was considered the epitome of luxury and speed, able to carry nearly a thousand passengers and maintain a mean speed of 15 knots (17 mph; 28 km/h), which was very fast for a vessel its size. In addition to its opulent facilities for passengers, the SS Waratah was also designed to pull double duty as a cargo vessel, and could hold 15,000 tons of cargo such as coal, frozen meat, dairy products, wool and metal ore, while still achieving a speed of 13 knots, and these cargo holds could be converted into large dormitories capable of holding almost 700 steerage passengers. Under the leadership of a Captain Joshua Edward Ilbery, the Line’s most experienced officer, the SS Waratah was considered to be an unsinkable giant that could do no wrong, but on only its second voyage it would sail off into the annals of unexplained mysteries at sea.

On 27 April 1909, the SS Waratah set out on her second trip to Australia carrying 22 cabin passengers, 193 steerage passengers, a crew of 119, and a large cargo of general merchandise en route to Adelaide, Australia. The vessel made the routine trip with no issues, stopping off at Cape Town, South Africa, before arriving at its destination on June 6, loading up on a cargo of lead ore, and then moving on to Melbourne and then Sydney, where it took on a huge cargo of bullion, wool, frozen meat, dairy and flour. On June 26, the SS Waratah departed Sydney on its way to Durban, South Africa, from where it was to continue on the Cape Colony port of Cape Town, then on to Europe. The vessel made it to Durban without issue, and then departed there on July 25 with 211 passengers and crew aboard. The SS Waratah was sighted by the Clan Line steamer Clan MacIntyre, and as the faster Waratah passed them the two ships communicated by signal lamp simple greetings and information. At this point there was no sign of distress or anything amiss at all, no indication of a problem, and so when the SS Waratah passed them and headed out of sight no one aboard the Clan MacIntyre thought anything of it. However, the SS Waratah was about to go sailing off the face of the earth.

The SS Waratah failed to arrive at Cape Town on schedule, and as the days passed with no sign of the ship there still wasn’t much alarm. After all, the legendary ship was considered to be indestructible, had a seasoned captain, and enough food and water to last 12 months at sea. However, as the days went by it was considered to be unusual, and so a massive search was launched involving a fleet of vessels. In the meantime, there were some rather worrying unconfirmed sightings of the missing ship, such as an unconfirmed sighting  by an Edward Joe Conquer, a Cape Mounted Rifleman who had been performing military exercises on shore on July 28 when he spotted an unidentified steamer that he claimed had been limping along and was then hit by a massive wave that he assumed had sunk the ship. No evidence could be found that this was the case.

The search would ultimately scour 14,000 miles over 88 days of a systematic hunt, but no sign of the missing SS Waratah could be found, not so much as a single scrap of debris, although members aboard of the search vessels, the SS Tottenham claimed to have spotted the body of a little girl bobbing about in the water but were unable to retrieve it. It could not be confirmed if this body was from the missing ship, or even that it was a body at all, since some of the crew members would say that they thought it was just a roll of paper in red wrapping. When passengers who had been on the ship were questioned in an effort to get some kind of answers, they gave varying accounts on the state of the vessel, with some saying that the ship handled well, while others described it as “top heavy,” unstable, and slow to respond to rolls. The testimonies of the witnesses, including experts and crew, couldn't come to a consensus on the seaworthiness of the vessel, with wildly varying estimates on how stable it was, In the end, it was very little to go on, and the search was eventually scaled back, dwindling until authorities were forced to concede that the mighty “unsinkable” SS Waratah had somehow foundered at sea.

In the following years there would be sporadic reports of sightings of the ship, and even reports of finding debris or even bodies from the SS Waratah, but these led nowhere and could not be confirmed. Some reports also sprung up that had not come to light during the initial investigation. One of these came out in 1929, and was a sighting made by the captain and crew of a ship called the Harlow, who claimed to have seen the smoke of a steamer on the horizon about 180 miles from Durban at the time of the disappearance, after which they had observed two bright flashes from the direction of the ship. After this, the mysterious steamer’s running lights had gone out, but the crew could not agree if this was evidence of explosions or was simply brush fires on the shore. In the end, it was not thought of as an emergency, the Harlow continued on, and it hadn’t even been entered into the log. It didn’t help efforts when several hoax articles made the rounds, including one that claimed that the Waratah had been discovered in Antarctica. Still other reports were just plain eerie. A rather spooky account made the rounds from a man named Claude G. Sawyer, who had been a passenger aboard the SS Waratah and claimed a vision he had had at port in Durban before that fateful voyage had saved him. He would say that he had had a series of vivid dreams that were unsettling enough to cause him to disembark at Durban and take another vessel home. In these visions, he saw what he described as:

a man dressed in a very peculiar dress, which I had never seen before, with a long sword in his right hand, which he seemed to be holding between us. In the other hand he had a rag covered with blood.

None of these various reports and details led to the discovery of the missing ship, and it has gone on to become one of the great maritime unsolved mysteries, inspiring much discussion and debate as to just what happened here. How could such a majestic, unstoppable vessel just vanish into thin air without leaving a single trace? There have been many theories, including that it capsized in a catastrophic storm or due to a massive cargo shift that caused it to roll and capsize, that it was sucked into a giant whirlpool, was the victim of an explosion in one of its coal bunkers, or was hit by a freak wave, and in more paranormal circles there is of course talk of portals and UFOs, but there has been no hard evidence of any one of these explanations. 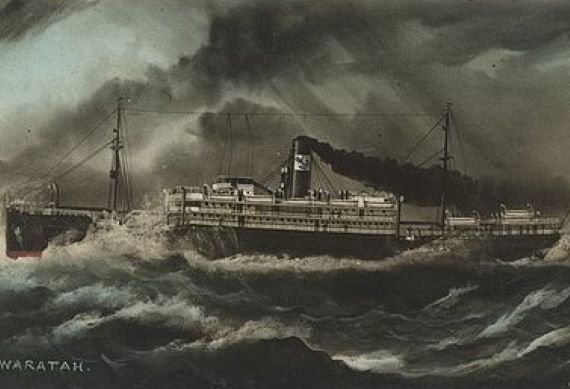 In recent years there have been many expeditions that continue to search for the missing ship, sometimes even turning up evidence or even amazing claims that it had been found, but these have never been proven, and many wrecks that were thought to have been the SS Waratah have proven to be misidentifications. The author and well-known treasure hunter Clive Cussler has made no fewer than nine separate search expeditions along with fellow searcher Emlyn Brown, but all they have managed to find are wrecks that seemed promising at first, but turned out to not be the ship they were looking for. After all of this money and effort has been spent fruitlessly, Brown has lamented, “I've exhausted all the options. I now have no idea where to look.” In the end, the SS Waratah has never been found, no clue as to what happened to it uncovered, and we are forced to wonder. How could such a vast, imposing ship just vanish like that with all of its crew? Where did it go and how does it elude us? There are no real answers, and the case of the SS Waratah remains a great unsolved mystery of the hungry seas.

Taking a Look at the Manipulative “Trickster” Phenomenon – Part 2: The U.K. Bigfoot Phenomenon