My previous article was on the subject of cattle mutilations in the United States - largely in the 1970s - and why they actually had nothing to do with aliens and UFOs. The fact is, though, that many people in the UFO field are absolutely sure the phenomenon is tied to extraterrestrials. As I noted, the entire scenario of tales of alien-driven mutilations was carefully and quietly created to investigate and hide something else: (a) levels of radiation getting into the U.S. food-chain; and (b) the existence of a secret program keeping careful watch on the whole situation. With that said, now let's get to today's article, as it has its connections to the previous one. It's focused on mutilations of another kind. Namely, human mutilations. But, mutilations that - just like with the cattle controversy - were part of an ingenious, grisly, piece of camouflage. And, it all revolved around vampires. To be specific, one particular type of vampire: the ferocious and deadly Aswang. Here's a bit of background on this monstrous thing. Culture Trip say: "According to Philippine folklore, an aswang is an evil, shapeshifting creature that shares the grotesque characteristics of werewolves, vampires and ghouls. It has no consistent image or description because its appearance varies per region. People have often characterised them based on hearsay, which is why the term aswang has commonly been used as a catch-all description for most evil creatures that lurk in the night." Culture Trip add: "What can be agreed on is how they kill. During daylight hours aswangs go incognito, taking on a human form to blend in with regular townspeople – all the while consciously observing who to target next.

Beware of the Aswang

Now, let's see what Cryptid Wiki states: "An Aswang is a cryptid in Filipino folklore. The aswang is an inherently evil werewolf and vampire-like creature and is the subject of a wide variety of myths and stories. Spanish colonists noted that the Aswang was the most feared among the mythical creatures of the Philippines, even in the 16th century. The myth of the aswang is well known throughout the Philippines, except in the Ilocos region, which is the only region that does not have an equivalent myth. It is especially popular in the Western Visayan regions such as Capiz, Iloilo, Negros, Bohol, Masbate, Aklan, Antique. Other regional names for the aswang include 'tik-tik', 'wak-wak' and 'soc-soc', which is the noise it makes when chasing prey." Whether you believe in the existence of the Aswang or not, the fact is that - in a very strange way - in the 1950s it certainly did exist And it all revolved around one Major General Edward G. Lansdale. Let's learn a bit about him. As the U.S. Air Force shows us: "Major General Edward G. Lansdale was born in Detroit, Mich., in 1908, the second of the four sons of Sarah Frances Philips of California and Henry Lansdale of Virginia. After schooling in Michigan, New York and California, he attended the University of California at Los Angeles where he earned his way largely by writing for newspapers and magazines. He soon found his way into the better paying field of advertising in Los Angeles and San Francisco. 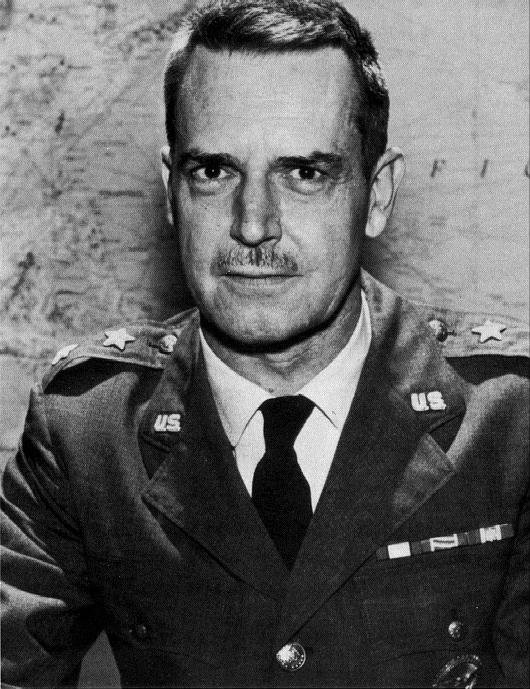 "In World War II, he served with the Office of Strategic Services and later was commissioned as a lieutenant in the U.S. Army in 1943, serving in various military intelligence assignments throughout the war. After several wartime promotions, he was transferred to Headquarters Air Forces Western Pacific as a major in 1945, where he became chief of the Intelligence Division. He extended his tour to remain in the Philippines...During this period, he helped the Philippine Army rebuild its intelligence services, was responsible for the disposition of unresolved cases of large numbers of prisoners of war involving many nationalities, conducted numerous studies to assist the U.S. and Philippines Governments in learning the effects of World War II on the Philippines, and later served as public information officer..."

One of the first things that Lansdale noted when he got to the Philippines was that the rebels there were deathly afraid of the Aswangs and their nocturnal, blood-drinking rampages. So, Lansdale came up with a very strange brainwave. It was a brainwave kept secret for decades, until Lansdale, himself, finally went public, long after his prestigious military career was finally over. As the major general recalled: "To the superstitious, the Huk battleground was a haunted place filled with ghosts and eerie creatures. A combat psy-war squad was brought in. It planted stories among town residents of an Aswang living on the hill where the Huks were based. Two nights later, after giving the stories time to make their way up to the hill camp, the psywar squad set up an ambush along the trail used by the Huks." There was far more than that to the story, however.

That same psywar squad then did something that was very alternative, but that proved to be extremely effective. They silently grabbed one of the Hukbalahap rebels, snapped his neck, and then – using a specially created, metallic device – left two, deep, vicious-looking puncture marks on the neck of the man. But that was barely the start of things: they then quietly tied a rope around the man’s ankles, hung his body from a nearby tree, and let just about as much blood as possible drain out of the body. After several hours, the corpse was lowered to the ground and left close to the Hukbalahap camp, specifically to ensure it was found by his comrades. They did find it. The result, as Lansdale noted, was overwhelmingly positive, from the perspective of the Philippine government, at least. He said "When the Huks returned to look for the missing man and found their bloodless comrade, every member of the patrol believed that the Aswang had got him and that one of them would be next if they remained on that hill. When daylight came, the whole Huk squadron moved out of the vicinity." This went on time after time.

This is a fascinating story: blood was drained from the bodies of the rebels who were targeted for death. The necks of the men were mutilated to make it look like they'd been attacked and killed by Aswangs. And, it was all achieved by the careful use of ancient folklore on the Philippines - and all at night. Now, consider the situation with cattle mutilations in the United States: cattle drained of blood. Usually late at night. And, the project worked for this reason: it required the manipulation of mysterious tales of supernatural beings. In one case, aliens. Aswangs in another. There's no doubt there are parallels here. There were no Aswangs. And there were no aliens killing cows and sucking them dry. But, there was a need for certain people, at certain times, and under certain circumstances, to believe every bit of the cattle mutilation/UFO lore. That's why, on so many occasions, mutilated cattle are left behind to be found on the ground: the cattle need to be seen to ensure the cattle mutilation/extraterrestrial legend continues on. Meanwhile, the real work - of trying to determine the extent to which the food-chain has been affected by God knows what - quietly goes on under a fabricated UFO banner.

Invasion of the Monkey Men: Strange Scares and Mass Panics of the Fortean Kind