“Once people were gone, the boar took over."

That sounds like the opening line to a dystopian horror novel, but it’s far worse – it’s the description given to the BBC by a researcher in radio-ecology, population genetics, and radiation biology at Fukushima University about what he’s found in the lands abandoned by humans after the 2011 nuclear plant disaster. Even more terrifying, these are hybrids may be taking on the worst characteristics of their dual ancestral species. Orwellians fear the radiation could give them non-boar abilities – will they begin walking on two legs and talking? Or are they already?

“Here, using genetic markers, we demonstrated evidence of hybridization and introgression of invasive genes as a result of extrinsic environmental changes that reformed anthropogenic land use in Fukushima Prefecture in 2011. We found that there were likely successful hybridization events in the evacuation zone following a sudden and large biological invasion, that thereafter spread and diluted through time.”

What Fukushima University researcher Donovan Anderson and his coauthors on the boar hybrid study, published this week in the journal Proceedings of the Royal Society B, found in the disaster exclusion zone is a new world devoid of humans and overrun by mildly radioactive boar-pig hybrids. The radioactivity had nothing to do with the hybridization, just in clearing out the area (within a 20 km (12.6 miles) radius of the plant) for wild boars to come down from the surrounding hills, gorge on the rotting food and mate with escaped or abandoned domestic pigs from farms and homes. DNA samples showed the population is a mix of boars, pigs and boar-pigs, with the hybrids making up 16 percent. The hybrids surprisingly stayed inside the exclusion zone rather than returning to their native areas.

"I think the pigs were not able to survive in the wild, but the boar thrived in the abandoned towns - because they're so robust."

That should come as no surprise since boars have spread worldwide to become one of the most destruction and difficult-to-eradicate invasive species ever. The researchers expected to find the hybrids taking on genes from the domestic pigs that would help them resist swine fever and other diseases, but that didn’t happen. Instead, their pig genes seem to be receding and their adaptation to city life appears to be learned – like their switch from being nocturnal to roaming the streets in broad daylight.

“Man is the only real enemy we have. Remove Man from the scene, and the root cause of hunger and overwork is abolished forever.” ('Animal Farm' – George Orwell)

While the Fukushima pig-boar hybrids may agree with Orwell’s animals, their decade of dominance may be coming to a close. Anderson and his colleagues were in the exclusion zone to determine what impact the radioactive disaster had on wildlife to help determine what affect it could have on returning humans. Other than chasing away the humans, the effect seems to have been minimal. On the other hand, the boar and boar hybrid takeover could seriously impact the people who need to irradicate them in order to return. Man is indeed their only real enemy. Let’s hope none of them stormed a library or bookstore and got their hoofs on a copy of “Animal Farm.” 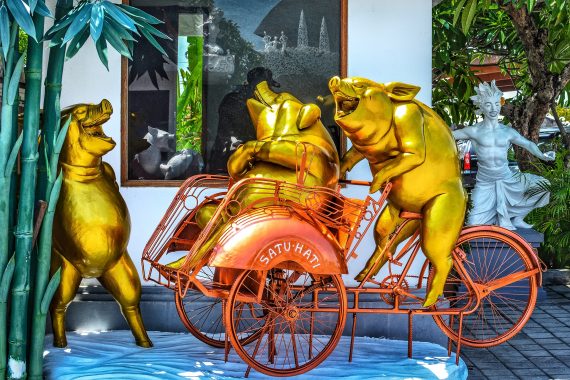 “...out from the door of the farmhouse came a long file of pigs, all walking on their hind legs...out came Napoleon himself, majestically upright, casting haughty glances from side to side, and with his dogs gambolling round him. He carried a whip in his trotter.”

Do we need a better reason to prevent nuclear disasters in the future?

A Police UFO Chase and Strange Things in the Sky at Red Bluff, California