Merriam-Webster say of what defines an affidavit: "In Latin, affidavit means 'he (she) has sworn an oath,' and an affidavit is always a sworn written document. If it contains a lie, the person making it may be prosecuted. Affidavits are often used in court when it isn't possible for someone to appear in person. Police officers must usually file an affidavit with a judge to get a search warrant. Affidavits (unlike similar signed statements called depositions) are usually made without an opposing lawyer being present and able to ask questions." With that said, let's now take a look at some very strange affidavits. We'll begin with a tale of nothing less than a sea-serpent. It’s not often that one sees a story of a giant monster splashed on the front page of the New York Times! That, however, is exactly what happened on July 1, 1908. The article was headlined: "200-FOOT SEA SERPENT. Seen at 3 Bells in Gulf of Mexico – Enormous Rattles on Its Tail."  Times staff said: "What is confidently believed to be a sea serpent has been sighted and narrowly inspected by the officers crew, and fifteen passengers of the steamship Livingstone of the Texas-Mexican Line. All of the witnesses made a sworn affidavit to this effect before United States Consular Agent Charles W. Rickland at Frontera, Mexico." 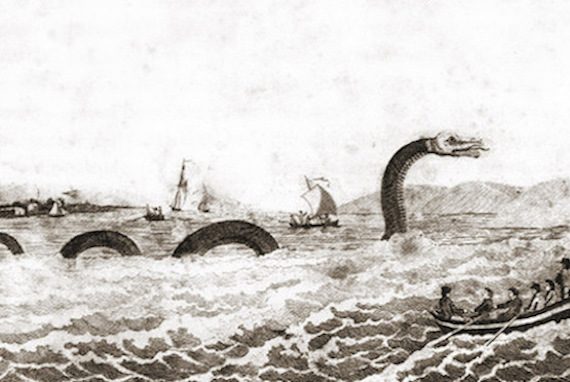 "The statement is signed by Capt. G. A. Olsen and the other officers, George Thomas of Denver, Albert Dean of Memphis, H. B. Stoddard of Bryan, Texas, Mrs. Jessie Thornton of Chicago, and eleven other passengers. In substance it declares that at three bells on the evening of June 24, the Livingstone, bound from Galveston to Frontera, Mexico, making good weather, and about fifty miles north of Frontera, in the Gulf of Mexico, the serpent was sighted off the port bow. The ship got within sixty feet of the creature, and for fifteen minutes stood while all on board viewed the serpent through the glasses. It was apparently sleeping, and not less than 200 feet long, of about the diameter of a flour barrel in the center of the body, but was not as round." Now, let's take a look at another strange creature: Bigfoot.

August 26, 1957, marked the date upon which one of the strangest and most controversial affidavits of all time was prepared and signed. The man that made the sworn statement was one William Roe, of Edmonton, Alberta, Canada. The affidavit was made so strange and controversial due to the fact that it detailed Roe’s very own encounter – and an extremely close encounter – with a large, female Bigfoot. Roe began: "Ever since I was a small boy back in the forests of Michigan, I have studied the lives and habits of wild animals. Later when I supported my family in northern Alberta by hunting and trapping, I spent many hours just observing the wild things. They fascinated me. The most incredible experience I ever had with a wild creature occurred near a little place called Tete Jaune Cache, B.C., about 80 miles west of Jasper, Alberta. I had been working on the highway near this place, Tete Jaune Cache, for about 2 years."

In October 1955, said Roe, he "decided to climb five miles up Mica Mountain to an old deserted mine, just for something to do. I came in sight of the mine about 3 o’clock in the afternoon after an easy climb. I had just come out of a patch of low brush into a clearing, when I saw what I thought was a grizzly bear in the brush on the other side. I had shot a grizzly near that spot the year before."  It soon became apparent that the creature in his midst was no bear: "This one was only about 75 yards away, but I didn’t want to shoot it, for I had no way of getting it out. So I sat down on a small rock and watched, with my rifle in my hand. I could just see part of the animal’s head and the top of one shoulder. A moment later it raised up and stepped out into the opening. Then I saw it wasn’t a bear." It was a Bigfoot. So amazed by what he'd seen, Roe had no problem about bringing an affidavit into the controversy.

Now, let's take a trip to Roswell, New Mexico, so to speak. Back in 1947, when the legendary even occurred, Walter Haut was the Public Information Officer at the old Roswell military base. He said, in a 1993 affidavit, that: "In July 1947, I was stationed at the Roswell Army Air base serving as the base Public Information Officer. At approximately 9:30 AM on July 8, I received a call from Col. William Blanchard, the base commander, who said he had in his possession a flying saucer or parts thereof. He said it came from a ranch northwest of Roswell, and that the base Intelligence Officer, Major Jesse Marcel, was going to fly the material to Fort Worth." Haut also said: "I believe Col. Blanchard saw the material, because he sounded positive about what the material was. There is no chance that he would have mistaken it for a weather balloon. Neither is their any chance that Major Marcel would have been mistaken."