Alien Big Cats and Other Out of Place Beasts in Hawaii

Alien big cats, or rather big cats such as jaguars, panthers, and more that have allegedly appeared out of their traditional habitats, have become a common feature of the world of the weird. Here we have large mystery cats appearing in such far flung places as the UK and Australia, places where such animals have no business being, but it gets even stranger than this. One place where one would likely not be expecting to see such animals is on the idyllic Hawaiian Islands, yet here there have also been such reports of myster big cats roaming about, as well as other creatures that don't really belong.

One of the most intriguing spates of strange animal reports in Hawaii started in 2002 on the island of Maui. In December of that year, a witness came forward to report that he had heard strange sounds in the night outside of his home, and when he had gone to investigate, he had witnessed a large, dark creature that he claimed resembled a large cat like a jaguar. After this, more reports began to come in from frightened residents claiming to have seen the same thing, typically described as a large cat, up to 7 feet long, weighing perhaps 100 pounds or more, dark brown or black in color, with a large head, long tail upturned at the end, and with green eyes that reflect light. It was seen by nearly a dozen witnesses in a short span of time, mostly in the Olinda area of Maui, often witnessed to cross the road at night, but in more ominous cases seen lurking about people’s property. It was even reported from fairly crowded resort areas. One eyewitness account from Maui Now claimed:

I was staying in Kapalua at one of the resorts over the Memorial Day weekend when I swear I saw a large cat-like creature on the property one morning. (No, I wasn’t drunk, nor had I been drinking) The resort workers assured me that there are no such animals on Maui and suggested that maybe I saw a stray dog. But then I heard later that this isn’t the first time someone saw a large cat on Maui. 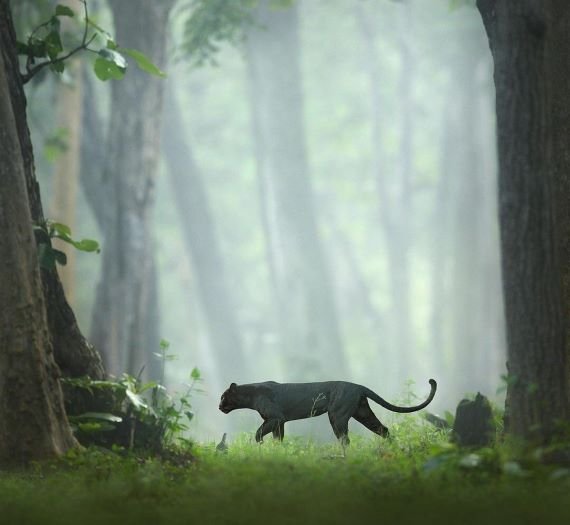 There were also reports of claw marks on trees, paw prints in the ground, dogs or livestock going into a panic for no reason, and eerie screams or growls in the night from no known species on the island. The beast was only ever seen at night, and it was starting to cause hysteria in the region, with people afraid to go out after dark. Before long, the “Maui Mystery Cat” was all over the news, and the sightings began to come in from other places on the island as well. In the meantime, the Department of Land and Natural Resources was starting to take these reports very seriously, believing that perhaps someone’s exotic pet had broken loose, most likely a leopard or jaguar. A search was launched for the phantom cat, but no physical evidence was found, and it was seen as odd that no wildlife could be located that had been attacked by a big cat. Nevertheless, traps baited with meat were set up in the mystery cat’s favorite haunts, but they were never able to catch it. Officials even got creative, using loudspeakers blaring the sound of jaguars and even spreading around urine from African big cats, all to no avail. No hard evidence for the beast was found at all, but the Maui Mystery Cat has become legendary, and is still reported on occasion to this day.

What is it and why is it there? It’s hard to say, but this was not the first time that mystery big cats have been reported from Hawaii. In May of 1984 a witness reported a large, tawny colored cat leap from a ditch onto the road near YWCA's Camp Sloggett on Kaui island, described as looking like a mountain lion. In February of 1988 a big cat reported as looking like a cougar was seen on multiple occasions in the hills above Aina Haina, but a thorough search by officials turned up no trace of such an animal in the area. In June of that same year another big cat, this time described as pure white in color, was seen in the same area. August of 1993 also brought a wave of sightings of a huge tawny cat prowling about in Palolo Valley, a residential area of Honolulu. In all of these cases it was thought that the cat was either a misidentified dog or an escaped exotic pet, such as a 3-month-old cougar which was confiscated from a home in Hawaii Loa Ridge in 1991. Was the cause of these sightings something like this? Who knows?

Bic cats are certainly not something anyone would ever expect to come across in the wild in Hawaii, but there have been other cases of weird out of place animals on the islands as well. In the early 1980s, reports began to come in of people seeing “crocodiles” in the Nu'uanu Reservoir, of Oahu, and wildlife officials did a search of the lake and used baited traps in order to catch whatever was responsible for the sightings. At the time, they were unsuccessful, but in 1983, a call came in that there as a large reptilian animal dead in the spillway from the reservoir to Nu‘uanu Stream. When authorities arrived, they found that it was the body of a caiman, which is a South American relative of the alligator, and it seemed that it had been shot. Not long after that, yet another caiman was found at the reservoir, so it turned out the sightings had been real. Then, in 1991, the carcass of a 6-foot-long alligator was found in Maunawili Stream, and another 5-foot-long specimen was found dead a few months later along the Kapa'a Quarry Road. Interestingly, no eyewitness reports were given for alligators in the area prior to these discoveries, and it was thought that these were exotic pets that were dumped. One wildlife official would say:

It’d be hard to miss a 6-foot alligator that might be traversing the waterways. There wasn’t any indication that the animal lived nearby. The animal might’ve just been discarded there because it’s hard to get rid of a 6-foot carcass. At the time, you could purchase alligators that were maybe 12 inches long for like 20 bucks in places like Florida or California. They’re miniature, they’re cute and people could sneak them into the state and then house them in an aquarium, feeding them a diet of insects and fish. As they grow bigger, however, you need a larger container to keep them. And a 6-foot alligator would require a very large enclosure. At this point, what I would call an irresponsible pet owner might say, ‘I’ll just release it into the wild,’ if it’s native to Florida or Louisiana or similar states. But, in Hawai‘i, we do not have alligators in the wild. Well, we shouldn’t have alligators in the wild.

Another rather weird case of an animal in Hawaii where it doesn’t belong takes us to the Kalihi Valley of Oahu Island. Here, if one is lucky, one might catch a glimpse of one of the area's legendary wild wallabies. That’s right, you can actually see wild wallabies, native to Australia, on Oahu, and it all started back in 1916, with a man named Richard H. Trent. At the time, Trent was known for his personal menagerie of exotic animals he kept at his private zoo, including monkeys, parrots, cockatoos, lovebirds, koalas, and three brush-tailed rock wallabies, a mother, father, and joey. At one point they were attacked by a dog, which killed the joey, but allowed the other two to escape into the wilds. From there, these two individuals began breeding, and their numbers expanded to 50 animals by 1921, then to an estimated 250 in 1981, and these individuals spread to other colonies in Moanalua Valley, Waimano Valley and the Aiea Loop Trail through the mid- to late 1970s. However, in later years human encroachment and pets would cause their range to shrink to just one remote area of the Kalihi Valley.

For a long time, the wallabies of Oahu were considered almost mythical, rarely seen and only photographed a handful of times. This is mostly due to the remote area, the fact that they largely live on private property, and they are extremely shy and skittish creatures. One lifelong resident of the area has said of this elusiveness, “I’ve only seen the wallabies twice in my life. You don’t expect to see little kangaroolike creatures in Hawai‘i, so, when you do, it gets your attention.” It is estimated that today there are only around 40 of the Oahu wallabies left in the wild, although they are not officially tracked or managed since they seem to eat only nonnative invasive plant species and are not considered a threat to the native ecology. Interestingly, although they have been present on the island for over a century, actual clear video footage of the Hawaiian wallabies was only first taken recently, which you can see here. Phantom big cats, alligators, and wallabies are all animals one would likely be unexpecting to see in Hawaii, but this has been going on for a long time, so next time you are on vacation in the islands keep an eye out. You never know what you may see.

The Mystery of the Dogmen: Not Normal Animals at All