The Lincoln Memorial holds an honored place in America, which is why leaders use it for big or special announcements, speeches and celebrations. It’s not clear if what happened in front of the storied structure on August 17th meets any of those criteria … but it might one day. A person claiming to be a retired defense intelligence officer sat in front of Honest Abe and announced that she knows the location of an extraterrestrial base in a mountain in the Mojave desert, has herself met with the aliens, and will be taking a contingent of reporters, scientists and an astronaut there some time before the end of the year.

“Angelia Schultz aka Añjali delivers her first public press conference at the foot of the Lincoln Memorial in Washington, DC regarding her contact with Higher Beings and the subsequent soft disclosure of humanity's need to evolve and transcend to a higher (4th) density which involves a new form of communication without the need for language. She also announced she will lead a scientific and unbiased team of scientists, well-known investigative reporter, journalists, a well-known documentarian, and an astronaut to the Higher Beings base inside a mountain in the Mojave Desert later this year. They will then provide their data to the public to help analyze.”

The press conference was announced on George Knapp’s Mystery Wire website, which contained a link to the entire press conference (watch it here) and Q&A session, which is where the above explanation is located. Mystery Wire stated it will report on the announced but as yet unscheduled visit to the alien base. Her full name -- Angelia Lynn Johnston – doesn’t show up on searches other than in articles about the press conference. At the press conference, she gives her background in the military, government and defense industry. As far as the alien and their base, she says she met two strangers who showed her the tunnels to the base, where she met two aliens of different races who communicated with her through her consciousness. She seems to emphasize that these aliens are peaceful and gives descriptions of them and the base. 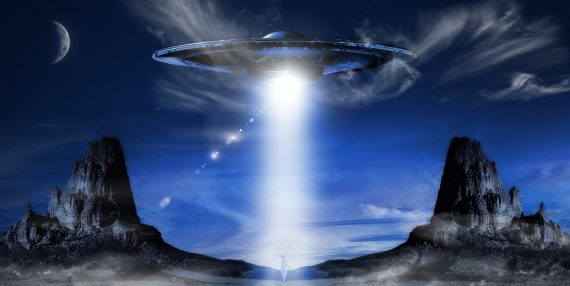 The press conference was recorded and streamed by TT Productions and will be part of an upcoming documentary on whatever it is “Angelia Schultz aka Añjali” is talking about. At first glance, it sounds vaguely like the alleged underground alien base under Archuleta Mesa in near Dulce, New Mexico, that was ‘revealed’ starting in 1979 by Albuquerque businessman Paul Bennewitz and has been rumored but unproven ever since. The Dulce Base aliens were said by Bennewitz to be “diabolical” and planning experiments on humans, but Schultz said the aliens were listening in, approved of her conference and came in peace.

“Yes, they are answering today. Yes. I honestly - we have an ongoing communication and I look forward to all of you developing one.”

As with many contacts with aliens and time travelers in the news lately, she implies they’re here to tell us how screwed up we and our planet are and how to fix it. As with most of these stories, Schultz has no evidence to back up her experience with the aliens or their base. She seemed like a nice person and had her story down pat. We’ll just have to wait until she leads the group of scientists, reporters and an astronaut into their mountain hideaway to find out more.

As always, we’re good at waiting.