It seems you can’t throw a flat stone in the UK without hitting a standing stone, but at least there are organizations to protect most of these historical monuments from being removed to make room for development. In fact, some are protected even from archeologists who would like to excavate and study them. A good example is Arthur’s Stone, a Neolithic double-chambered tomb dating to around 3700 BCE consisting of a 25 ton capstone and nine upright stones which, as the name suggests, have been linked the legend of King Arthur (although not the one with the sword). Supervised excavations have finally been allowed at the site and the secrets of Arthur’s Stone are becoming apparent. Were the indentations on one of them really made when a giant Arthur slew fell on them?

The excavations were led by University of Manchester Professor Julian Thomas on a hill overlooking the Golden Valley and the Wye Valley in Herefordshire. The tomb was thought to have been an isolated monument for the burial of important figures of the time and how the heavy capstone was lifted was a mystery on par with the construction of Stonehenge. (Photos here). As described in a university press release, the excavations explained the latter and showed the former to be a wrong assumption.

“They found that the tomb had first been a long mound composed of stacked turf, retained by a palisade of upright posts set in a narrow palisade surrounding the mound. However, when the posts rotted away and the mound had collapsed, an avenue of larger posts were added, leading toward the mound from the Golden Valley below.”

That revelation means the stones were originally covered by a long wooden structure built over it and other gravesites and very similar to nearby structures excavated in 2013 and named “halls of the dead.” According to Ancient Origins (which has an illustration of what they might have looked like), these “halls of the dead” were at least 230 feet long and 98 feet wide. After all of them fell due to deliberate fires, the stones and mounds were covered with ashes, remnants and more dirt.

"Indeed, the block of upland between the Golden Valley and the Wye Valley is now becoming revealed as hosting an integrated Neolithic ceremonial landscape."

Thomas believes all of the burial halls and mounds were built by the same people and predate Stonehenge. Science Alert explains how Arthur’s Stones came to be stacked.

“Instead of stacking these large stones on top of one another, the ground underneath the main rock was probably dug out to allow supporting rocks to slide underneath. A long mound of dirt was then added over the top, extending all the way into the field to the south, which is where the recent excavations occurred.” 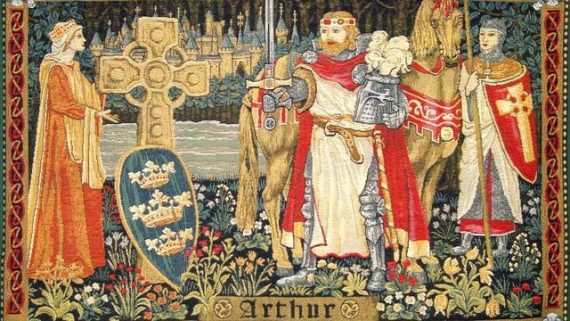 And what about the legends of Arthur and his stone? Besides the giant, who some legends say was buried there with Arthur, there are the indentations on one of them said to have been made by Arthur’s elbows and knees as he prayed on them. The stone also has some actual historical events associated with it -- during the Wars of the Roses, a knight named Turberville was killed in a duel there by another knight; in 1645, King Charles gathered his army there to dine. Later, ceremonial dances were held around the stone and a Baptist service (no dancing) was held there annually on the fourth Sunday in July. And, of course, there’s CS Lewis, who was inspired by the valleys when creating Narnia and based the stone table where Aslan the Lion was sacrificed on Arthur’s Stone.

On second thought ... you can’t throw a stone in the UK without hitting a stone monument OR an Arthurian legend.

The Alien Slayer of the Mysterious Stardust Ranch