For centuries, since the very first ships started making their way towards the horizon and to the edges of our own maps, there have been strange phenomena reported from the vast unknown expanses of our oceans. All manner of stories of sea creatures, unusual anomalies, and others have been brought back by vessels, and one of the more intriguing types of stories has been that of something apparently under intelligent control operating beneath the waves. Called USOs, or "Unidentified Submerged Objects," these are mysterious objects and lights moving about underwater and inspiring awe just as their aerial brethren the UFOs do in the skies above our heads. Some of the more spectacular such accounts of USOs come from various ships at sea of all types, and here we will look at one of the more unusual and unexplained mysteries of the ocean depths.

A very early encounter with something strange in the water comes to us from way back in 1902, with a ship called the SS Fort Salisbury. In October of that year, the vessel was cruising off the rugged coast of West Africa through the Gulf of Guinea in calm seas when something very strange would occur at around 3:05 a.m. It was then that the crew was alerted by a lookout to a massive dark object a few hundred feet off their starboard side. When an officer by the name of Andrew Rayner came to look, he could see that whatever it was, it was truly huge, an estimated 500 to 600 feet in length. He would also note that “it had two lights, one at each end, a mechanism of some kind, or perhaps fins, and was making a commotion in the water.” He also noticed that it had a metallic surface. He would write of the object in his journal as follows:

On drawing nearer, dark mass and lights sank below the surface. Prepared to examine the wake in passing with binoculars. Passed about forty to fifty yards on port side of wake, and discovered it was the scaled back of some huge monster slowly disappearing below the surface. Darkness of the night prevented determining its exact nature, but scales of apparently 1 ft. diameter, and dotted in places with barnacle growth, were plainly discernible. 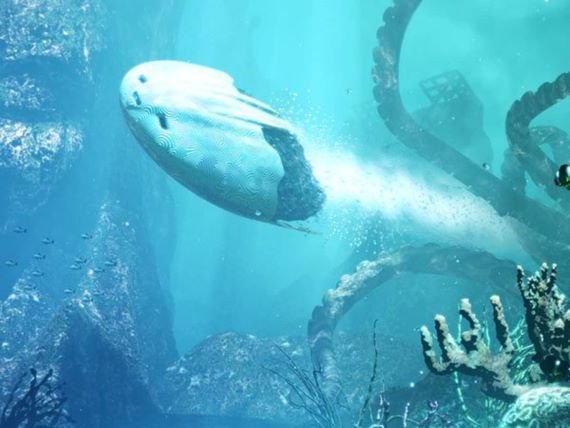 This was about all he was able to see, because the enormous mechanical anomalous object then slowly sank into the black depths below. Considering that there would have been no submarines like that at the time, it is hard to tell just what this ship could have observed. It has been suggested it may have been a large sinking ship, but there was no report of such a lost vessel reported in the Lloyds Registry, and no record of a ship going missing, something that would have certainly shown up in the records for something so massive. The strange case remains unexplained.

Another odd report comes from 1947, off the coast of Malta. In June of that year, an unnamed fishing vessel was about 20 miles off the southern coast, engaged in the routine business of pulling in their nets. As the nets came up, one of the crew alerted the others to something strange bobbing about out on the water’s surface, which appeared to be what they described as a “black submarine” floating about in the waves. It was an unsettling enough sight that the crew finished hauling in their nets and went about starting up the engines to get out of there, and at that moment there was a bright flash of light from the anomalous black shape. This light was bright enough to illuminate the object and the surrounding vicinity, showing it to be smooth, black, and metallic, and there were also small figures now visible upon it, which seemed to be wearing some type of apparatus around their waists and were described as “little men.” As the frightened fishermen looked on, these diminutive figures, described as about the size of 10-year-old children, seemed to scramble into the craft, after which it began to glow so brightly that they could barely look directly at it. The object and is bizarre crew then quickly submerged and disappeared under the waves to not be seen again.

In 1963, we have the case of the Thrift, a collier from Aberdeen, Scotland, which on November 22 of that year was travelling through the area with a load of coal off the Girdle Ness peninsula, just south of the entrance to Aberdeen's harbor, in Scotland. The crew noticed a flashing red light that seemed to be travelling around 20 feet over the waves in the near distance, going at a high rate of speed past their port side. As the astonished crew looked on at this curious sight, the light then did a sudden vertical ascent into the water with a splash, after which it could be seen to travel down through the water out of sight into the dim depths. Thinking that an aircraft had gone down and sunk, the Thrift sent a lifeboat and search crew to the spot where it had gone down, but no trace of debris could be found. What did this crew see out there? Who knows? 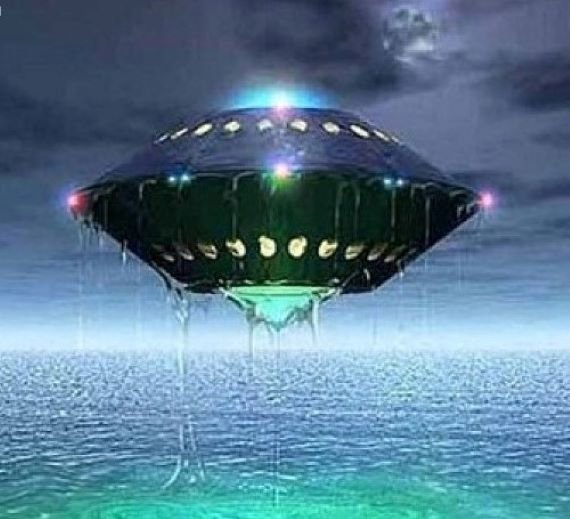 One very strange encounter between a vessel and a USO involved an actual alleged collision with the unidentified object. On February 3, 1965, the 70-ton trawler Star of Freedom was about 15 miles southeast of the island of Barra, in in the Outer Hebrides, Scotland, traveling at about 9 knots at the time, when the entire vessel was rocked by a collision with something beneath the surface. It was obviously something very large, as the collision actually lifted the massive ship’s bow from the water and left a huge hole in the hull. A distress call was immediately made, and efforts to pump the water put into effect, but the vessel was eventually beached at Castlebay Harbor. It was a major collision, but the object that they hit remained hidden beneath he waves. At the time, the ship’s captain, a George Wood, thought they must have surely hit a submarine, but both the U.S. and British Navies denied having any subs in the area at the time. Considering this, and the fact that they were nowhere near land at the time, what could they have possibly hit that would so severely damage a 70-ton vessel and lift it out of the water? It remains unknown.

In more recent years we have a case from 1991, off the west coast of South America. The case, which was reported to the files of the site UFO Casebook, comes from a witness who claims that at the time he had been an operations and intelligence petty officer serving aboard the Knox-class destroyer escort the USS Kirk FF1087, and that they had been part of a drug interdiction force, which consisted of the USS Kirk and three other Naval vessels. Their primary mission was to patrol using a network of radar to track and then intercept drug-running aircraft flying out of Columbia, Panama and Guatemala, as well as to engage any smuggling ships they were able to find. The witness says that his primary duties took place within the CIC, or the Combat Information Center, which he and 22 other specialists manned 24 hours a day, 7 days a week, with them rotating between two 11-man shifts.

The witness claims that he was on CIC duty at 2 a.m. on the morning of December 16, and it was a quiet night with nothing going on. He says he took a break to go up to the ship’s bridge, and at the time the entire vessel was in a state called “darkened ship,” with all of the exterior lights turned off, as well as those on the bridge, meaning the area was only faintly illuminated by instrument panels. He began talking casually with the officer of the deck, and this is when things would suddenly get weird. He says:

All of a sudden and out of nowhere, like a huge flash from a camera, emanating from the starboard bow sea level upward was a huge flash of red glowing light, which lit up our entire ship. It only lit up our ship, not the surrounding ocean, just our ship. It happened so fast, that the OOD, the navigator and I were speechless for about 5 seconds, at which time I looked at the OOD and asked him if he just saw that light. He stated yes in a sullen voice. I then asked the navigator and he replied yes. I then took the navigator’s sound powered headset, and asked the forward and aft look outs, if they had just seen the same red flash, to which the forward look out stated, "YES! WHAT THE HELL WAS THAT?" Aft lookout said yes as well. I then immediately contacted CIC, and asked the CIC officer if we had any aircraft or surface ships in our vicinity, to which he replied clear as a whistle. I asked if we had any submarine activity in the area, to which he replied, no.

What had just happened did not make any sense. The flash emanated from the sea, directly off of our starboard bow (like it was touching our bow), and ascended upwardly so rapidly, creating the effect of the bright red flash. The other weird aspect of this event was that only our ship was lit up within the red flash, not the surrounding sea, but our vessel only. Up until this event, I did not believe in UFOs or USOs. I have no doubt that our ship, steaming along at 12 knots, came right up on a submerged unidentifiable aircraft. I don’t think the aircraft or USO had any idea we were sailing up to them. I think whatever it was, took off in a very unplanned and fast manner, and wanted to quickly identify us, thus the flash.

In the end, after much consideration they decided not to wake the captain, merely logging it as an “unexplained phenomenon.” Indeed, all of these cases could be filed away as such, and there has never been any solid explanation for any of them. We are left to wonder just what these vessels might have encountered out there on the water and beneath it. What is going on in reports such as these and can we make any sense of it? Are there forces that are beyond our comprehension using the oceans or our world for some inscrutable purpose? There is no way to really know for sure, and in the meantime cases of USOs keep coming in. Perhaps in our quest for answers to the UFO phenomenon, in addition to watching the skies, we should also watch below the waves.

My Five Favorite Flying Freaks: When Winged Monsters Go on the Rampage