Carved by God: The Story of Beringer’s Lying Stones

Throughout history there have been mysterious things found in the ground. From inexplicable archeological oddities to impossible fossils and other anomalies, there have been many tales of amazing discoveries along these lines. However, there have also been those waiting on the periphery to fake such findings, and at times this has gotten out of hand to ruin reputations and muddy the waters on what is real or not.

Back in his day, Johann Bartholomew Adam Beringer was considered a genius, at the top of his field and well-respected in the academic community. Born in 1667, from a young age he showed an amazing talent in the sciences, quickly excelling at school to earn his doctorate in medicine at the University of Würzburg, in Würzburg, Germany in 1693, and going on to be appointed as a professor at the university just a year after that. He would then go on to hold prominent positions including chief physician to the Julian Hospital and Dean of the Faculty of Medicine at the University, as well as the keeper of the botanical garden, which was a huge deal at the time considering that medicine in that era was heavily dependent on botanical knowledge; many medicines based on plant products. He also had many well-respected members of the social elite as patients, including serving as an advisor and Chief Physician to the Prince Bishop of Wurzburg. Throughout his meteoric rise through the ranks of medicine and academia, Beringer pursued other studies of the natural world, including the study of what was called oryctics, meaning “things dug from the earth,” and “petrifactions,” which we would know today as fossils and ancient buried artifacts, and this was the area in which he would become best known, although not in a good way.

In 1725, Beringer was actively looking for strange or unusual rocks and fossils at the nearby Mount Eibelstadt, and to do this he had hired three local teens by the names of Christian Zänger, and brothers, Niklaus and Valentin Hehn. The boys would go out and dig around on the mountain, bringing back any interesting rocks they could find. For the most part this were just odd rocks and curiosities, which Beringer would inspect and put into his collection without much fanfare, but on May 31, 1725, the boys would bring back something truly remarkable. On this day they presented Beringer with one stone shaped like what looked to be a gleaming sun, and two stones that bore engravings that looked like worms. Beringer was in shock, as this was an incredible find the likes of which he had never seen before, and so he told the boys to go out and see if they could find more of these bizarre stones. He would not be disappointed.

Over the next several weeks, the boys brought in more of the anomalous stones, which came in all shapes and sizes, including creatures such as birds, lizards, spiders, as well as less definable beasts that weren't known to exist, as well as celestial objects like suns, moons, and comets. Even more astounding was that some of the stones were inscribed with the Hebrew name of God in Latin, Arabic, and Hebrew characters. The excited Beringer came up with a theory as to what the meaning of this groundbreaking discovery might be, finally coming to the conclusion that these stones had been carved by none other than God himself, calling them “capricious fabrications of God,” and surmising that their origins were divine, a sort of first draft for life on earth during His creation of the earth. To us today, this seems like a pretty big leap to make, but at the time there wasn’t a lot of scientific agreement on what fossils even actually were or what produced them, and creationism was not considered completely absurd, so Beringer believed that this would be a groundbreaking theory that would absolutely blow everyone’s minds. He got one of his graduate students, a Georg Ludwig Hueber, to help him start writing a book on the findings titled Lithographiae Wirceburgensis, or “Würzburg Lithography,” which would include Beringer’s theories on the stones and hundreds of illustrations and engravings. Unfortunately, although he didn’t know it yet, Beringer was being had. 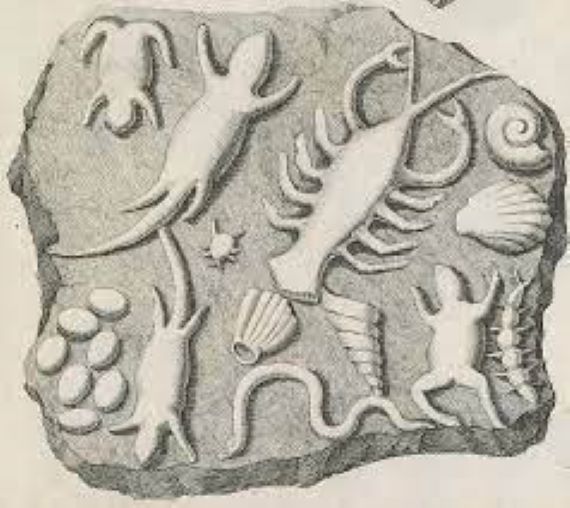 A professor of geography at the university by the name of J. Ignatz Roderick and the university librarian Johann Georg von Eckhart, had been jealously watching Beringer’s rise to fame and glory for a long time, and considered him to be an insufferable, arrogant know-it-all whom they despised. In order to put him in his place, they had concocted a bit of a prank, in which they had created various bizarre shapes in pieces of limestone and placed them on the mountain to be found, in the end planting nearly 2,000 of the carved stones in and around Mount Eibelstadt. After that, they had brought one of Beringer’s young assistants in on it, who led the other boys to the “fossils” on the mountain. In order to keep the ruse as secret as possible, only one of the boys knew about the hoax, there were real fossils mixed in with the fake ones to throw off the scent of a hoax, and it had all gone perfectly to plan. Indeed, it had gone too perfectly.

As Beringer worked on his Lithographiae Wirceburgensis, Roderick and Ekhart started to think that perhaps their prank had gone a bit too far. They had wanted to show Beringer some humility and put him in his place, but not necessarily completely destroy his entire career and reputation, which they were certain would happen if he were to go through with publishing the book. They felt so bad about the impending train wreck, in fact, that they tried to suggest to Beringer that he was being duped and that he should not publish, but Beringer would have none of it. To him, Roderick and Ekhart were merely jealous of his amazing discovery and were trying to derail his book, saying “our idiomorphic stones are not the handwrought products or fraudulent recent artistry, as some persons have shamelessly pretended.” Beringer rather ironically was convinced that the two hoaxers were jealously trying to delegitimize his book and discredit his work, when in fact they were trying to save him, and he was so confident that he was right that he went through with publishing what would ultimately prove to be the downfall of his career.

Shortly after publication, it soon became clear after much criticism of the findings that indeed he had been pranked. Beringer realized this and went about collecting as many copies of the book as he could so that they might be destroyed, something he would spend years doing. He also brought the hoaxers Roderick and Eckhart to court in an effort to clear his name over what were now being called the Lügensteine, or "lying stones.” Although the whole fiasco didn’t really completely obliterate his career, it definitely tarnished Beringer’s credibility and reputation. He would publish more books and papers, but was never taken quite so seriously ever again and was a bit of a laughing stock for the remainder of his life. Roderick and Eckhart perhaps came out of it even worse, losing their positions at the university and being outcast from the academic community. To add insult to injury, after years of trying to recall copies of the book and erase it from the face of the earth, even in death Beringer would not be able to escape the shadow of his misstep, with a second printing of Lithographiae Wirceburgensis appearing in 1767 and an English translation in 1963, both of which no doubt had him rolling over in his grave. It is in the end a very curious case of an archeological hoax that went to far, which haunt us to this day, and an interesting historical oddity that shows that even scientists in high positions can be duped from time to time.

More on the Mystery and Matter of Russian Machinations and UFOs