Deceased Actor May Be Haunting the Midland Hotel

The Midland Hotel in Bradford, England, is reportedly haunted by the ghost of a former actor.

When a ghost hunter named Kenny Charles was conducting an investigation at the Midland Hotel, he captured some interesting evidence as he explained, “I was getting the spirits to do things. I have got a device called a Mel Metre and it has to be touched to be active and how hard it is touched shows a frequency with the lights and the amount of energy going into it. To see if the spirit could hear me I did a countdown from five and he touched it and the heat source went off.”

He added that he believes the spirit of actor Sir Henry Irving haunts the building. The famous stage actor and his manager Bram Stoker were said to have stayed at the hotel while Irving was performing at the Theatre Royal – he was playing the archbishop in Lord Tennyson’s “Beckett”.

On October 13, 1905, Irving suffered a stroke and collapsed onto the stage floor prior to being taken to the hotel lobby where he died. Since his death, several people have claimed to have seen his apparition in the hotel room where he stayed prior to his final acting performance and death. Those who have seen the entity have claimed that while there is hazy smoke around it, they still recognized it as being Irving. Additionally, prior to the Theatre Royal being demolished in 1989, witnesses had reported seeing the actor’s ghost there as well.

According to a medium that Charles talked to, if you cheer and clap, Irving’s ghost will appear, so the paranormal investigator set up a laser trip wire and began cheering for the actor. At that point, the laser was set off without any explanation. 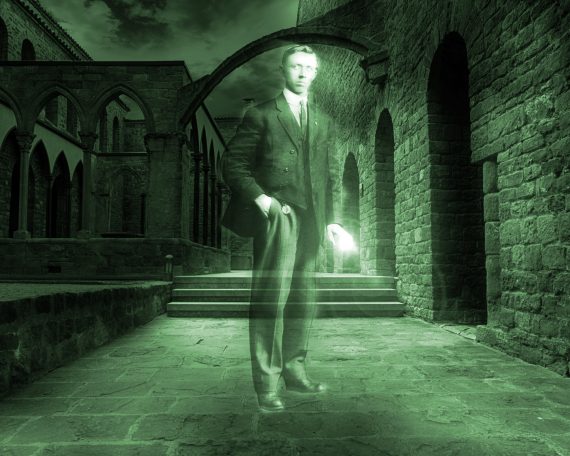 At another point during the investigation, Charles’ friend was suddenly “pulled back” and a light in the corridor began flashing on command. But the most interesting thing was that he captured a photo that he claims is of the deceased actor. You can decide for yourself whether or not the photo is of a ghostly Sir Henry Irving as the picture can be seen here.

Constructed back in the year 1890, the Midland Hotel sure has a long history with alleged ghostly activity. Perhaps Sir Henry Irving has refused to leave the hotel even after his sudden death more than a century ago.