Haunted Kentucky Theater and the Ghost of “Paramount Joe”

The Paramount Arts Center (formerly known as the Paramount Theatre) in Ashland, Kentucky, opened in 1931 and was initially going to show silent films but ended up having movies with audio to entertain the crowds. And of course, it is rumored to be haunted – specifically by a ghost named “Paramount Joe”.

As the story goes, one day in the early 1940s while the theater was being renovated, all but one of the construction workers went for lunch and that’s when the lone worker named Joe died inside of the auditorium. His co-workers found him hanging from the stage rafters (nobody ever found out whether it was an accident or a suicide). His spirit apparently never left as Joe’s ghost is supposedly still haunting the building even to this day. Ever since his death, items have inexplicably gone missing; people have felt sudden cold spots; others have felt taps on their shoulders; unexplained sounds have been heard; lights have mysteriously turned on and off, and some have even witnessed a male ghost wearing work overalls.

Tyson Compton, who was the marketing director of the Paramount Theatre, asked a medium to go into the building and she claimed that the ghost told her that he “...did not have a good life otherwise,” and that “...when he came to this theater he thought it was so beautiful, he didn’t ever want to leave.”

Even country music star Billy Ray Cyrus felt a ghostly presence so he talked with the spirit and asked for his help while filming the video for “Achy Breaky Heart”.  Apparently, Cyrus connected with the spirit as he left him an autographed picture that was hung up on the wall. But when the employees decided to eventually take the picture down, “Paramount Joe” was pretty upset as he allegedly tore down all of the remaining pictures from the wall.

Several years later, when Cyrus performed at the theater, he had another experience when “All of the sudden the sound went completely out for like five seconds and he just stopped and laughed and said good to see you too Joe,” as explained by Compton. 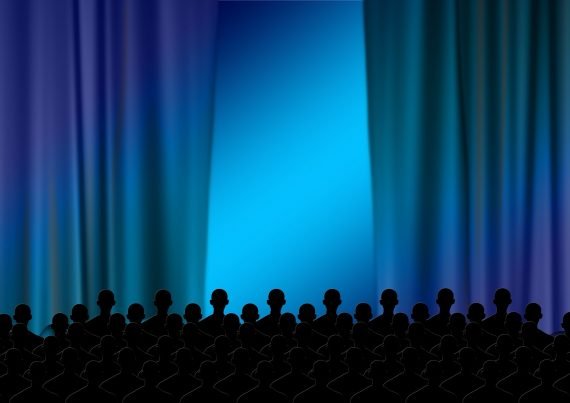 Additionally, two ghosts may have possibly been photographed outdoors when a man named Mathew took several pictures from outside of the building with an old film camera and in one of them, there appeared to be two apparitions. “I took multiple photos of the place,” he explained. “All of them look like the first photo. Clear and clean.” “But the second photo seems to have two figures crossing the street on the cross walk. Maybe a man and woman? I don’t think it’s a trick of the light. Like I said, all the other photos came out just like the first, except for this one.” (His photo can be seen here.)

While seeing a ghost is certainly a creepy experience, “Paramount Joe” is said to be a “good” spirit. If you’re going to have a ghost roaming around, you might as well have a good one.