Tales of unidentified creatures that look part-animal and part-human have been around for centuries. And, all across the planet, too. The United States has Bigfoot. The Himalayas are the home of the Yeti. Australia has the Sasquatch-like animal known as the Yowie. China has its version: the Yeren. The Orang-Pendek lives deep in Sumatra. And the list goes on and on. There's one creature that doesn't really get the publicity it should. It's the Menehune of Hawaii. Although their average height is said to be barely two to three feet at the maximum, they have physical qualities that suggest they may have a linkage to the Human Race. Although they are covered in hair and have red-colored faces, their large eyes are reportedly filled with intelligence, and their short noses and pronounced foreheads echoes something akin to Cro-Magnon man, rather than a monkey or an ape. Tales of the Menehune cannot have been influenced by today’s fascination for Bigfoot. There is a very good reason for this: reports of the small, hairy residents of Hawaii date back to at least the 1700s. In 1786, for example, a census was held during the reign of King Kaumualli. Of the almost 2,000 people that took part in the census, almost six dozen were said to be of the Menehune tribe! That, alone, suggests they were a form of human, even if clearly not of the Homo Sapiens variety.

A notable account of a very close encounter with more than twenty Menehune occurred during the latter part of the 1940s, when dozens of schoolchildren – overseen by their superintendent, George London – encountered the chattering group of hairy dwarfs playing on the grounds of an old church in the Waimea Valley. When they realized they had been seen, the creatures raced for the safety of a tunnel that existed under the old church – something suggesting the Menehune  were – and still may very well be – chiefly subterranean in nature. The people behind the To Hawaii website say of this strange creature: "The Menehune have been known to use magic arrows to pierce the heart of angry people, igniting feelings of love instead. They also enjoy cliff diving, and according to local lore, they were smart, extremely strong and excellent craftsmen. They were rarely seen by human eyes, and they are credited with mighty feats of engineering and overnight construction. These industrious master builders used their great strength to build temples (heiau), fishponds, roads, canoes and houses. One such structure they are believed to have built is Kikiaola, also known as the Menehune Ditch, a historic irrigation ditch that funnels water from the Waimea River on Kauai. Another one of their amazing feats is the legendary overnight creation of the Alekoko Fishpond on Kauai, which archaeologists estimate to be around 1,000 years old."

Hawaii Discount have focused time on the Menehune, too: "Oahu’s Kualoa Ranch features fishponds that are reminiscent of the fishponds constructed by Menehune, and the island of Kauai actually has a fishpond that are said to have been constructed by the legendary Menehune. One of the most prominent Menehune constructions is the lava rock wall between the Alekoko Fishpond and the Hule’ia River, stretching 900 feet long and 5 feet tall, and creating a dam that prevents fish from crossing the dam into the river, creating a food source for locals. While the existences of Menehune have long been debated, there is no debate to their influence on the islands. 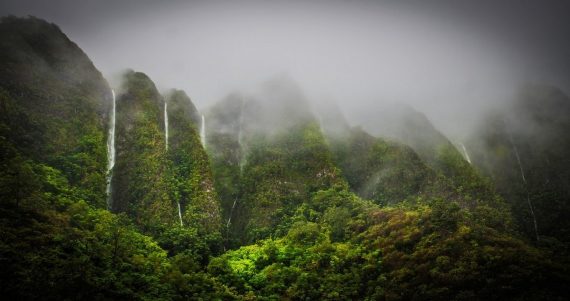 "The legendary islanders are featured as the mascot of a number of elementary and high schools on Oahu, and their likeness are found on souvenirs at local stores. Local families even give Menehune credit for things that cannot be explained or when household items miraculously start working after not working previously." Of course, many might say that the collective story of the Menehune is simply that: a story. It should be noted, however, that there is strong eyewitness evidence that these such creatures do exist. Or, at least, did exist. Maybe, one day, a Menehune will stroll out of the dense parts of Hawaii and put the debate to an end. If so, I sincerely hope that the creature/creatures will be allowed to return to from where the came. The last thing they need is us, the Human Race, blustering around like mad things, and trying to capture one. That would be a tragedy.

Evidence of the Largest Asteroid Impact Witnessed by Modern Humans