Mysterious Heat on Jupiter May Finally Be Solved After 50 Years

After baffling scientists for 50 long years, the mystery of what’s causing Jupiter’s heat may finally be solved. The mysterious “energy crisis” on our Solar System’s largest planet is believed to be caused by auroras.

As for what is causing Jupiter to remain so hot, astronomers believe that the powerful magnetic field causes strong auroras which ultimately heats up the planet. When a magnetic field is strong, it sends electrically charged particles towards the poles that cause them to hit molecules and atoms in the atmosphere that create beautiful lights. And Jupiter has a very strong magnetic field (much more powerful than Earth’s). The volcanic eruptions on Jupiter’s moon Io sends a lot of particles into the planet’s atmosphere. Furthermore, the size of the Gas Giant and its powerful winds are contributing factors in how the heat moves throughout the planet.

The astronomers came to this conclusion by analyzing data collected by NASA’s Juno spacecraft, JAXA’s (Japan Aerospace Exploration Agency) Hisaki satellite, and the Keck II telescope. They watched how an aurora sent a pulse of heat towards the planet’s equator as James O'Donoghue, who is a planetary space scientist at JAXA's Institute of Space and Astronautical Science, noted in a statement provided by the Keck Observatory, “It was pure luck that we captured this potential heat-shedding event,” adding, “If we'd observed Jupiter on a different night, when the solar wind pressure had not recently been high, we would have missed it.” 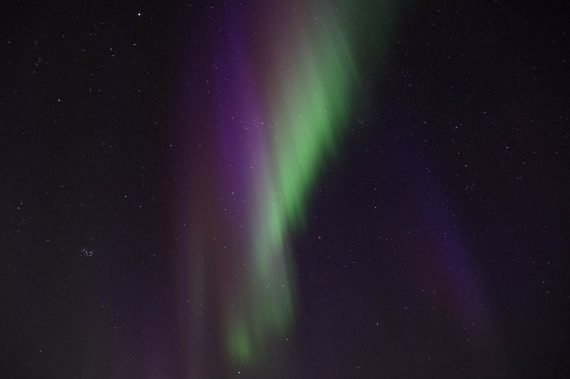 By using a near-infrared spectrograph, Keck performed two observations (April of 2016 and January of 2017) that showed how electrically charged hydrogen molecules traveled from the poles to the equator. Keck II then measured the temperatures. (An artist’s impression of Jupiter’s upper atmosphere infrared glow can be seen here.)

They even found something else that surprised them, “We also revealed a strange, localized region of heating well away from the aurora — a long bar of heating unlike anything we've seen before,” explained Tom Stallard from the University of Leicester, “Though we can't be sure what this feature is, I am convinced it's a rolling wave of heat flowing equatorward from the aurora.”

The study was published in Nature where it can be read in full.