Prehistoric Spanish Cave Art Was Made by Neanderthals

Recent analysis of prehistoric Spanish cave art has revealed that it was Neanderthals who created it. The cave art, which dates back over 60,000 years, was made on a huge stalagmite (a column that rises up from the floor of a cave) located 100 meters (328 feet) into Cueva de Ardales which is close to Málaga, Spain. Pillars of mineral deposited by water formed a dome-like shape and the markings were found inside of folded rock that looked like drawn curtains.

The markings were done with a red pigment that was made from ocher and were deliberately painted. The ocher, which is a natural pigment that is found in clay, would have been found elsewhere and brought to the cave by the artist. In fact, the ocher would have been “...collected, transported and prepared in advance of entering the cave, implying deliberation and planning, which are additionally implied by the need to have adequate lighting,” explained João Zilhão who is an ICREA (Catalan Institution for Research and Advanced Studies) research professor at the University of Barcelona and the University of Lisbon. 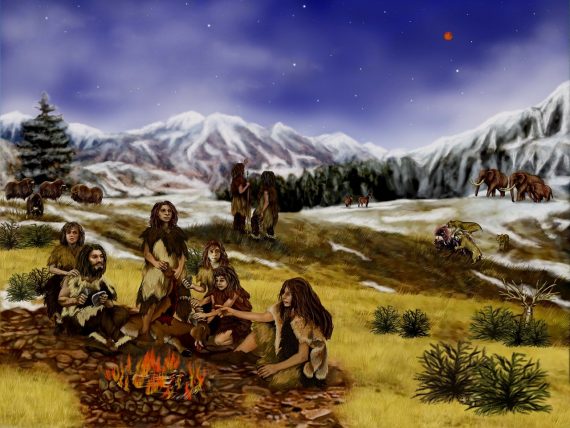 This contradicts previous research that claimed the marks were made naturally. Since the red markings were only found on a small portion of the stalagmite and nowhere else in the cave, the new research concluded that they were deliberately made. As for how the markings were made, it is believed that the artist splattered the paint perhaps by chewing the pigment and then blowing it out of their mouth by a straw-like object (possibly made from bone).

Also, two separate pigments were used at different times which points to the artists using the cave on numerous occasions over a long period of time. And since Neanderthals have now been officially named the artists, this is just more proof that they were much smarter than previously believed. The researchers think that the paintings were meant to mark their territory as they explained in their paper, “the dome is the symbol, and the paintings are there to mark it as such, not the other way around.” (Pictures of the cave art can be seen here.)

“The dating of the flowstone is consistent with the hypothesis that Neanderthals repeatedly visit the chamber in which the flowstone is located to, we argue, symbolically mark it, hence demonstrating that we are dealing with a long term symbolic tradition,” stated Francesco d'Errico who is the director of research with the French National Center for Scientific Research (CNRS) and a professor at the University of Bergen.