If one of the items on your bucket list is “Traveling through a wormhole and exiting alive,” your chance to check it off may be sooner than you think. A researcher in Portugal claims he’s found the secret to building a stable, traversable one which would also allow the wormhole to check off “no longer theoretical” from ITS bucket list. Ready for the ride of a lifetime?

"Any traveler trying to cross a wormhole that does not satisfy this will be crushed inside as the tunnel collapses."

In his preprint paper, “Double gravitational layer traversable wormholes in hybrid metric-Palatini gravity,” João Luís Rosa, a physicist at Aveiro University in Portugal, dives right into Einstein’s general theory of relativity, which has been the bible on gravity and spacetime for over 100 years. As Live Science points out in its interview with Rosa, theoretical wormholes are possible under general relativity but they’re not traversable because they’re behind one-way event horizons, and they’re unstable, collapsing as soon as even a photon enters one. One solution is to build the wormhole using matter with negative mass, which is possible but has never been found in the universe, or with negative energy, which to date has only been achieved at quantum scale. Rosa has a solution that solves all of these challenges. 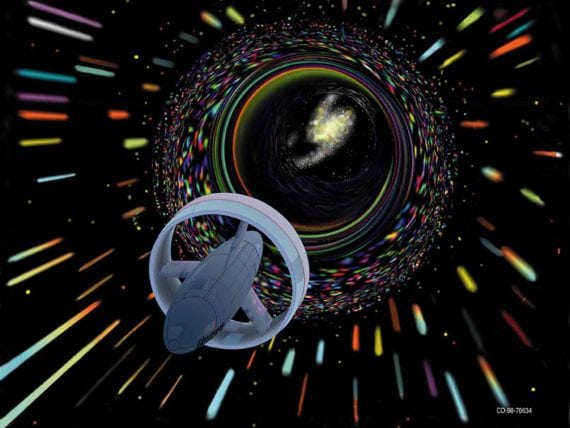 “What happens is that these gravitational effects needed to guarantee the traversability of the wormhole happen naturally if one modifies gravity, and exotic matter [matter with negative mass] is no longer needed to serve this purpose."

There you go. Modify gravity and you can safely travel through a wormhole to whatever lies at the other end. High five!

Wait a minute, you say. How does Rosa plan to modify gravity?

“We start by showing that for a particular quadratic-linear form of the action, the junction conditions on the continuity of the Ricci scalar R and the Palatini Ricci scalar R of the theory can be discarded without the appearance of undefined distribution terms in the field equations. As a consequence, a double gravitational layer thin-shell arises at the separation hypersurface. We then outline a general method to find traversable wormhole solutions satisfying the NEC at the throat and provide an example. Finally, we use the previously derived junction conditions to match the interior wormhole solution to an exterior vacuum and asymptotic flat solution, thus obtaining a full traversable wormhole solution supported by a double gravitational layer thin-shell and satisfying the NEC.”

Rosa satisfies the NEC (Null Energy Condition), which causes wormholes to collapse, by using a modification of general relativity called generalized hybrid metric-Palatini gravity, which allows more flexibility between matter and energy, and space and time. He found this theory gets around the negative energy problem with a simple very thin double layer of regular matter in front of the wormhole’s ends, which can be passed through safely while preventing negative energy collapsing the wormhole while you’re in it hoping to exit the other side and meet yourself in the past so you can give yourself the good news.

Wait a minute, you say. This is all still theoretical and still requires a tweak in the old reliable general relativity theory, right?

That’s true. Rosa now plans to search the Milky Way for stars near its supermassive black hole center in hopes of finding examples of this modified gravity. Since we still haven’t found negative mass or negative energy yet, his chances are not high – but not impossible.

Don’t go checking off Traveling through a wormhole and exiting alive” just yet, but keep your pencil handy.