Sharks Were Surprisingly Unaffected by the Dinosaur-Killing Asteroid

Recent analysis of numerous shark teeth has revealed that sharks were pretty much unaffected by the asteroid that wiped out the dinosaurs and other species around 66 million years ago.

Researchers studied the morphology of 1,239 shark teeth belonging to several different species, including eight that are still alive today and one that is extinct. The teeth date back to a 27-million-year time frame between 83.6 million years ago during the Cretaceous Period and 56 million years ago during the Paleogene Period. This transitional time frame when the dinosaurs went extinct is called the K-Pg boundary.

Interestingly, sharks were already beginning to decline before the K-Pg boundary; however, during the mass extinction event that wiped out the dinosaurs, sharks were surprisingly unaffected. It’s important to note that several shark species – specifically the ones with triangle-shaped blade-like teeth – did become extinct during that specific time period, but it could have been caused by the demise of their prey.

On the other hand, numerous other sharks increased in population during that time, such as those in the Odontaspididae family. Since they had cusped teeth used for eating fish, they would have increased in numbers because their prey (such as finned fish) became more diverse during the early part of the Paleogene Period.

This is very significant news regarding the history of sharks as their research was the first ever global investigation of dental morphology involving numerous species during the time of the mass extinction. “Ultimately, our study reveals a complex morphological response to the end-Cretaceous mass extinction and highlights an event that influenced the evolution of modern sharks,” the researchers wrote in part. The study was published in PLOS Biology where it can be read in full.

A picture of the shark teeth can be seen here. 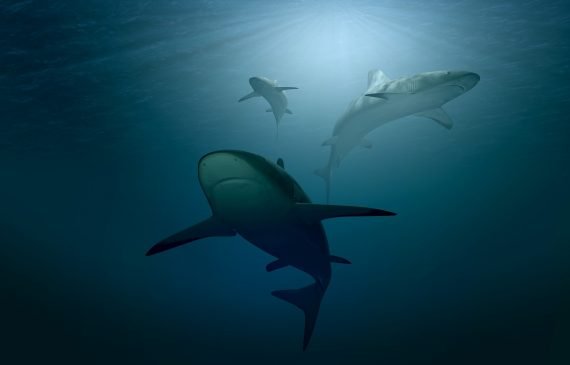 With that being said, there was an event that occurred around 19 million years ago that almost wiped out all sharks. By analyzing ancient ichthyoliths – fossilized shark scales called denticles in addition to fish teeth that were found in the ocean floor’s sediments – the researchers found that sharks went through a drastic decline in numbers 19 million years ago. In fact, about 90% of all sharks on the planet were wiped out. It’s still unknown whether the event lasted days, weeks, or years, and the cause of it is still up for debate although researchers don’t think that it was caused by anything environmental like climate change or predators.

Sharks have certainly lived through many catastrophic events over millions of years and thankfully they’re still around today although they are currently declining in numbers again so let’s hope they can start thriving again.

The Reasons Why the “Alien Big Cats” of the U.K. Should be Categorized Under “Supernatural”