Strange Creatures on Puerto Rico: No, Not the Chupacabra

If you put the words "strange creatures" together with "Puerto Rico," it will almost certainly make people think of the legendary Chupacabra. The fact is, though, there are many more weird beasts roaming around the island, as you'll see now. Pucho is someone who I interviewed on Puerto Rico back in 2005 with Canada's Redstar Films. Not too long earlier, he'd seen a very strange creature, but it definitely wasn't a Chupacabra. He was walking past a local place of worship when he heard a very strange noise: it was a loud, almost bellowing, roar. It filled the air and brought Pucho to a sudden halt. He looked around for a few moments and then, to his horror, saw what was responsible. Perched in a large nearby tree was a huge, bird-like creature, but one which was easily the size of a fully-grown man; possibly even bigger. It was covered in feathers and once again bellowed in fear-inducing fashion. What happened next amazed Pucho. He said that the creature didn’t fly away in the fashion that one would expect from a bird. Incredibly, it simply opened its wings and – instead of flapping them furiously – rose up into the skies above with what seemed to be barely an effort. In seconds it was gone. It was a fascinating day. A mysterious one, too. Now, onto another one of Puerto Rico's monsters that is definitely not a Chupacabra. 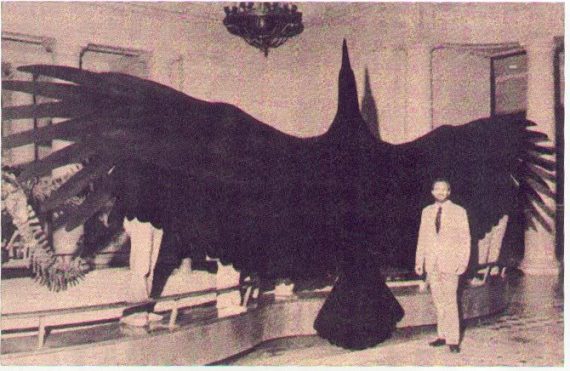 How about Bigfoot? Have you ever thought that Puerto Rico might have its very own equivalent of the world's most famous monster? And deep in the heart of the island's El Yunque Rain-Forest, no less? Most people probably haven't given much thought to such a thing. There are, however, a few such stories circulating around on the island. Indeed, I heard some of those accounts while I was on Puerto Rico in 2013, with  Galafilm Productions of Canada. The show was National Park Mysteries. One of the things that particularly interested me was the claims of the witnesses that the Bigfoot of Puerto Rico, which is said to be somewhat more agile-like and smaller, has the ability to become invisible. Such claims have been made about the Bigfoot of the United States. Most Bigfoot seekers in the USA, however, ignore just about anything and everything that even has a little bit of the paranormal attached to it. Too bad: the Puerto Rico-Bigfoot cases are genuinely fascinating.

My fifth quest to uncover the truth of the Puerto Rican beast known as the Chupacabra was in late December 2008. It turned out to be a profitable trip. Pretty much as soon as I arrived, I learned that one particular part of San Juan – Rio Piedras – was living in what could only be termed a state of downright fear. For more than three weeks, there had been sightings, exclusively at night, of a large black cat creeping around the neighborhood. Around four feet long and muscular, it was believed to have killed and eaten at least fifteen pet cats in the area, savaged a sheep or several, and apparently terrified a handful of people who crossed paths with it in the backstreets of Rio Piedras, late on one particular Saturday night. Now, let's move onto another strange affair. In fact, a definitely monstrous affair. Norka is someone who me and monster-hunter Jon Downes interviewed in 2004, while filming for the SyFy Channel's Proof Positive show.

Late one night in 1975, and while driving through El Yunque, Norka saw something that could only be termed as a giant bat. Indeed, it was around five-feet in height and had a huge pair of wings. She slammed on the brakes as the dark, shuffling thing went from one side of the road to the other and that was then lost in the dense trees. It very much reminded me of the huge cockroaches in the 1997 movie, Mimic. Check it out and you'll see what I mean. What all of this serves to demonstrate is that Puerto Rico isn't just the home of one type of unknown animal. Clearly, there are more than a few of them. And, based on what I have shared with you in this article, it wouldn't surprise me if there are other, unknown, animals deep in El Yunque and elsewhere in the heart of my absolute favorite place to visit.

Creepy Photo Outside of Flint Castle May be a Ghost