The Bizarre Case of the Bride of Bigfoot

Tales of Bigfoot have over the years encompassed a wide range of phenomena ranging from the somewhat plausible to the decidedly far-out. We have sightings of what could be actual living creatures interspersed with wild stories of a more paranormal nature and everything in between. One area that has long been thought of as particularly fringe, even within the field of cryptozoology, is that of those individuals who claim to have been actually kidnapped and held captive by these beasts, and one really weird story comes to us from the wilds of Northern California.

Back in 1976, 25-year-old Cherie Darvell, of Redding, in Shasta County, California, was an amateur filmmaker who had become very interested in the Bigfoot phenomenon. At the time she was dating a man named Ron Olson, whose father was Frank Olson, of the ANE film distributing company owned by Russell Neihart, Bishop of the Mormon Church in Salt Lake City, in Utah. This already seems a bit odd, and making it even odder was that Neihart’s good friend, Jerry Romney, who was also a bigshot at ANE, had become a bit notorious in cryptozoology circles for claiming to have been the guy in the ape suit in the famous Patterson-Gimlin Bigfoot film, and not only that, but he had infamously claimed to have signed the payroll checks for Roger Patterson from July to October 1, 1967. So far, so weird, and it is unknown just how much this has to do with what was to come for Darvell, but she certainly already had her foot in the world of Bigfoot, and not necessarily in a good way.

In May of 1976, Darvell embarked on an excursion into the wilds of the Six Rivers National Forest, in Eureka, Humboldt County, California, along with a group of others including her boyfriend, Olson, and two other filmmakers be the names of Ed Bush and Terry Gaston. Their mission was to capture footage of the elusive Sasquatch, which was well known for being sighted in the region and which at the time had been sighted several times in the area. Indeed, they were headed towards the Bluff Creek area, which is famously the location of the Patterson-Gimlin Bigfoot footage. It seemed like as promising a place as any to go hunting for Bigfoot, and by all accounts they would get more than they bargained for.

At some point during the expedition, Darvell allegedly got separated from the group and seemed to vanish without a trace. For three days a massive search was carried out in the area, but no sign of her could be found. On the third day of the search, something very strange would happen, when Darvell walked into a ski lodge far from where she had disappeared, looking dazed, disheveled, and carrying what was reported as a “a bushel of lilies and twigs.” At first, she seemed too disoriented to really talk about where she had been, but as she gained lucidity and started to respond to questioning, Darvell began to weave a very bizarre tale. 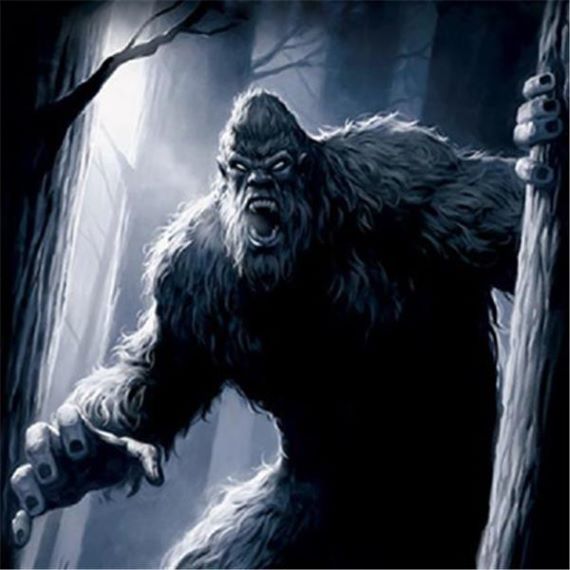 She claimed that on the day she had gotten separated from her group, it had been about dusk, and as she wandered about she had encountered none other than a hulking Bigfoot there in the woods. The hairy giant reportedly had just stood there staring at her for a few moments, before grabbing her and dragging her off through the forest to what she called its “den.” Once at the den, for the next few days she claimed that the Bigfoot had kept her captive, bringing her gifts of berries, flowers, stones, pebbles, and dead birds, in what she had taken to be a gesture of affection. She says that she was only able to escape one day when the Sasquatch had fallen asleep, after which she snuck out and found her way to that lodge. When the incredibly outlandish story made the rounds, she was soon being called the “Bride of Bigfoot,” but authorities not only did not take any of this seriously at all, deeming it to be a prank, but it also even led to a court case in which Humboldt County tried to sue Shasta County to make them pay part of the $11,613 cost of the search operation. One report in the February 8, 1978 edition of the Record-Searchlight Newspaper would say of the farcical case:

A Del Norte County Superior Court judge who obviously doesn't believe Bigfoot exists has ruled that Humboldt County must pay the $11,613 cost of a 1976 search for an alleged Bigfoot "kidnap victim" by the name of Cherie Darvell. Judge Frank Peterson commented in making the ruling that the search for Bigfoot is "at least an exercise in futility" and said he'd "hiked the hills and mountains of Northern California for almost 50 years and the biggest footprint I ever saw was my brother Bob's." Humboldt County Counsel Raymond Schneider argued before Peterson that state law required Shasta County to reimburse Humboldt County because the case involved search and rescue for a Shasta County resident. Shasta County Counsel Robert Rehberg countered that Miss Darveil's disappearance was at best a real kidnapping, and even the Humboldt County officers' reports indicated they were skeptical about the abduction reports.

Judge Peterson ruled that a county is entitled to reimbursement by another county only for the search and rescue operations for lost persons or persons "in danger of their lives," and not for investigations of crimes. The judge ruled that the term "in danger of their lives" applies to natural causes, such as floods, heavy snows or other calamities not caused by other human beings. Rehberg said he was "pleased" with the judge's decision. But he said he sympathizes with the dilemmas faced by Humboldt County officials, ranging from whether to begin the search for Miss Darvell to trying to determine who should pay the costs of the search. Rehberg said that if Humboldt County authorities had been willing to stipulate that Bigfoot is a Shasta County resident, negotiations over the costs might have been possible.

Making it all even more bizarre was that Darvell’s fellow filmmakers, Bush and Gaston, would later claim that they had actually captured footage of the Bigfoot carrying her away up the mountain, although they refused to release it. In the end, Darvell would sell her story to the Weekly World News, that last bastion of quality journalism (sarcasm heavily implied) for $250 dollars, and it would all sort of eventually fade away, the common view being that it was all a publicity stunt. However, Darvell would continue to insist that she was telling the truth. The whole thing is almost certainly a hoax, yet it is so bizarre and so adamantly defended by the one involved that is has managed to achieve a certain cult status within the history of Bigfoot phenomena, and whether any of it is true or not, it remains a singularly wild tale indeed.

The Ayahuasca Journey: In Search of the Sacred Visionary Experience