The Black Monk, a Most Violent Ghost, Meets Some Peaceful Ghost Hunters (With Photos)

The mark of a good ghost hunter is the desire to investigate the most terrifying of cases, leaving the rest to those willing to pay the price of admission for organized ghost tours. Dean and Veronica Buckley breathe that rarified air – and occasionally suck it in in big gulps as they pursue the best (or worst) England has to offer amongst its vast collection of haunted abodes. That path naturally led them to a place earning the triple honors of placing on the lists of Most Haunted, Most Violent Ghosts and Best Inspirations for a Classic Horror movie. If you haven’t figured it out by now, the place is Number 30 East Drive in Pontefract, East Yorkshire, the ghost is the Black Monk of Pontefract, the movie is “When the Lights Went Out,” and the ghost hunters are the team of Dean and Veronica Buckley.

“We were at Diane's bedroom door, I knocked said, 'is anyone there?' Suddenly the door just flew open. I search the room completely, checked under the bed and checked the walls but there was nobody in that room."

That would make a great opening line for a horror movie, but in this case it would be a documentary on the recent visit to Number 30 East Drive by the Buckleys. As told to Yorkshire Live, they spent the night at the infamous haunted house and had multiple encounters with what could only be the Black Monk, who came into infamy over 50 years ago. The makers of “When the Lights Went Out” admit their 2012 film is "loosely" based on the story of Jean and Joe Pritchard and their two children, Phillip and Diane, who moved into the house in 1966. Philip was the first to experience something unusual – a cold gust of wind, footsteps, a mist falling from the ceiling, unexplained pools of water and a bumping sound.

The poltergeist violence started that night – kitchen utensils rattling, a tea dispenser spraying, lights turning on and off, cupboards shaking, a chest of drawers shaking and more. Philip and his grandmother were the only witnesses, and nothing like this happened for two years. That when the same things began again, this time with a mysterious green foam, the sounds of heavy breathing and barnyard animals, and violence – young Diane (12) in particular felt pushed and shoved, had her hair pulled and was even reportedly dragged around. Many of these events were witnessed by local police and a vicar, and they occurred in cycles.

The entity eventually appeared wearing a black robe and face-covering hood – hence the name The Black Monk. As more family members and witnesses reported seeing and experiencing the violence, mediums were brought in and some determined the house was built across from where a 16th century gallows once stood – a gallows where hundreds were executed, including a Cluniac monk who murdered a girl about Diane's age. Surprisingly, the events ended suddenly, but the Pritchards had enough and moved out. The story stayed local until books, paranormal TV shows and the movie made it infamous. However, the Black Monk seems to still be there – a band filming a music video in the house in 2020 heard mysterious footsteps and had unusual equipment failures.

Which brings us to Dean and Veronica Buckley.

“During a break, a few of us were chatting in the kitchen and we heard a growl. The latch of the coal shed started shaking violently. I was first on the scene with Veronica behind me and the others. I opened it very slowly and there was nothing there. As I searched the coal shed the back room felt really heavy that night."

Dean provided pictures he took during their overnight stay at 30 East Drive. In these two, he says you can see a mysterious figure in the doorway. Perhaps the most unusual photo – Dean says this is a pink ball of energy in the coal shed with him. 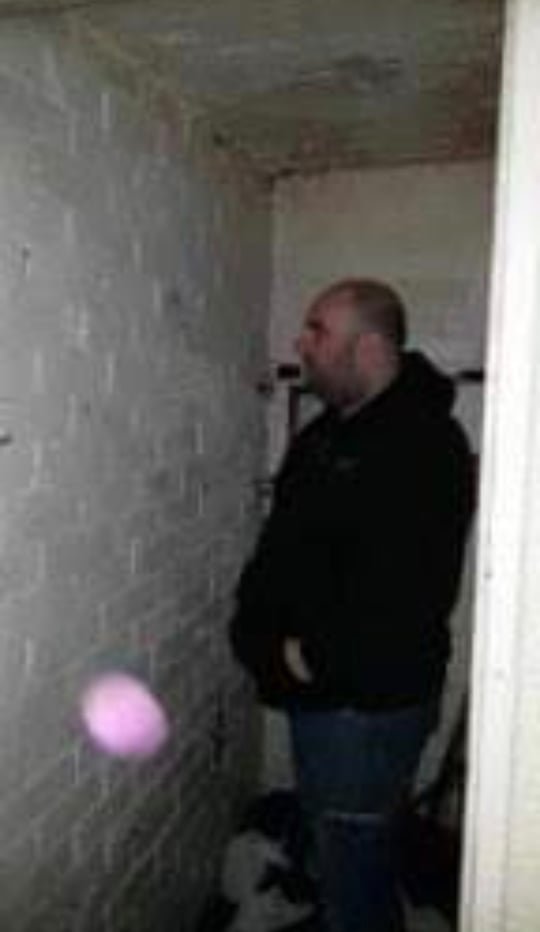 Dean and Veronica were not physically attacked, but they reported experiencing poltergeist activities similar to those of the Pritchards over 50 years ago. Is the Black Monk still there – haunting the place of his death?

Special thanks to Dean Buckley for providing the photos and additional details on a most unusual night in the house of the Black Monk of Pontefract.

The Harrowing Haunting at Hellfire Farm