$40,000 Reward for Info in North Dakota Where Cattle Killings May Be Linked to UFO Sightings

While the recent spate of mysterious cattle mutilations in the U.S. have been in Oregon, they occur in other states as well. As they become more public, we’re finding variations on both the style and the possible causes. While many people blame extraterrestrials looking for laboratory samples, especially since UFOs or strange lights are often seen around the sites of the mutilations, others believe it’s simply sick humans either gathering body parts for rituals or to hurt a rancher’s business. A recent large-scale cattle killing in North Dakota seems to have some of everything.

“The Stutsman County Sheriff’s Department and the North Dakota Stockmen’s Association are offering a $40,000 cash reward for information that leads to the arrest and conviction of the person or persons responsible for the deaths of 58 pregnant cows and at least 15 additional preborn calves from surviving cows in a Stutsman County pasture on the Arrowhead National Wildlife Refuge in July.”

While it sounds like the Stutsman Sherriff’s Department and the Stockmen’s Association believe the cattle massacre was done by humans, Stutsman County Sheriff’s Major Jason Falk tells KVRR that it appears the deaths were caused by something that was not naturally occurring. A veterinarian and livestock stewardship specialist examined the corpses and ruled out lightning, anthrax, blue-green algae; clostridial disease, lead poisoning, lack of water and naturally occurring nitrate toxicity. It appears the cows were not mutilated and some investigators are trying to link the killings to two hay fires on a nearby ranch in April. 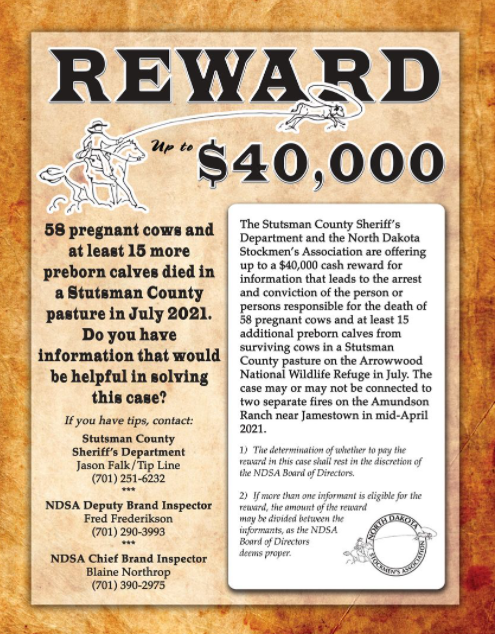 While no one appears to be suggesting aliens, perhaps they should look into this UFO sighting and dead cow event in North Dakota earlier this year, as reported to MUFON:

“Object was caught by motion detection on a camera mounted on top of structure out at remote unoccupied farmstead object moved from north to south - unclear how far away - next motion event was daylight. 2 dead cows found in a tree row less than a mile away - no obvious cause of death, covered in mud. No farms with cows around for 10 miles, no reported missing cows from nearby farms never seen anything like this out there on the cameras."

The case probably didn’t get much news coverage because the UFO captured on security camera footage looked more like a floating chandelier (watch the video here) than the ubiquitous Tic Tac shapes seen and recorded by so many military personnel lately. However, how did two dead cows show up in the area so far away from any ranches?

North Dakota has its fair share of UFO sightings, but is most famous for the Gorman dogfight – named for the incident in 1948 when former WWII fighter pilot George Gorman was flying alone at night over Fargo and claimed he saw what looked like the flashing taillight of another aircraft passing by. The light became solid and moved faster than his P-51 Mustang plane, banking and making sudden seemingly impossible turns as if in a dogfight with Gorman. Just as suddenly as it appeared, it came at him and at the last second shot upward and disappeared.

The UFO was also seen by two air traffic controllers a nearby airport, two Civil Aeronautics Authority employees and a pilot and passenger in a Piper Cub airplane flying near Gorman and the airport. Despite that, investigators concluded what Gorman chased and the others saw was a lighted weather balloon launched 10 minutes before the encounter.

Does the mass cattle killing at the Arrowhead National Wildlife Refuge have a similar plausible human-caused explanation? Did anyone report any UFOs or bright lights in the area? How much of a reward should be offered if the killers are aliens?

Or is it something more sinister that evil humans or aliens? Did the cows see the Miniwashitu – a Missouri River monster with red buffalo-like hair, a single eye, a horn and a long and jagged spine sticking out of its back whose appearance causes anyone (or anything?) that looks at it to go insane and die?

Whatever it was, let’s hope the local officials have the opportunity to pay out the reward and stop any future cattle killings.

The Mysterious Aggressive UFOs of the Solomon Islands