On June 4, 2021, the Buckley Air Force Base in Aurora, Colorado, was renamed Buckley Space Force Base, the home of Space Force's Space Delta 4 unit. Shortly before that and continuing to the present, a man living close to the base has been photographing UFOs, particularly Tic Tac UFOs, and posting videos and photos on YouTube and Instagram. Are they related? Is anyone else seeing them?

This is not balloons on a string the string would be moving around all over the place i saw this clearly with my eyes and i have no idea wtf it is. A f16 flew by it as well at 8:35 time stamp start watching and space force doesnt respond to balloons and its not a weather balloon it was big also the string never moves in the wind.”

The Daily Sun broke the story of Jason Suraci, a resident of Aurora, Colorado, who has been watching and recording UFOs day and night for at least six months and posting them with time, location and commentary on this like size, proximity to planes and other objects in the videos, and his own speculation on what the UFO might or might not be. In particular, he seems to be aware that many of the UFOs look like balloons – either weather or party – and points out characteristics that shoot these theories down like a deflated Mylar birthday present. He is also aware that these are occurring near Buckley Space Force Base, although not over it as was reported by The Daily Sun. 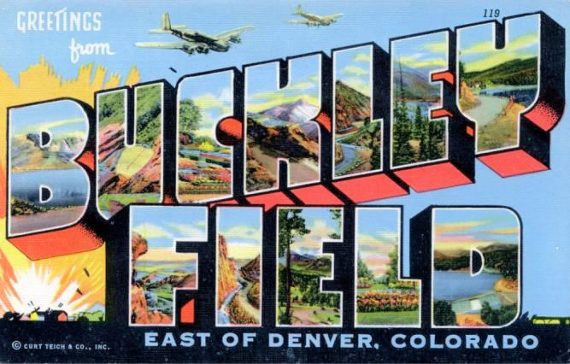 Our Vision and Mission clarify our path forward and solidify our organizing purpose as a combined, total force Airmen and space professionals (military, civilian, and contractor) in the Buckley Garrison:

Are these UFOs aircraft from the Space Force at Buckley Space Force Base? Buckley Field was built in 1938 as a bombing range, was an Army Air Corps training school during World War II, became an inland Naval Air Reserve Station after the war, and became an early participant in space defense in 1969 when the United States Air Force began development on the Defense Support Program ground station there -- the Defense Support Program operates the reconnaissance satellites of the Satellite Early Warning System. Buckley is also the home of the Colorado Air National Guard's 140th Fighter Wing. In 1996, Air Force Space Command activated the 821st Space Group space warning mission and in December 2001, a new Defense Support Program and Space-Based Infrared System ground station was activated.

If the Buckley Space Force Base is the home of the Space Force Delta 4 Unit and has such a long history of manning space early warning systems, it would make sense that the base would be testing systems to identify, track and respond to UAPs like the Tic Tac UFOs which seem to have snuck up on the USS Nimitz and other naval vessels, outmaneuvered U.S. aircraft and allegedly baffled experts trying to determine if they’re made by humans on Earth (and if so, from what country) or aliens. If that’s the case, then Jason Suraci of Aurora, Colorado, may be witnessing the actual Tic Tacs (if they’re ours), captured Tic Tacs (if they’re from another country), reverse-engineered Tic Tacs (if they’re from aliens) or something else. What does he think?

While he’s obviously enthused about UFOs and posting the recordings of whatever it is he’s seeing, he also uses the opportunities to plug a line of night vision binoculars so others can help him out. Is he in any danger from the military for posting these videos? If he hasn’t been contacted yet, probably not. Why hasn't anyone else reported them? Good question. What are these UFOs? If this were an isolated incident, the usual bugs-birds-balloons theories would apply. However, this seems to have been going on for months near a major Space Force and space security base. This is something that requires more investigation.

No wonder he’s looking for more people with night vision binoculars. Be careful out there, Jason.