As Purported Nessie Footage Makes the Rounds, This Artist and Cryptid Enthusiast Says ‘Not So Fast!’

In recent weeks, footage that allegedly shows Nessie, the famous monster believed by many to reside within the waters of Scotland’s Loch Ness, has been making the rounds. The video appeared online after a camper claimed to have spotted the creature in drone footage he made while visiting the lake.

Fifty-four-year-old Richard Mavor said he was surprised when video he captured for his YouTube channel appeared to show a large figure looming beneath the lake’s waters near the shoreline. The mysterious shape bears resemblance to a plesiosaur, an extinct aquatic reptile whose long neck has long been compared with popular reports of Scotland’s most famous monster. 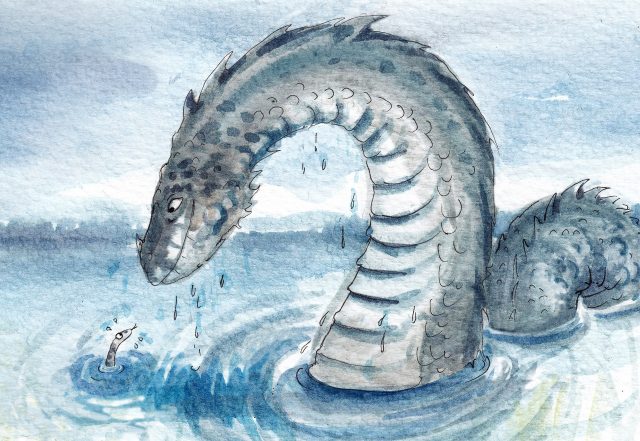 A more plausible explanation for Mavor’s footage might simply be pareidolia, the all-too-human tendency to spot familiar shapes and patterns where none exist. This, especially because no hard evidence in support of the existence of an unrecognized species in Loch Ness has ever surfaced in the many centuries that accounts of a water monster believed to reside there have persisted.

However, not everyone is entirely convinced that the footage is a simple misperception, let alone evidence of a monster in one of Scotland’s oldest and deepest lakes.

According to artist Sam Shearon, it seems more likely that a model had been used to aid in creating the appearance of a monster beneath the lake’s waves. In fact, he and several colleagues believe they have pinpointed the exact toy used to achieve the effect.

“Mike Playfair and myself along with Stephen Feltham (longest vigil on Loch Ness world record holder) have collectively looked into this, finding all manner of hoax evidence,” Shearon explained in an email.

Attributing the identification to his training as a graphic artist, Shearon says there are several indications that the footage is more than it appears to be.

“I noticed the 'creature' in the footage wasn't moving,” Shearon explains, “but instead glided into place.”

“To me it instantly looked like a toy,” Shearon says.

In addition to his skill as an artist, Shearon is a longtime proponent of the study of “cryptids”—animals unrecognized by science, but whose existence may be supported by anecdotal evidence in the form of purported eyewitness sightings—and often depicts dramatic, stylized artistic renderings of the creatures in his work.

To Shearon, it was almost immediately evident that some kind of model had been used in the most recent Nessie footage.

“I sent the first similar toy image I could find to my friend Mike Playfair,” Shearon explains, “[and] he agreed I was onto something.”

“After a little further digging I found another toy and we all agree that THIS is the image used, added in later, superimposed into the drone footage.”

The toy in question, available for purchase on a UK-based website, appears to be a dead-on match for the subject of the alleged Nessie footage appearing online.

Shearon and his colleagues expressed frustration about how much coverage the footage has received.

“Unfortunately and annoyingly this alleged footage has been going viral,” Shearon said in an email, noting the many outlets that have already covered it, adding that “it's NOT real... AT ALL.”

However, for Shearon there is more evidence in support of a hoax than just the similarity between the film, and toy he and his colleagues identified as the likely model.

As Shearon explains, “A chap named Roland pointed out that at one point you see the exact same drone footage which doesn't show the creature.”

Shearon called the multiple appearances of the footage, some without the purported “monster” a “rookie mistake.”

Accounts of the famous monster at Loch Ness date back many centuries, although modern observations began to receive significant attention beginning in the 1930s, particularly after the sighting by Mr. and Mrs. George Spicer in July 1933, which received widespread attention in newspapers at that time.

Paradoxically, Spicer’s observation of a creature with what appeared to be a long, undulating neck did not involve seeing the monster in the lake, but rather, crossing the road heading in the direction of Loch Ness some distance ahead of him, as he and his wife were traveling adjacent to the Loch.

In the decades since the Spicers had their sighting, dozens of others have come forward claiming to have observed a monster in the lake—some as recently as early September, 2021—in addition to several photographs that allegedly depict the monster.

Arguably, the most iconic photo said to depict the beast was taken in 1934 by a surgeon whose identity remained unknown for many years. Known as the “Surgeon’s Photograph,” it was later revealed that a small model was used to fake the image, which for decades had been reprinted in books, articles, and films as among the best evidence supporting the reality of the Loch Ness enigma.

However, not all alleged hoaxes have had quite the same staying power as the infamous Surgeon’s Photograph, as Shearon says of the most recent attempt.

“I did my digging and within ten minutes I figured it out,” Shearon says.

Wind Speeds are Getting Stronger in Jupiter’s Great Red Spot