Hauntings and Dark Mysteries at the Mysterious Grovely Wood

Lying out in southern Wiltshire, England, not far from Salisbury near Wilton, and only 8 miles from Stonehenge, is one of the largest woodlands in the country, a place called Grovely Wood. Designated as an important wildlife site, the area is also historically important, with much Iron Age and Roman archaeology in the vicinity of the woods, as well as the ruins of Iron Age/Romano-British settlements, hillforts, and farming enclosures, and with an ancient Roman road meandering right through it. It is all located in a region known for its mystical mysteries, populated by numerous quaint villages and Medieval towns, as well as haunted places. Indeed, Grovely Wood itself has long said to be haunted, cursed, or both, and it is full of plenty of dark lore and mystical mysteries.

Perhaps one of the most well-known spooky stories orbiting the wood is that of four sisters called the Handsel sisters, who were Danish women who had moved into the town of Wilton in 1737. Just as soon as they arrived, the area was devastated by an epidemic of smallpox, which ravaged the village and killed at least 136 people in short order. Considering the timing involved and how few new visitors came that way, it did not take long at all for the locals to come to the conclusion that this was a clear case of witchcraft being carried out by the sisters, who they accused of being in league with the Devil and going about some grim business. This was an era in which to even be suspected of being a witch never really came to much good, and the townspeople soon forged an unruly mob to relentlessly hunt down the offending witches.

When the Handsel sisters were finally found, they were dragged from their hut kicking and screaming, and without trial were hauled off into Grovely Wood to be ruthlessly bludgeoned to death and buried apart from each other so that they could not conspire against their murderers, each grave marked by a twisted, gnarled beech tree, with some stories saying that these trees grew that way after the burials as a sign of dark magic in the ground. To this day, the trees are often decorated with ribbons and trinkets, and a hollow at the base of one of the trees has served as sort of an altar for the sisters, with people often leaving trinkets, amulets, and other offerings within, and the ghosts of the “witches” are said to prowl about the area to this day. One Maria Williams, of the Twilight Shadows Paranormal investigative team, has said of her visit to this place:

We carried on walking and passed the trees where the Handsel sisters were allegedly murdered. My colleagues who have visited this area during the day say that gifts and offerings are left inside a hollow of one of these trees. They were right. There were a copious amount of little treasures left by people as offerings to the Handsel sisters. As we entered the clearing, we all felt the power of this area. The energy is immense. I feel it is a positive force but due to the intensity of the energy, it can overwhelm people and make them feel very uneasy. I showed Jacky and Sharon the first tree with the little offerings left in the hollow at the back. We then took Jacky and Sharon to the second tree. Jacky did not think that this area was particularly active even though it is quite close to the other tree. She thought that "it seemed dead." We approached the third tree. Sharon said that she felt that the 'Handsel no.3' tree held a positive energy. The team have previously commented on this during previous visits to Grovely. We stayed here for a while. We went back to 'Handsel no. 1' tree. We gathered around its mighty trunk and tried to tune into the energies there. I felt a small gathering of people, all women. They came very close to us and the intensity of their presence seemed to fill the clearing. I think they wondered what our motives were.

I suggested that Jacky 'called out.' She did and shortly afterwards I tried. We heard the noise of the bats which had been flying around us all evening. Suddenly Sharon thought she heard a woman's voice. I called out again and again, requesting that any spirit made any noise for us. Some of us thought we heard a chiming sound which stopped us in our tracks. Shortly afterwards from the other side of the clearing some of us heard muttering. We stayed there for quite a while and the energy continued to get stronger. Jacky suggested that perhaps some of the energy we were feeling may be emerging from elementals within the area. It was strange that she should say this as when I had visited the woods earlier in the day with Loretta, we thought that the woodland possessed a strong elemental presence. Eventually, we returned to the Roman road and started to walk back. I felt that walking the road was more frightening than being near the alleged resting place of the Handsel sisters. I felt completely protected there.

Reports of the sisters haunting the area are so intense that there have even been erected little enchanted log circles that supposedly will protect you if you are accosted by them. Another spooky story from the area is that of what is called the “Burcombe Woodsman,” supposedly the ghost of a poacher who was hanged from a tree here for his crimes, and who is often seen as a shadowy, hooded figure prowling about and prone to physically harassing visitors by tripped them or yanking on their clothing, his presence supposedly heralded by the cracking of a twig. Maria Williams has said of her team’s experience with this entity:

We were wondering if we would see the 'Burcombe Woodsman' who is said to haunt the Grovely forest. James said that he kept thinking that he saw figures leaning on the trees. This happened four times throughout our time there. Vikki kept hearing a sound which she described as a 'throaty cough.' She felt that it was someone trying to get our attention. It was difficult for everyone to hear noises clearly as it was raining quite hard and the sound of the raindrops was quite loud. We heard all the obvious animal noises but some noises just did not seem to be of a natural origin. Suddenly as we were walking, I felt my jacket being tugged really hard, twice. I swung around quickly convinced that it was one of the team and was quite amazed and a little frightened that it was not. Vikki was the nearest person to me and at the same time that my jacket was pulled, she felt as if she had been shoved out of the way. James kept seeing flashes of light in the trees. We wondered if it was lightning seeing as it was raining so hard. It was not torches and we were too far from any road for it to be car headlights. It did not seem to be thundering so we drew no conclusion as to what the lights could be.

We had walked just a little way on and I heard a deep throaty sound like the clearing of a throat (a male). Vikki also heard it and she said that this was the noise that she had heard previously. I must admit that it really did sound like someone trying to get our attention. We carried on walking. James, Vikki and I kept hearing footsteps on the road behind us. Every time we looked around, there was no sign of anybody or anything walking behind us. I was thinking about the feeling of the tugging of my coat which I experienced earlier when suddenly I felt my trouser leg (left) suddenly pulled up to my knee. I was really shocked as I could tell it had not been hooked up with a twig as I had felt the hands touching my leg. My trouser leg was then pulled back down. If the situation had not been so frightening, I would have found this funny. Vikki and I discussed whether I should ask the perpetrator to pull down my hood but I thought I would either freak out or laugh hysterically if it happened.

We commenced our walk. I looked over to James and I saw a person walking by the side of him but just a couple of steps ahead. This person was hooded and was walking with his head bent down. I looked in front of me and saw the rest of the team; everyone was ahead except for me, Vikki and James. I looked back to the figure and it was gone. This was a split second and there was nobody within the vicinity. Vikki then said that at the same time she had also seen a shadowy figure walking beside James. If the ghost of the 'Woodsman' does exist, the apparition that Vikki and I witnessed fits that category perfectly. We heard chains and asked whether it was James’s jingling. He said that it was not. 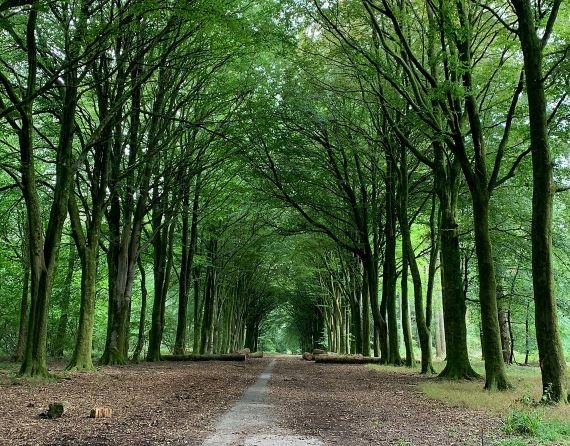 There is also a lot of paranormal activity reported from the Roman Road that winds through the forest, where there is supposedly a ghostly band of Roman soldiers that marches up and down it. Although never actually seen, visitors will report the disembodied voices of men speaking Latin, as well as the sound of stomping footsteps like marching and a cold chill that will sweep through the area. Occasionally there will be seen ghost lights that coincide with the phenomena, but not actual apparitions, and there is almost always the intense and unsettling feeling of being watched here. The whole forest has other miscellaneous paranormal phenomena orbiting it, including anomalous sounds, shadow figures, black hounds with glowing eyes, flickering lights in the dark, and many others. This is obviously a place to which weird forces are drawn, and whatever the reasons might be, Grovely Wood seems to be ground zero for some pretty strange stuff, one of those places that will perhaps forever exist in the realm beyond our understanding.

Is it Possible that the Wendigo and Bigfoot are One and the Same?