The remains of giant carnivorous birds were found at four different locations in the central part of Argentina. These large teratornithid birds were part of the Teratornithidae family that lived from 25 million to 12,000 years ago.

Teratorns, which are related to today’s storks and New World vultures (turkey vultures and condors), were one of the biggest birds to have ever inhabited our planet with a massive wingspan of 7 meters (23 feet) and weighed as much as 70 kilograms (154 pounds). They had narrow hooked beaks and jaws which would have allowed them to feast on small animals like mice, young birds, frogs, lizards, and fish (it is believed that they swallowed their food whole). It is thought that they became extinct when their food sources dramatically declined in numbers.

Their fossils have only been found in North and South America with the first ever bones being found in California’s La Brea Tar Pits back in 1909.  “It is believed that teratorns originated in South America because their oldest remains were found in 25-to-5-million-year-old deposits in Brazil and Argentina,” explained Dr. Marcos Cenizo who is a paleontologist in the Centro de Ciencias Naturales, Ambientales y Antropológicas at the Fundación de Historia Natural Félix de Azara – Universidad Maimónides.

He went on to say, “After this period, teratorns disappeared from the South American fossil record, but became remarkably abundant and diverse in North America until their extinction at the end of the Pleistocene period, some 12,000 years ago.”

The researchers were able to determine this by analyzing four teratorn remains that date back between the Late Middle and the Early Late Pleistocene Period. While the four specimens were similar in morphology and size to the Teratornis merriami species, they also had several differences which suggest that they belonged to an entirely new species. 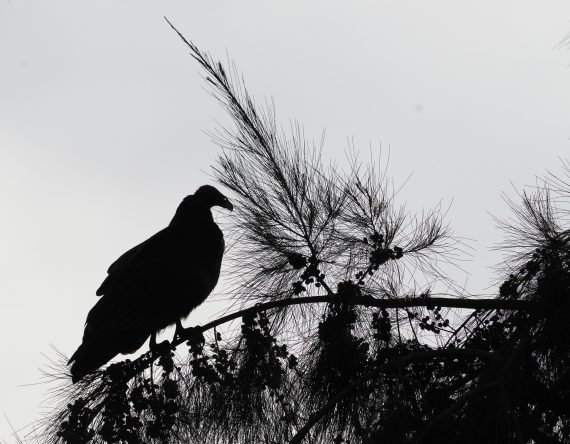 It was previously believed that teratorns were like vultures but these new studies have questioned that hypothesis as the authors wrote in part, “The early assumption that teratorns were vulture-like birds with a strict scavenger or raptorial behavior was based on the presence of a sharply hooked beak, their comparable body size and superficial similarity to the condors in limb proportions and morphology, as well as its frequent associated finding with cathartids and other large carnivorous birds.” “However, the relatively weak legs and claws observed in teratorns are not consistent with raptorlike features, and the distinctive morphology of the pectoral and pelvic girdles, skull and jaws appear to be incompatible with vulture-like ecology.” (An image of what the teratorn would have looked like can be seen here.)

Their study was published in the Journal of Vertebrate Paleontology where it can be read in full.