A popular sketch on The Late Show with David Letterman was “Is This Anything?”, where the host and the bandleader Paul Shaffer watched an individual or group perform an unusual stunt, then discussed whether the act was "something" or "nothing." Archeologists excavating artifacts often seem to engage in a similar game as they attempt to figure out what is historically or monetarily valuable and what is just old stuff. A good example of this ‘game’ took place recently on the Tibetan Plateau with the discovery of hand and footprints on a wall that date back to the middle of the Pleistocene era, between 169,000 and 226,000 years ago. That's significant, but it becomes game-changing as archeologists play a game that might be called, ‘Is This Art’? The answer could determine of this is the oldest artwork ever found or just cave kids having fun.

"The question is: What does this mean? How do we interpret these prints? They're clearly not accidentally placed. There's not a utilitarian explanation for these. So what are they? My angle was, can we think of these as an artistic behavior, a creative behavior, something distinctly human. The interesting side of this is that it's so early."

Thomas Urban, research scientist in the College of Arts and Sciences at Cornell and co-author of the paper, "Earliest Parietal Art: Hominin Hand and Foot Traces from the Middle Pleistocene of Tibet," published in Science Bulletin, tells Phys.org about his analysis of five footprints and five handprints found on a rocky promontory at Quesang on the Tibetan Plateau in 2018. The prints were found in travertine, a freshwater limestone that was soft when they were made but hardened over time. While footprints are common, handprints are rare, and Urban suspected these were examples of parietal (immobile) art similar to hand stenciling often found on prehistoric cave walls – and the children who made them had a purpose in mind. (Photos here.)

"These young kids saw this medium and intentionally altered it. We can only speculate beyond that. This could be a kind of performance, a live show, like, somebody says, 'hey, look at me, I've made my handprints over these footprints.'" 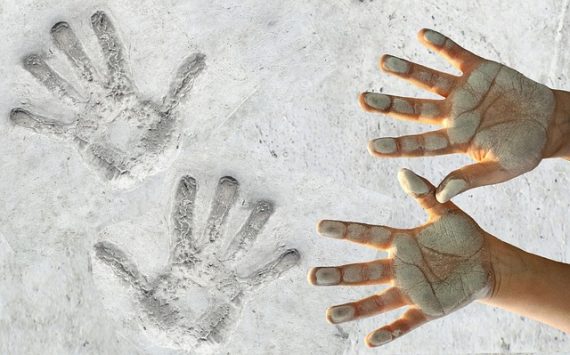 The oldest confirmed examples of prehistoric art are found on the Indonesian island of Sulawesi and in the El Castillo cave in Spain and date to between 40,000 and 45,000 years ago. The famous Chauvet cave paintings in France are 30,000 years old. If the Tibetan hand and footprints are deemed to be real works of art, their age of 169,000 to 226,000 years almost pushes the others into the Museum of Modern Art, not the Museum of Natural History. Once that question is decided, an even bigger one looms. Study co-authors Matthew Bennett, Professor of Environmental and Geographical Sciences at Bournemouth University, and Sally Reynolds, Principal Academic in Hominin Palaeoecology at Bournemouth University, ask it in The Conversation:

“Were the children members of our own species, Homo sapiens, or members of another extinct archaic human species? There is nothing in the tracks to resolve this question. They may have been an enigmatic group of archaic humans referred to as the Denisovans, given other recent skeletal finds of this species on the plateau.”

As we learn more about the Denisovans, the Neanderthals and other potential archaic humans, we find more reasons to consider them as peers rather than less intelligent – and artistic -- hominins.

It may have started 226,000 years ago, but there’s still a need for art in our modern world. Teach art in schools again!

The Most Complicated UFO Case Ever? Maybe, Maybe Not…