Several new photos taken at Concordia Cemetery in El Paso, Texas, appear to show some paranormal activity. The pictures seem to show a dark shadow as well as bright orbs of light.

Concordia Cemetery is allegedly very haunted which isn’t surprising as there are more than 60,000 people buried there since the 1850s. It is said that Satanists go there to conduct their evil rituals – specifically because the cemetery has connections with Richard Ramirez, better known as the Night Stalker. When Ramirez was younger, he would sneak out of his house and go to Concordia Cemetery. As he got older, he became interested in Satanism and he would go to the cemetery to conduct rituals. There has even been evidence of “brujera” being performed there as well (this is Mexican witchcraft). 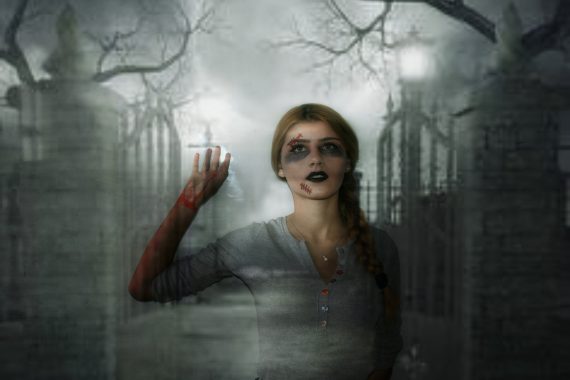 A lot of the paranormal activity occurs at night. There is a creepy dark shadowy figure that is often seen and has even been captured in photographs (these include some of the recent pictures). Other ghosts that have been spotted at the cemetery include the “Lady in White” (or Lady Flo) and the Old West gunslinger John Wesley Hardin. As a matter of fact, because of grave robbers and tourists, a metal cage had to be built around Mr. Hardin’s grave; however, his cranky ghost is still said to roam around the cemetery.

Other unexplained events include hearing the sounds of children laughing and playing; the hooves of trotting horses; and soldiers who are in battle. Women who have had C-section births have felt pain in their scar area when walking through the children’s section of the cemetery. There is a specific area of the graveyard that is nicknamed “The Vortex” where people have been inexplicably “pulled” towards.

As for the recent photos, they were all taken at the cemetery during a ghost tour that was hosted by the Paso Del Norte Paranormal Society. And in several of the pictures, a dark unexplained figure can be seen lurking around different areas.

The fact that several ghostly photos were taken at Concordia Cemetery isn’t surprising as it just adds to the long creepy history of unexplained activity.