Following on from my previous article on journalist Dorothy Kilgallen - on an alleged crashed UFO and a crew of dead aliens said to have been found in in the U.K. during the Second World War - I thought I would share with you a couple more very weird stories from that same time-frame. Declassified U.K. military papers tell an incredible story. The documentation goes under the title of  "Report by the Crew of 61 Sqdn. A/c 'J,' Captain W/O Lever, of object seen during raid on TURIN, night of November 28/29th, 1942." That's a pretty big title! Nevertheless, it gets to the point of the incident. A report prepared for Bomber Command included these words: "Herewith a copy of a report received from a crew of a Lancaster [aircraft] after a raid on Turin. The crew refuses to be shaken in their story in the face of the usual banter and ridicule." Now, let us get to the heart of the story that can be found in the National Archives, U.K. Along with more tales of strange, aerial objects, I should stress. With that said, back to the content of the document:

"The object referred to above was seen by the entire crew of the above aircraft. They believe it to have been 200-300 feet in length and its width is estimated at 1/5th or 1/6th of its length. The speed was estimated at 500 m.p.h., and it had four pairs of red lights spaced at equal distances along its body. These lights did not appear in any way like exhaust flames; no trace was seen. The object kept a level course. The crew saw the object twice during the raid, and brief details are given below: (i) After bombing, time 2240 hours, a/c height 11,000 feet. The aircraft at this time was some 10/15 miles south-west of Turin traveling in a north-westerly direction. The object was traveling south-east at the same height or slightly below the aircraft. (ii) After bombing, time 2245 hours, a/c height 14,000 feet. The aircraft was approaching the Alps when the object was seen again traveling west-south-west up a valley in the Alps below the level of the peaks. The lights appeared to go out and the object disappeared from view." The documentation reveals this, too: "The Captain of the aircraft also reports that he has seen a similar object about three months ago north of Amsterdam. In this instance it appeared to be on the ground and later traveling at high speed at a lower level than the heights given above along the coast for about two seconds; the lights then went out for the same period of time and came on again, and the object was still seen to be traveling in the same direction." 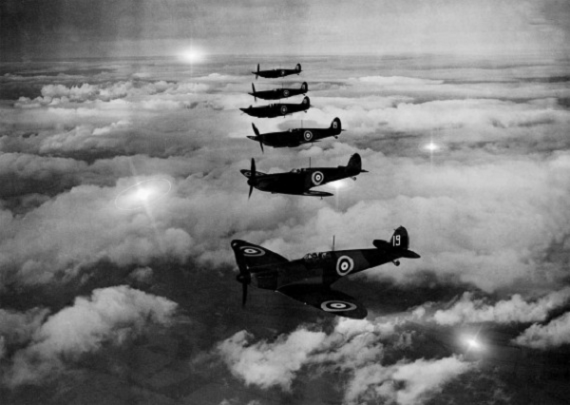 Whatever this immense craft was, it was never identified. Now, let's take a look at another bizarre case from the Second World War. It begins as follows: "From the latter part of the Second World War (the exact date is missing) comes the following from the in-house newsletter of the British Royal Air Force’s, 115 Squadron: "Under this heading there occur from time to time reports of weird and wonderful apparitions seen during our (and the American) attacks on Germany. We have asked our local Inner Circle bloke to comment on the latest species of wizardry. Here is his story…believe it or not." The paperwork becomes somewhat amusing: "On the 11th December the Yanks paid one of their daylight visits to Emden. Visibility was good and the weather clear. An unidentified object was seen in the target area. It was about the size of a Thunderbolt and passed 50 – 75 yards beneath the formation.

"It flew straight and level (No chaps it was not a Lanc. gone mad…) at a terrific speed, leaving a streak like a vapour trail which remained visible for a long time. The object passed so quickly that the observer could not determine it more accurately. Suggestions will be welcome…serious ones…as to what this Loch Ness Monster of Emden might have been. (Prize… one year’s free issue of this News Sheet…if the publication survives as long.) Another of the attacking aircraft was hit by a length of wire which bit deeply into the nose. Twenty feet were coiled around the nose and something caused the bomb door to open. The wire may have been towed behind a fighter which had just made an attack upon the bomber; some form of explosive charge or weight may have been attached to a parachute fired from a rocket projectile, though no parachute was seen. An examination of the wire is taking place and it is hoped that this will shed some light on the occurrence. In another attack, this time on Bremen, there were many reports of ‘silver and red discs above the formations [italics mine].’ These have been seen before but up to now no-one has been able to decide their purpose. Suggestions please." Neither case was ever solved. 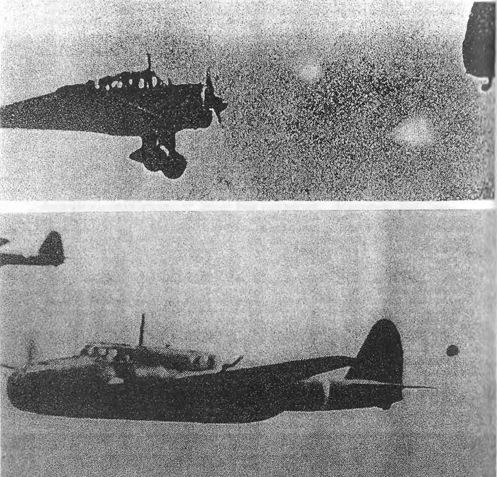