Strange Tales of Sea Monsters and Dragons at Filey Brigg

Located along the northern coast of England, near Filey, North Yorkshire, is a rocky peninsula that juts out into the grey sea and is known as Filey Brigg. The steep sandstone and limestone cliffs here offer a spectacular vista of the surrounding area, and this place is rich in history, biology, and geology, placing it among the list of Sites of Special Scientific Interest in North Yorkshire. It is also a place steeped in myth and magic, with numerous legends associated with it, including that it was created by the Devil to cause shipwrecks and that his handprint can still be seen here. Yet while this is an obvious myth, Filey Brigg has long been believed to be a haunt for dragons and sea monsters, with many tales to be found here that run the range between fanciful to plausible.

One story that has long orbited Filey Brigg since the Middle Ages is that there once dwelled here a dragon in a tidal inlet known as the Gully. The dragon was said to be very fierce and mighty, but it had a weakness, which was cake, sticky cake to be exact. The dragon could apparently not get enough of it, and villagers would often use sticky cake to lure the beast away, although it always came back. It was finally defeated, with several versions of the tale. According to local historian Kath Wilkie, one story concerning the death of dragon is that one day the dragon was lured away by the villagers and on this occasion its jaws got stuck together from all of the cake, after which they took this opportunity to kill it. Another tale says that the wife of a local man named Ralph Parkin fed the dragon too much cake and it basically died by overeating and falling into the sea, with the sticky Yorkshire cake called Parkin being named after her. Yet another version is that a tailor named Billy Biter slayed the dragon and that its skeleton formed part of Filey Brigg.

These sound very much like pure myth, but they could perhaps be rooted in some grain of truth, as Ralph Parkin and his wife Mary were real people and the area has long been said to be prowled by sea monsters, with numerous accounts from fishermen and locals seeing them, and although this is just perhaps a spooky old campfire story, there have been modern accounts that have made the news. In 1934, at just about the same time that stories of the Loch Ness monster were starting to become more mainstream, there also came in a series of account of the “Filey Brigg Dragon.” One report in the Dundee Evening Telegraph would read:

There was excitement in Filey today when it was reported either that the Loch Monster had found its way to the Yorkshire coast or that Filey had developed a monster of its own. This morning a stroller along Filey near Scarborough reported that had seen a huge body with numerous humps and small head a short way out to sea. A search covering Filey Brigg and North Bay proved fruitless.

The article then explains that the creature was nothing more than dolphins moving in a line, but some witnesses would dispute this. In another case, fishermen in the area reported that a large creature with humps, a long neck with a seal-like head, and “eyes like saucers” was lurking around, creeping people out and stealing fish off of their lines and tearing the lines clear off of the buoys, sometimes even dragging the buoys around. One report on the sightings in the Daily Telegraph would say of one such sighting:

When fishermen told us a fortnight ago in Filey that they had seen a monster of an unclassified but awe-inspiring species about three miles out to sea, we were skeptical. The fishermen, perhaps discouraged, said no more, and we concluded that the monster had gone off to the same retreat as its Loch Ness relative.

There would later be a very large seal that was killed in the same area, and for many this solved the mystery. Others said it was just misidentified porpoises or dolphins, but again, some witnesses insisted that it had been no normal seal. One article in the Nottingham Evening Post would say of this:

A Cleethorpes fisherman who says he has been fishing here for 51 years, and that he knows seals and porpoises well enough, refused to believe, before the news of the Bridlington catch, that the monster that has been robbing fishermen's lines Cleethorpes is a giant seal is Mr. William Croft, and he said that what he and his two sons saw would be six or seven feet in the water, with a head like Great Dane. He added: it appeared to have ears and mane. Its neck was longer than a seal's, and its head was set differently. “We saw the best part of two feet of head and neck above the water, and it was distant only 50 yards so. I should judge the creature to be eight feet long. 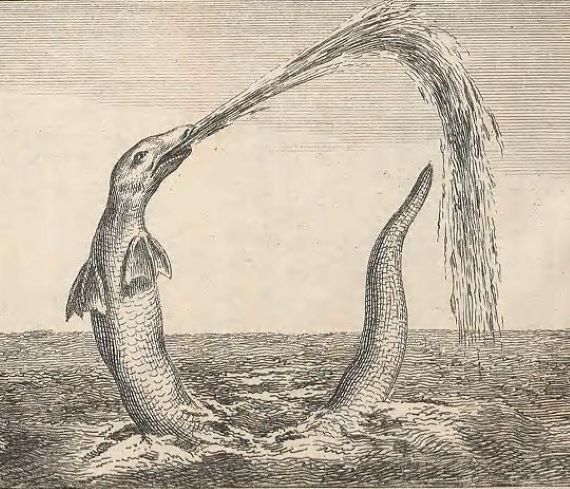 Also from 1934 was a report from a local coast guard by the name of Wilkinson Herbert, who was on the beach at Filey Brigg when he came across something very strange. The case was covered by cryptozoologist Bernard Heuvelmans in his book In the Wake of Sea Serpents, and the witness would say of his dramatic and harrowing encounter:

Suddenly I heard a growling like a dozen dogs ahead, walking nearer I switched on my torch and was confronted by a huge neck, six yards in front of me, rearing up 8ft. high! The head was a startling sight- huge eyes like saucers, glaring at me, the creature’s mouth was a foot wide and neck would be a yard around. The monster appeared as startled as I was. Shining my torch along the ground I saw a body about 30ft. long. I thought this was no place for me and from a distance I threw stones at the creature. It moved away growling fiercely and I saw the huge black body had two humps on it and four short legs with huge flappers on them. I could not see any tail. It moved quickly, rolling from side to side, and went into the sea. From the cliff top I looked down and saw two eyes like torch lights shining out to sea 300 yards away. It was a most gruesome and thrilling experience. I have seen big animals abroad, but nothing like this.

What was this creature, and perhaps more importantly, why in the world would he throw stones at it? We will probably never know. With all of these modern cases it is quite likely that these were out of place sea lions or some misidentified known marine mammals, but considering some of the descriptions it seems possible that there is more to this. It is also intriguing that these accounts have come out of an area known for its legends and myths of dragons, so is it possible that a real unidentified sea monster could have been the basis of those tales? It is hard to say, but it is certainly all very intriguing, and a curious melding of modern mystery and myth.

When Strange Creatures and Even Stranger Orbs of Mysterious Light Appear