The 9/ 11 Tragedy and the Mysterious Vanishing of Dr. Sneha Philip

Originally from the Indian state of Kerala, 31-year-old Sneha Philip would later move with her family to New York City, where she graduated from Johns Hopkins University and enrolled in the Chicago School of Medicine in 1995. She would go on to become a physician, and in 2001 her life was going pretty well. She had a bright future ahead of her, lived with her husband Ron Lieberman in a nice apartment at Battery Park City, and the two were by all accounts very happy. There would have been very little reason to have suspected that dark clouds were gathering for her, but she was about to become a strange unsolved mystery overshadowed by the terrorist attacks of 9/11.

September 10th, 2001 started like any other day for Sneha. She kissed her husband goodbye when he went to his work as an emergency-room intern, played with her kittens, tidied up her apartment, and potted some purple and white orchids she had just received from Hawaii. She then had a two-hour instant messaging conversation with her mother between 2 and 4pm, and after that she got ready to go out and do some shopping and drop off some dry cleaning. She was seen at a discount department store called Century 21, just a few blocks away from their apartment, where she bought lingerie, a dress, panty hose, linens, and three pairs of shoes on her credit card. After this, she left the store to go walking out onto the street, and it seems she also kept walking right off the face of the earth.

Her husband Ron would return to their home at around midnight to find that his wife was not there. This was not yet particularly strange, as Sneha would sometimes stay over at her brother’s place just a couple of blocks away, although it was slightly odd that she did not let him know that she was doing this. Nevertheless, he wasn’t alarmed at this point. Even when the next day came and she hadn’t come home, Ron was a bit annoyed but still convinced she had just crashed at her brother’s place, and so he went off to work without thinking much of it. That day, September 11, he went to work as usual and at 9 a.m. and although he called his apartment to leave messages on their answering machine for Sneha, she never called back, making him lament the fact that she did not have a cell phone. At this point he still wasn’t particularly worried, but that would soon change, as the day was about to unfold into chaos as one of the worst terrorist attacks in history loomed over the horizon.

While Ron was on a break that morning, he and some colleagues were called to the TV, where they all gathered around to watch a terrifying and surreal scene unfold. There they watched in horror as the planes smashed into the World Trade Center and gasped as the buildings subsequently crashed to the ground in plumes of dust and smoke, taking thousands of people to their deaths and changing the world forever. Throughout this grim spectacle, Ron called his apartment again and again, which was only a few blocks from the World Trade Center, and again Sneha did not answer any of these calls. He also called her brother and her mother and it would turn out that none of them had seen her, and that she had never stayed over at her brother’s apartment. He was now very concerned, but took solace in the fact that Sneha would have had no reason to be in either of the two towers, helping him to keep his composure. As his mind raced through possible scenarios for what had happened to her, he decided to penetrate into the chaos downtown in an effort to try to look for her, and the next chapter of the strange tale would begin.

Ron was not able to track his wife down, and she was not at their apartment, which had had the windows open and was coated with a frosting of dust from the attacks like a scene from some surreal nightmare. Indeed, there was no trace of where she had gone, none of her family or friends would turn out to have been with her that night, her mother had gotten no new messages from her, and at this point he was freaking out. The already taxed authorities were not much help at the time, so a private investigator was notified, and they were able to glean some hints from the mysterious vanishing. Surveillance video showed Sneha at the department store with her merchandise, looking completely happy and normal, and a clerk claimed that she had been with another Indian woman, although this woman is not seen in any of the tapes and this alleged friend has never been identified. The bags she had been carrying in the surveillance footage were not found at the apartment, suggesting that she had never returned there at any point. So where had she gone? No one knew. 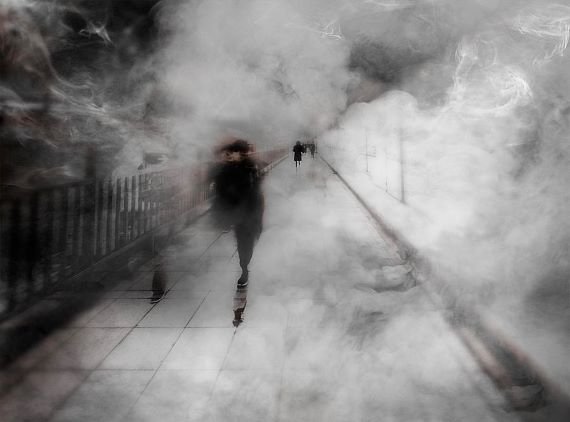 In the meantime, flyers were posted all over the city, but with so many dead and missing from the 9/11 attacks these got lost in a sea of similar flyers for countless others. Further investigations would turn up some rather ominous clues. There were hints that Sneha and Ron’s marriage wasn’t as peachy as everyone had been led to believe, with evidence of marital woes, fights, and alcohol abuse by her, all denied by Ron. Making it even murkier was that Sneha‘s brother would later claim that he had heard from her during the terrorist attacks, and that she had been helping the wounded, claims which have proven to be dubious. Adding to the intrigue is a piece of surveillance footage at the apartment complex, which shows a woman who looks very much like Sneha in the lobby at 8:43AM, just three minutes before American Airlines Flight 11 was flown into the North Tower. It has never been proven if it was her or not. Her family thought at the time that she had perhaps leapt into action after the disaster to help those in need, and had then perished, but others are not so sure. In the meantime, although she was not at first officially listed as one of the victims, her family would push for them to include her on it. There was speculation by authorities at this time that she had been leading a double life, and had perhaps chosen to run off, but this has never been proven. Indeed, a Surrogate's Court judge denied her family's petition to have her declared a victim of the attacks.

There was then talk that she had been the victim of foul play or had run off, before a New York State appeals court overturned a lower-court ruling and declared that Philip had been a victim of the attacks, despite the fact that there is no body and little evidence to that effect. What is going on here? Was she a victim of the attacks or not? The official stance at the moment is that she was, but this can’t be said for sure, with no concrete evidence that her disappearance had anything to do with the 9/11 attacks beyond creepy coincidence. She has not been positively placed at the towers that morning, and no trace of her has ever been found, so what happened to her? Where was she on the night of September 10? Was she the victim of those terrorist attacks, foul play, or something else? The debate continues, and for many it is far from over. However, without a body there is no definitive answer, and whether this was due to the attacks, the desire to start a new life, or something even more sinister will likely forever remain unresolved.

The Strangest, Supernatural “Family” of All: Black Eyes and Black Suits