The Cold War, USOs, and the Mystery of the K-219 Submarine Incident

In October of 1986, the Soviet Navaga-class ballistic missile submarine K-219 was prowling through the waters of the North Atlantic, about 1,090 kilometers (680 mi) northeast of Bermuda, on a routine nuclear deterrence patrol. At the time the Cold War was in full swing, and this was pretty normal procedure for the era, basically lurking about to let the enemy know you were there, and since the K-219 was equipped with between 32 to 48 nuclear warheads and 16 R-27U liquid-fuel missiles, you can be sure that the Americans got the message loud and clear. At around 0530 Moscow time, seawater began inexplicably leaking into missile silo six, and not long after this chaos would erupt aboard the K-219 and turn into a great mystery that has become part of the lore of the Bermuda Triangle.

As the leak continued, efforts were made to fix the situation, the alarm was sounded, and measures were made, which included hermetically sealing all compartments. However, it was too late. At 0538, an explosion occurred in missile tube No. 6, killing two men outright and a third when toxic fumes suffocated him, and it also ejected the missile and its warheads into the sea. Another man died while trying to shut off the submarine’s engine reactor, which had oddly not turned off automatically, and the disaster would in the end claim five lives. K-219 was able to limp to the surface, where it was found that the side of the vessel had a deep groove, as if it had struck something underwater, and K-219’s Captain Second Rank Igor Britanov believed that it could have been the reason for the leak that had led to the explosion. The only problem was, they were in the middle of nowhere, and had not received any collision alarm, so what was going on here? The K-219’s problems only continued from there.

Considering that the sub was basically dead in the water, it was towed by a Soviet freighter back towards their home port of Gadzhiyevo, a full 7,000 kilometers (4,300 mi) away, but the tow line broke, and the order was given to abandon ship. The surviving crew were rescued and the metal behemoth sank down to the bottom of the Hatteras Abyssal Plain, coming to rest at a depth of about 6,000 m (18,000 ft) in dark, freezing waters and taking its full payload of nuclear warheads with it. Oddly, when an operation was later launched to investigate the wreck, it was found that all of the warheads were nowhere to be found and the silo hatches were dangling open. Considering the loss of life, the sub, and the warheads, it was a pretty big deal, and there were immediately accusations flying as to what had caused the leak and explosion.

The Soviets were very quick to lay the blame on the Americans. Their official stance was that the K-219 had collided with the American submarine USS Augusta, which was operating in the same general region at the time. However, both the captain of the USS Augusta and the captain of the K-219 denied this, and it was also found that the American sub was nowhere near them at the time of the incident. In fact, no U.S. sub had been anywhere near them, and no American vessel had come in for repairs for any such underwater collision. So what had caused that gash on the sub? How had there been a leak in the silo, where such a thing should have been impossible? The Soviets would continue to hang onto the theory that it had to have been a collision with an American submarine, and they fully charged Britanov with negligence, sabotage, and treason, although these charges were eventually dismissed. For years the incident aboard the K-219 was a mystery often debated and discussed, and considering its proximity to the infamous Bermuda Triangle at the time, you can be sure that of course some began turning to speculation taking us into the world of the weird. 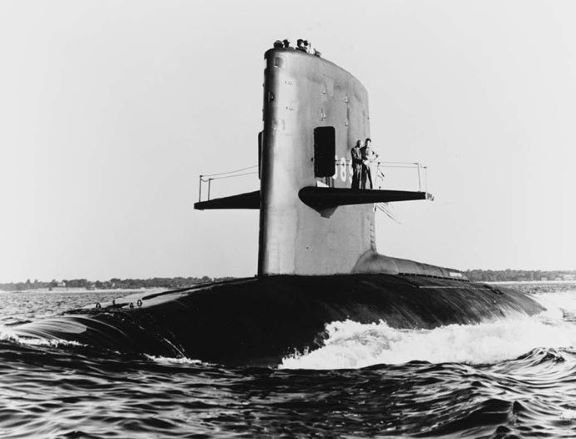 The main idea here is that it was, well, aliens. There would be numerous uncorroborated and unverified claims that subs and other vessels in the area had seen mysterious lights zipping about underwater, often called Unidentified Submerged Objects, or USOs, as well as a strange low frequency sound picked up on equipment that sounded like a quacking duck or a low croaking. Appropriately called “Quakers,” these sounds have been speculated as being anything from misidentified whale song, to some sort of top-secret sonar system, to some geological phenomenon, to alien transmissions, and apparently the K-219 picked up these sounds as well shortly before its accident. In 2010, a former Russian naval officer, a Captain Nikolai Tushin, came forward with a new piece of testimony in the incident. According to him, at the time of the incident, Tushin was part of a group of specialists of the Soviet Navy tasked with the admission of nuclear submarines built in Severodvinsk at Sevmash to the fleet, and so he had his finger on the pulse of pretty much everything that happened with the submarines, including every accident and incident. According to him, the K-219 had picked up not only one of the unidentified Quaker noises, but had also tracked a mysterious moving underwater object on its radar. He had allegedly kept this information classified for decades, but came forward with it when he figured that there would be no repercussions. He would speak to Russian researcher Dmitry Sudakov, who would say of all of this on the site Pravda:

Nikolai had no doubts that the underwater object that collided with the strategic submarine “K-219” carrying two nuclear reactors and 16 ballistic nuclear missiles was not man made. Incidentally, he was the one to tell me about the troubles endured by Soviet (as well as American, British, and French) atomic submarines from the so-called “Quakers.” He said that experienced sailors were quite serious about the talks of underwater unidentified objects. According to Tushin, he, like many other submarine commanders, saw glowing balls and cylinders in the ocean. Almost every diver has a “cherished” story. It was not customary to talk about it, and no instruments recorded sightings of such objects. Even now little is known about these croaking invisible objects. They were first heard a few decades ago, when more or less sensitive sonar equipment that could hear the ocean in many sectors of sonar range appeared on submarines, especially nuclear ones.

The range of “Quakers” action expanded from the Barents Sea to the Mid-Atlantic, including the Bermuda Triangle, where Russian atomic submarine “K-219” has perished. The theory of the man-made origin of the mysterious underwater object sounds rather weak because even the wealthy United States could not afford such costs. These mysterious objects persistently pursued Russian (and not only Russian) submarines, and the chase was accompanied by characteristic acoustic signals resembling croaking of frogs. According to Tushin, sometimes submarines thought that the mysterious objects were displaying friendliness.

The famous atomic experienced diver, admitted to the controls of nearly all projects of the Soviet nuclear submarines, admitted that we might be dealing with some unknown underwater civilization. Indeed, the underwater world is explored much less than space. Those who thought of the unidentified objects as the reason of the accident were afraid to speak up not to be considered insane. Tushin was convinced that “К-219” was sunk by a mysterious force, but at the time could not admit it out loud. The unidentified floating objects remain a mystery of the ocean.

What was going on here? Is there any truth to this at all? As of now, the whole incident has been sort of brushed over and forgotten, with many ideas put forward. Was this just a technical malfunction, a collision with an American sub, sabotage, or something else, perhaps something more otherworldly? By the way, where did the nukes go? Do you have them? I know I don't, but I sure wish I knew who did. It is a rather obscure account from the Cold War era to be sure, and the answers have not been coming in. Perhaps time will tell.