The Mysterious Cursed Wreck of the Andrea Doria

Back in its day, the SS Andrea Doria was a source of pride for its native country of Italy. Ported in Genoa and launched in 1951, it was a 697-foot luxury ocean liner that was decked out with all of the frills, including three outdoor swimming pools, and was widely known for its numerous works of art, such as paintings, tapestries, murals, and even a life-sized bronze statue of the ship’s namesake, the 16th-century Genoese admiral Andrea Doria. Such magnificent art was so ubiquitous on the ship that it earned the vessel the nickname “The Floating Art Gallery,” and at a time when Italy was trying to rebuild in the aftermath of World War II the SS Andrea Doria was a source of national pride and symbol of renewal, being the largest, fastest, and most opulent in the entire country, complete with the most state-of-the-art technology and safety features available at the time. However, there were dark days ahead for the venerable vessel, and it would go on to become one of the biggest sea tragedies in the world, as well as a place rumored to hold dark forces and curses about it to this day.

On 25 July 1956, the Andrea Doria was on a routine run towards New York City, along with 572 crewmembers and 1,134 passengers. By this point, the liner already had an admirable service record, having made 100 successful transatlantic crossings, and was under the command of Captain Piero Calamai, a seasoned veteran of both World War I and World War II, so there wasn’t at the time any reason to think that this voyage would be any different. On this day, at around 10:30 a.m., the Andrea Doria was being approached from the opposite direction by the Swedish liner the Stockholm, and both vessels were traveling a bit too fast and recklessly for the foggy conditions in such a heavily trafficked sea lane, both trying to shave off time from their voyages to reach their destinations on time. At some point the two vessels became aware of each other on radar, but through some misunderstanding or error, the Andrea Doria steered towards the incoming Stockholm rather than away from it, sending them on a collision course.

By the time they figured out the error, it was too late. The Andrea Doria and the Stockholm collided practically head-on, despite all efforts to evade at the last second. The Stockholm had been fitted with a robust ice-breaker bow that easily shredded right through the other vessel and mortally wounded it to leave a huge gaping gash and mess of twisted metal. The Andrea Doria began to list immediately, leaving half of its lifeboats underwater before the shocked crew and passengers had really even had time to process what had happened, Fortunately, the ship managed to stay afloat for 11 hours, which combined with the high traffic of the area, high-tech safety features, and top-of-the-line communications systems ensured that the rescue went as smoothly as could be expected. Nevertheless, 46 people met their fate aboard the Andrea Doria that day, as well as 5 aboard the Stockholm, mostly killed on the initial collision, and it would go on to became one of the most infamous maritime disasters of all time. The Stockholm would survive the ordeal and go onto be repaired and put into operation, but the Andrea Doria was lost, eventually going into its death throes to slip beneath the waves and come to rest in the murky depths in around 240 feet of water about 60 nautical miles from Nantucket on the border of the continental shelf, practically teetering on the edge of an abyss. No official blame or cause of the collision was ever established, but the Andrea Doria would become well-known for other mysteries as well.

In the years after its sinking, the Andrea Doria became a very popular destination for divers, with its remote location, deep cold waters, strong currents, and the promise of treasures and historical artifacts proving to be an irresistible challenge for many, with anything found able to be kept due to the ship’s location in international waters and the fact that the owner of the shipwreck has never enforced its salvage rights over the wreck. The wreck has often been dubbed “The Mt. Everest of Wreck Diving,” and this seductive allure has drawn in divers from around the world looking to feed their egos and their pocket books, but the wreck has also gone on to be whispered about as a cursed place that swallows up all who would approach it. 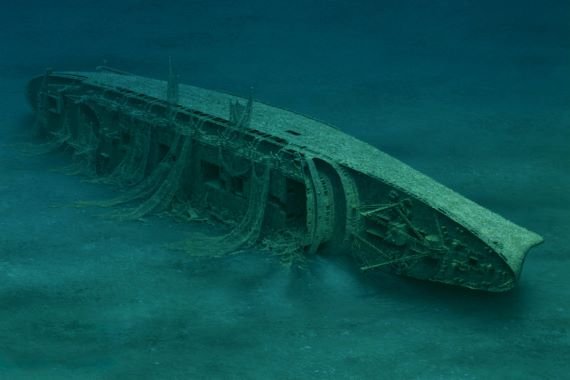 The rumors stem from the fact that many who come here to investigate the wreck have been beset with numerous technical issues, freak accidents, or worse. Bad diving conditions and weather have supposedly suddenly descended on the area during dives, and faulty equipment and getting stuck in the deteriorating compartments of the ship itself have managed to cancel many dives, and it has even resulted in death. Indeed, the Andrea Doria has a rather sinister reputation for taking lives, with an estimated 18 people losing their lives here since 1956 while trying to explore the wreck. One some occasions, people have just straight up vanished, such as expert diver Tom Pritchard, who mysteriously disappeared while trying to explore the Andrea Doria in 2015. Such a high rate of deaths have caused speculation that there is some sort of sinister force pervading the wreck, but most experts have explained it as being merely the result of the dangers inherit to such a remote and difficult dive. Diver Steve Bielenda, who has made many excursions out to the wreck, explains of this:

It’s an inanimate object. It does nothing to you. It’s the diver — the equipment, what they do, and their health. It’s not really any more dangerous than any other wreck. It’s just an inanimate object laying on the bottom of the ocean. But any dive, regardless of its depth or location, can be dangerous. The wreck becomes dangerous because of its depth and the attitude of the diver. And then factor in health issues, and then factor in that you’re dependent upon equipment. You have to work your way in, keeping your buoyancy so you’re not touching the bottom or the walls and everything. The wreck is falling apart. It’s an underwater junk pile. And then take that underwater junk pile and cover it with sea anemones, dirt, and marine growth. So it’s like an underwater garbage pail that you’re diving into. It’s eventually going to be undriveable.

The depths involved and the cold dark conditions also mean that even expert divers with the best equipment only have a small window within which to operate, with a typical Andrea Doria dive only lasting around 15 minutes. During these forays, they have to utilize strobe lights on the moorings in order to help them find their way out, as well as hook lines fastened to themselves. Many of the divers who have died here did so when their lines got tangled, or when they got lost in the labyrinthine interior of the ship or panicked and lost their mouthpieces. There are a million things that can go wrong at a wreck like this, so it is likely that this is just a dangerous wreck that has attracted stories of curses due to its rather tragic history. Is it cursed? Who knows? It is likely just a largely unreachable wreck attracting a spooky lore around it, but it is still a rather fascinating glimpse into history and a wreck that had become notoriously difficult to safely approach.

Evidence of a Prehistoric Clothing Production Site in a Moroccan Cave