The Mysterious Tale of the Lambton Worm

At times the worlds of myth, legend, and cryptozoology seems to meld together and collide, with many mysterious beasts of the world having their roots in strange stories of yore and local mythology. Our strange tale here begins in the 14th century, in the County Durham in north-east England. It was at the time a rural hamlet, and one Sunday morning an heir of the Lambton Estate, County Durham, by the name of John Lambton went out to have a day of fishing at the River Wear. Unfortunately, he had skipped mass to have his little day out, but he did not think much of this at the time, even when a passing old man pointed at him and proclaimed that he would not get a good catch after skipping church services. Lambton sort of brushed it off and found a nice, quaint spot by the river where he cast his line in and enjoyed the peaceful serenity of the area. And so would begin a prominent tale of folklore that may or may not have any basis in reality.

Many hours passed with not a single bite from a fish, to the point where the young man was starting to think that the old man had been right all along, but then his pole was yanked practically out of his hands. Whatever was on the other end of the line was apparently absolutely ferocious, putting up such an epic battle that Lambton was convinced that this had to be a truly enormous fish. However, when he finally managed to drag it to shore, he found that it was no fish at all, but rather a writhing eel-like creature with ebony black, slimy skin, a head like a salamander, a maw filled with sharp, needle-like teeth, and nine tiny holes along each side of its mouth. The squirming abomination was quite small, belying the strength with which it had fought, and it was such an unpleasant sight that Lambton was about to kick it back into the water when the same old man who had admonished him earlier for skipping church curiously approached him. 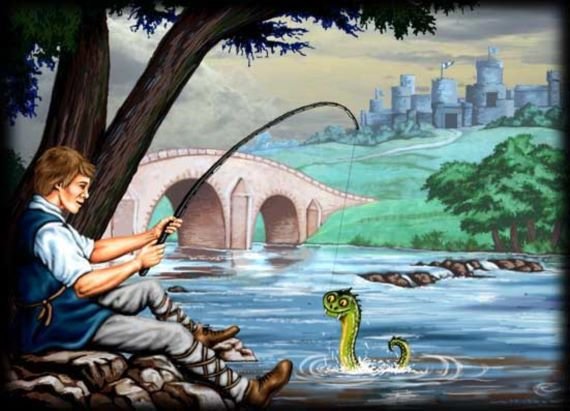 The man asked what he had caught, and when he was shown the glistening, writhing toothed beast he immediately made the sign of the cross and told Lambton that he had “caught the Devil,” and that he was not to release it back into the river no matter what. The young man decided to stuff the creature into his basket and bring it back to his village, but he was so disgusted by the thing that he ended up tossing it into an old well on his way home. After that, he pretty much forgot about the vile little creature, and eventually went off to fight in the Crusades. It was during this time that something would be found to be very off about that well. Locals began to report that it exuded a noxious, repugnant stench, and that the water from its depths was poisoned, and not long after this something began killing livestock in the area and oddly stealing milk from cows, before getting even bolder.

Locals began to tell of an enormous serpent-like creature with sleek black skin and an enormous maw filled with fangs, which would start snatching away babies and young children before graduating to adults. The story goes that at one point the creature was sedated and imprisoned in Lambton Castle, but it would soon escape. At one point, a mob of villagers purportedly went out into the wilderness to hunt the beast down, only to disappear and later be found strewn about the trees torn limb from limb. The same would happen to knights passing through, who tried to test their battle skills on it to slay the beast but failed. All sorts of legends sprang up around this time, such as that it could regenerate missing parts or even reattach them, and that it could uproot trees to use as weapons to batter its enemies. The size in later accounts vary wildly, with some saying it was around 16 feet long and others claiming it was big enough to wrap around a hill.

Lambton himself was not aware of any of this until he returned from the Crusades years later to find the area nearly in ruins and populated by people who cowered in their homes in the murk, afraid to go outside. He then decided that he had to vanquish the creature, and sought out the advice of a witch living in the area. The witch gave him the advice of covering his armor with spearheads and confronting it in its own lair at the River Wear, but she also warned him that this was a creature not of this earth, and that after slaying it he must kill the first living thing he sees or his family would suffer a nefarious curse for nine generations. He made arrangements with his elderly father to release a hunting dog upon hearing his horn blared three times, which would be his sign that the creature was dead. The idea was that the hunting dog would run there and could be killed to avoid the curse, but things would not go according to plan. 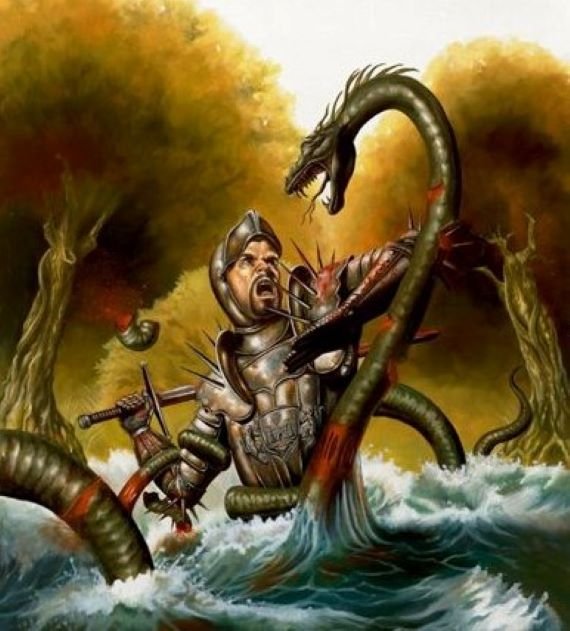 As Lambton approached the river lair of what would go on to be known as the “Lambton Worm,” he was ambushed and wrapped in its coils, but fortunately for him his special spear-tipped armor weakened the creature, after which he was able to dispatch it with his sword. So far, so good, but when he sounded his horn, his father was so overjoyed that the monster was dead that he failed to release the dog, and ran out to congratulate his son. Lambton would then be horrified to see his own father there instead of the dog he had expected, and instead of killing him resigned himself to the curse, which would hang over the family for generations to supposedly cause all manner of misfortune and premature deaths.

Although this may sound like pure legend and folklore, it has been suggested that some of it could be based on some grain of truth, such as some large exotic snake or undiscovered species of reptile, and making it even more curious is that there were other reports of such beasts throughout the ages, often called Wyrms and very similar in appearance to the Lambton Worm, inhabiting the same region. Indeed, there is a report of such a creature from the very same area in the 16th century, with an entry in the parish register of the St. Nicholas Church in Durham city reading:

A certaine Italian brought into the Cittie of Durham the 11th Day of Iune in the yeare aboue sayd A very greate, strange & monstrous serpent in length sixxteene feete, In quantitie of Dimentions greater than a great horse. Which was taken & killed by speciall pollicie in Æthiopia within the Turke’s dominions. But before it was killed, It had deuoured (as it is credibly thought) more than 1000 persons And also destroyed a whole Countrey. 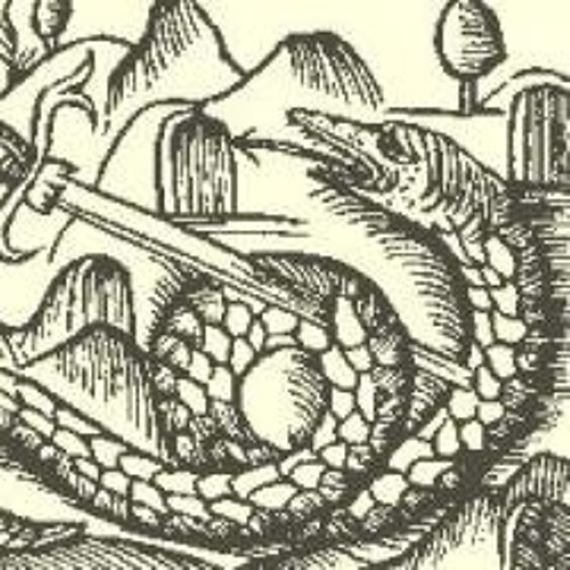 Another tale from the area of Sockburn, also in Durham County, tells of a young knight named Sir. John Conyers, who hunted down one such creature after it had purportedly terrorized the land for 7 years. He would find it and kill it at the River Tees, after which he buried it under a huge gray stone. The slaying of this Wyrm was such that it propelled the reputation of the Conyers family considerably, and any new Bishop of Durham was ceremoniously offered the blade with which the beast had been killed. One Bishop who received this ceremony would say of it in 1661:

The confluence and alacrity both of the gentry, clergy and other people was very great, and at my entrance through the river Tees there was scarce any water to be seen for the multitude of horse and men that filled it, when the sword that killed the dragon was delivered to me with all the formality of trumpets and gunshots and acclamations that might be made.

It seems curious that so many similar tales should originate in the same region, but whether they were ever based in any way on some real creature we will never know. Regardless if there is any grain of truth to the tale of the Lambton Worm, it has gone on to become a tale told throughout the centuries in literature, poetry, song, theater, and film, cementing itself as one of the regions most famous legends. To this day one can find landmarks associated with all of this, including Lambton Castle, and a place called Worm Hill, where the creature was said to lurk, and at the very least it is a very intriguing tale of monsters of the past, be it something with an iota of reality or merely a mythical construct.

When Cryptozoological Creatures Get Very Creepy